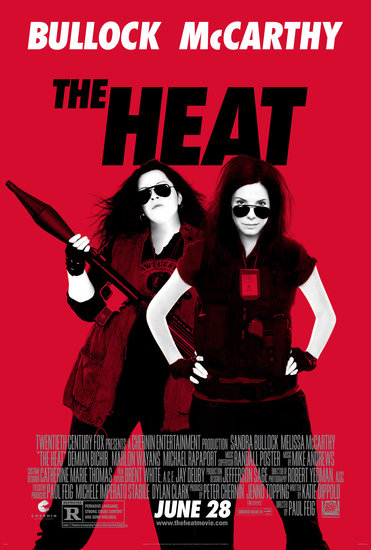 I wasn't especially excited about The Heat when I first saw the trailer, but when my sister asked me to come along, I figured - why not? I like buddy cop movies. I like Melissa McCarthy and I have occasionally liked Sandra Bullock, in movies that don't involve football. Or people in comas. It shouldn't be that bad.

Well, you guys, I saw The Heat, and I loved it. It gave me feels - and not just any feels. Feminist feels. Bechtel-Test-passing feels.

The film opens on both protagonists doing what they are best at: the tightly-laced analytical FBI agent Sarah Ashburn (Sandra Bullock) uncovers drugs and guns in a house her male colleagues have already searched and deemed clean, and wildcard Boston cop Shannon Mullins (Melissa McCarthy) takes down a misogynistic john and a neighbourhood drug dealer.

It's that drug dealer who brings Ashburn and Mullins together - Ashburn, gunning for a promotion, has been tasked with tracking down Boston's most notorious drug kingpin, and Mullin's perp is one of his lackeys. Naturally, this means Ashburn and Mullins must work together to solve the case, and in terms of storytelling, it follows the formula of odd-couple buddy cop movies pretty faithfully - first they don't understand each other, then they bond as their partnership becomes more effective, then they royally screw up and lose their superiors' support and have to fix things on their own, and so on and so forth.

It's pretty much just like any other buddy cop movie, with a lot of really effective humour and dialogue, even if the pacing does sag a bit in the middle. And that's why I liked it.

The Heat gave me seriously awesome feminist vibes for several reasons. First off, while the film is full of jokes, absolutely none of them are about Melissa McCarthy's weight. None. Her body size isn't even mentioned, by the good guys or villains. Now, while I'll admit that I've laughed at fat jokes and even laughed at McCarthy intentionally being the butt of fat jokes, it was refreshing to be able to laugh at something else about her for a change - like how her character is a trigger-happy, fast-talking slob who is a weapons violation waiting to happen.

Second, while there is a very light flirtation between Ashburn and an adorably restrained FBI officer played by Marlon Wayans, neither heroine is overtly sexualized. There is a scene in a nightclub where Mullins tries to "sex up" the buttoned-down Ashburn's wardrobe with a pair of scissors and some imagination, but the result winds up cannily parodying the "DIY makeover" trope so common in romantic comedies.

As well, neither heroine is threatened with gendered or sexual violence. They are shot at, tackled, hit, stabbed, sure, but these are pretty standard-issue cop-movie injuries. There are no rape threats. There are no scenes where the villain sniffs the heroine's hair and says he'll have his way with her before killing her. There is a comment where a torturer who likes to use an oyster shucker asks if the subdued heroines would like "their oysters shucked," but that's the extent of it.

Lastly, both Ashburn and Mullins start out the film as pretty unpleasant people. Ashburn is a straight-laced, by-the-book character who is very aware of her own strengths, and thus comes off as condescending, detached, and abrupt in social situations. At the beginning of the film, her director admits he's not sure she's a good fit for the promotion because none of her coworkers like her. She's received dozens of complaints for arrogance and showboating.

Mullins, meanwhile, is extremely vulgar, immature, violent and crass. She lobs insults and profanities at anyone who annoys her for so much as a moment. When the FBI horns in on her case, she spends a solid ten minutes reaming out her police captain in front of the entire precinct and dumps out the contents of Ashburn's briefcase in a childish rage. She's also promiscuous - several times in the film she runs into heartbroken one night stands and she's not shy about letting them down less-than-gently.

And yet, what's awesome about The Heat is that these female characters are allowed to be unpleasant. Hollywood movies have no shortage of heroines who start out mean or nasty - but the healing power of Love and/or Friendship is quick to teach them the importance of opening up, learning to express their feelings, making friends, and smiling more. Hell, look at Bullock's resume - in both Miss Congeniality and The Proposal, she starts out as a lone wolf who does things her own way and is disrespected by her peers, but thanks to learning that Beauty Pageant Contestants are Nice People and Ryan Reynold's Abs Are Magic, she learns the error of her unladylike/ice queen ways.

Of course, both Ashburn and Mullins learn and change in this movie - they develop respect for the others' policing methods, they learn to recognize their own self-destructive behaviours, and they do end up as close friends - but they also don't suddenly become nicer people. At the end of the movie, Ashburn is still as straight laced and confident as ever - and if her hilarious stunts with the villains are any indication, she won't be giving up "showboating" anytime soon. And one of the film's final scenes shows Mullins casually pulling a gun on a nurse in a hospital so she can still talk on her cellphone.

I loved this and the fact that the movie makes us think about this. Yes, Ashburn is disliked by her colleagues for her "arrogance" and "showboating" - but neither of these complaints have anything to do with her skills as a FBI agent, just her behaviour while using those skills. Her colleagues are all men over whom she has authority and the film's first scene involves her chewing out her all-male FBI taskforce for their carelessness in searching a drug den. So her (male) coworkers hate her because she's abrasive, rude, and superior - and yet the Male Authority Figure Who Is Loud, Rude, Abrasive, and Never Satisfied is such a popular cop procedural trope that the movie Last Action Hero made fun of it. In 1993.

The fact is, when it comes to traditional storytelling, male protagonists have to be interesting, but female protagonists have to be likeable. During my time in the romance novel community, I learned that readers tended to be harder on the heroines' behaviour than the heroes' - heroes could get away with being seducers, pirates, kidnappers, convicts, even rapists; while heroines could be dismissed for being merely cold or emotionally distant.

This comes from a deeply ingrained societal expectation that women should be nice. They can do anything a man can do - of course they can - but there's nothing wrong with being polite and respectful about it! And of course men are expected to be polite and respectful, too - but when the chips are down and the clock is ticking and lives are on the line, sometimes a man has to take drastic measures!

When The Heat begins, Ashburn and Mullins are already supremely talented members of law enforcement - they're just not very humble or nice about it. And the film allows them to remain that way. They learn more about themselves, and learn more about each other, and learn to search beyond their own perspective and prejudices - but none of this results in them toning down their personalities or being more modest about their skills or being more polite to their colleagues.

Which is pretty much how their male counterparts in buddy cop movies are allowed to operate. Sure, Axel Foley learned a few things about Beverly Hills, but he never stopped being an arrogant wiseass.

So, as weird as it sounds, the best part of The Heat as a buddy cop movie was that it was just like every other buddy copy movie - with great jokes, hilarious chemistry between the leads, and a fair amount of explosions and flying bullets.
A-
Posted by AnimeJune at Saturday, June 29, 2013