"Fire with Fire," by Jenny Han and Siobhan Vivian (SimonTeen, 2013) 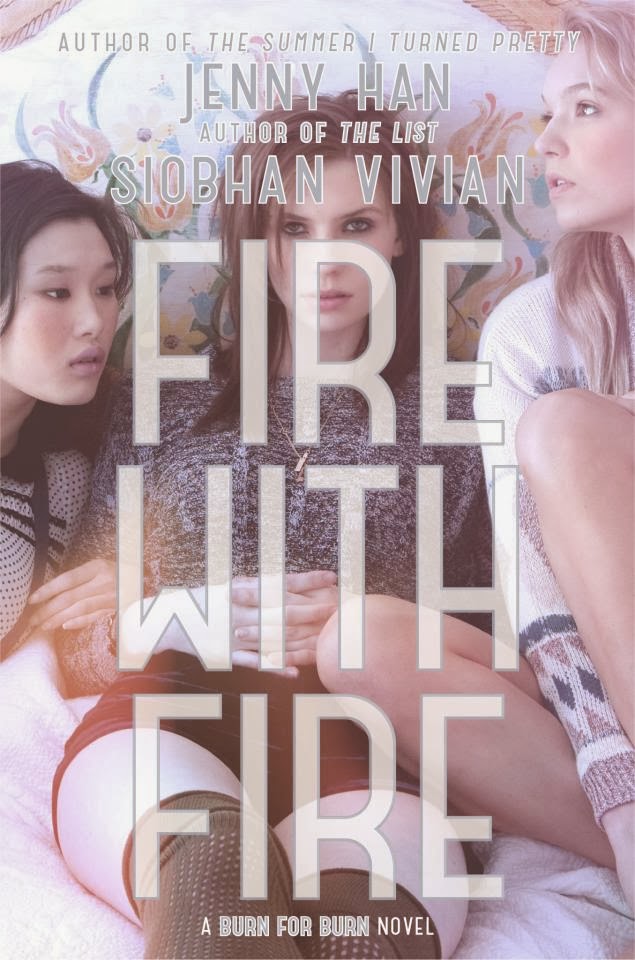 Lillia: Since winning Homecoming Queen, she now has to weather the brunt of her frenemy Rennie's anger - and now her friends want her to go after Rennie's crush Reeve to score two revenge birds with one stone.

Kat: College applications are coming up, so this girl from the wrong side of the island will have to clean up her act if she wants to get into Oberlin.

Mary: While watching Reeve suffer after the events of Homecoming feels good, she worries that she'll never be fully able to recover from what he did to her. Does this mean more revenge is required?

Rennie: While temporarily ousted from the top of the Popular Girl Heap, she refuses to take her de-crowning lying down. And first on her Shit List is her former BFF Lillia.

Alex: A pretty decent, super-rich and super-hot guy who has an enormous heart-on for Lillia - but might have a side-crush on Kat. Drama!

Reeve: Jar Island's resident Bad Boy refuses to slow down - even after breaking his leg during Homecoming. But he may not be as confident (nor as remorseless) as he seems.

The Word: In Siobhan Vivian and Jenny Han's utterly addictive and enjoyable Burn for Burn, our heroines Lillia, Kat, and Mary sought vengeance against their high school tormenters. By the end of the novel, they'd managed to rob Mean Girl Rennie of the Homecoming Queen crown, lace bad boy Reeve's drink with liquid Ecstasy, and destroy a good portion of the gym when Mary unexpectedly pulled a Carrie.

However, there's no rest for the revenging. Reeve ruined Mary's life when they were kids, but even though he's now lost his football career and his college scholarships thanks to his drugged-out accident at Homecoming, he refuses to acknowledge any remorse for the pain that he's caused. Then Mary discovers a surprising secret: Reeve's got a crush on Lillia.

Mary and Kat concoct the perfect plan - Lillia will seduce Reeve, win his heart, and then smash it into a million pieces. However, the more time Lillia spends with Reeve, the more she discovers he's not (entirely) the total asshat he appears to be. Rennie, however, has now turned against her former BFF Lillia, and doesn't hesitate to make her new hostility known.

Revenge is still an important part of the novel, but in Fire with Fire, the focus is more on the consequences of vengeance and on moving on from the pettiness of high school. Kat and Lillia are looking at colleges now, and as they prep for their admissions essays and extracurriculars, the teenage conflicts of yore seem relatively small potatoes. Mary, meanwhile, has to contend with the psychic powers (for reals) she unleashed at Homecoming, new powers that may or may not be connected to her aunt Bette's increasingly irrational behaviour. While the "twist" is pretty easy to guess, the hints and nudges are integrated well into the story and contribute to a pretty spectacular climax.

Fire with Fire isn't really a paranormal YA, though - it's more a contemporary YA....with a light paranormal glaze? It's more about female friendships and growing up and moving on from crappy experiences. All three protagonists have tragedies in their backgrounds that they don't know how to move on from (Lillia's rape, Kat's dead mother, Mary's suicide attempt) and those parallel nicely with the high school crimes they're working so hard to avenge.

Fire with Fire, I'm happy to note, loses none of its momentum from Burn for Burn. It's equally heartfelt, funny, insightful, and crazy-addictive as our three heroines pursue their friendship beyond mere co-avenger status, develop crushes on boys (of both the right and wrong kind), and wonder about their respective futures. I love all three heroines - they're each so different, so interesting, and bring their own dynamic to the trio.

Narrative-wise, Fire doesn't really stand on its own, but it's not meant to. It reads more like an extension of Burn for Burn, and I think all three books (including the finale, Ashes to Ashes) are meant to be structured as a single enormous story broken into three pieces. Fire maintains nearly flawless pacing as it ramps up the excitement and tension from the first novel, while also introducing new themes and characters. It's a fluffy guilty revenge-y pleasure - but with substance. And forethought. And awesomeness.

In case I haven't made this clear enough already, I adored Fire with Fire. A lot. As much as (if not more than) Burn for Burn. I cannot recommend this series enough. Awesome heroines. Deep themes. Delicious soapiness with interesting commentary. Also, psychic powers.