The 167-Page Drop: "The Postmistress," by Sarah Blake 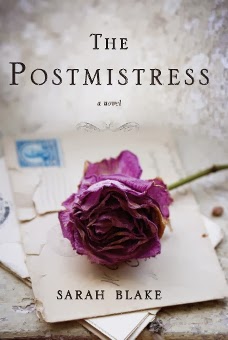 So - why did I pick this book?

Good question. It had an oh-so-fancy literary-ficion title, and that so classy old-fashioned-looking cover, with its crinkled paper and faded, dried rose!

It lured me in with an interesting time period (1941) and a drama-proof setting (small town Massachusetts and London) and the promise of secrets and, presumably, a postmistress who does something interesting.

The 40-year-old postmistress in question (whose name I have already forgotten) starts the book off in fantastically creepy form by going to her gyno to have him check her, uh, PO box and write a doctor's note declaring her virginity. She has a crush on Harry Vale, a regular visitor to the post office in their tiny town of Franklin, MA, and is convinced that all men prefer to have their women's hymen-status notarized.

Her doctor is royally creeped out by this, but her move inexplicably works. Hooray! This is the most original and interesting thing to happen in this whole novel!

In the same town, a young orphaned woman (whose name I've also forgotten!) moves in with her new husband, Will Fitch, who is the town's new doctor (not the virginity-officiating one). Unfortunately, thanks to Daddy Issues, Dr. Fitch has an incurable case of Mangst (Man-Angst) and when a patient dies in his care, he abandons his wife like a selfish asshole to volunteer his services to the victims of the London Blitz. In London. While his friendless, orphaned, pregnant wife is left to wallow in her misery back home. What a prince.

There he meets Frankie Bard, an American journalist in London who works for BBC radio, broadcasting stories of London's suffering across the Atlantic in an effort to galvanize the United States into joining World War II.

And that's about it. Although the historical details are well developed and the writing is gorgeous, there is little to no plot. I found myself halfway through the novel, still somehow convinced that I was reading the introduction, still waiting for the inciting incident to happen. By more than halfway through, all the events still seemed so unconnected, so unimportant, and so boring.

I wouldn't say it was a terrible novel (I did learn some new things about the Blitz, and how legitimately awful it must have been for the people living in London during it), but honestly, historical details and pretty words mean less than nothing if there isn't a solid plot or story to hang them on. Or at least a story that occurs before the 167 page mark.

Return to sender!
DNF
Posted by AnimeJune at Friday, October 25, 2013