"To Have and To Hold," By Patricia Gaffney (Penguin Reissue) 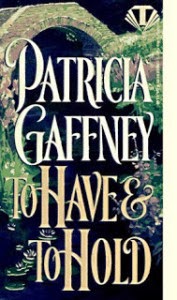 The Chick: Rachel Wade. A convict who's just been released from a ten-year prison sentence for the murder of her abusive husband.
The Rub: She's saved from returning to jail when she's hired by a local viscount - who has seduction in mind even as he holds her freedom in his hands.
Dream Casting: Anne Hathaway.

The Dude: Sebastian Verlaine, Viscount D'Aubrey. A bored and debauched viscount who's looking for a challenge, any challenge, to amuse him out of his apathy.
The Rub: When he encounters an emotionally frozen woman charged with the murder of her husband, he sets out to untangle her secrets for his own entertainment - until he realizes he's far out of his league.
Dream Casting: Jake Gyllenhaal.

Sebastian: I hope you like sex! Because we're totally going to have that at some point!

Sebastian: I totally mean it! Because I love sex. And you have to do it or I'll fire you!

Sebastian: ....that was less fun than I expected.

Sebastian: OMG I am a terrible person who's accomplished nothing with my life! *falls into depression*

Rachel: For pete's sake, snap out of it.

Sebastian: But now I love you! For reals! And I will prove it with puppies and sexy baths and fully consensual lovemaking!

Evil Conspirators: Too bad Rachel's going back to prison!

Random Character From a Previous Novel: Hey look guys, a random letter that completely excuses Rachel of any wrongdoing!

But ... I'd heard a lot about Patricia Gaffney's To Have and To Hold, a classic romance from the '90s that's recently been reissued in eBook form. However, several reviewers that I trust (or at least whose reviews are enjoyable and comprehensive) reviewed it positively, despite its controversial plot line that has the hero raping the heroine. After finding out it was on sale from Kobo, I nabbed it and decided to see for myself.

And, you guys, I loved this book. Even with the rape scene and the hero's behaviour towards the heroine in the beginning. I'm normally someone who despises abusive heroes and rapes in romance - so why did I still enjoy this novel to the extent that I did? And moreover, how did I still buy the romance between Sebastian and Rachel?

Well, I think one difference is that the narrative does not support the hero's actions at all. At the beginning of the novel, Sebastian is very clearly a jaded, cynical, selfish and manipulative cad. Growing bored with his luxurious life, he turns to debauchery and mind games to entertain himself. When he drunkenly agrees to serve as a magistrate to the village on his property, he hears the case of Rachel Wade, a woman picked up for vagrancy. Even better - she's only just been released from a 10 year prison sentence for murdering her husband a week into their marriage.

Intrigued by Mrs. Wade's indifferent numbness to the world around her (especially the prospect of being sent back to jail for the "crime" of not finding work), he hires her on as his housekeeper in order to toy with her implacability and eventually seduce her.

I was able to tolerate this plotline because the narrative refuses to frame any of these actions in a positive light. Sebastian is a cruel child with a stick and Rachel is the anthill he's eager to poke in order to see how its insides work. The narrative never ascribes any secret selfless meanings to Sebastian's choices, or offers up any Abusive Childhoods to blame for his failings. Moreover - the heroine is fully aware of what Sebastian intends, even though she knows her employment with him is the only thing keeping her from returning to prison.

And, yes, he rapes her. Whitney My Love portrayed Whitney's rape as a punishment that Clayton took a wee bit too far because he's Just Such An Overwhelmingly Passionate Manly Man. The Lady and the Libertine enforced the idea that it wasn't rape because the Hero Had a Secret Heart of Gold and also the Heroine Liked It. In THATH, however, it is clearly depicted as rape - despite the fact that it's not violent and Rachel physically acquiesces. It's an intense and interestingly written scene, because it's so clear that while Rachel physically capitulates to save her job, she mentally, emotionally, and spiritually resists Sebastian's attempts to get under her skin.

The reason I could tolerate Sebastian's behaviour is that his horribleness is the point of the story and something he learns to recognize as his character develops. Sebastian's attempts to play at being evil help him realize what evil really is as he discovers more about Rachel's past, as he finds out there is nothing he can do to her that she hasn't already endured, survived, and recovered from. As a result, while he pursues Rachel to find out more about her - he only finds out more about himself, and it's not pretty. Sebastian's epiphany (i.e. that he's a shitful person) is a mesmerizing scene that makes the entire book. For the rest of the novel, Sebastian struggles to pull himself out of the jaded rut he's found himself in and defeat his boredom by pursuing meaning, rather than distraction.

And Rachel - wow Rachel. She is such an amazing and complex character. When we first meet her, she is a bare husk of a person, pared down to the essential drive of surviving in the moment. There is no past, there is no future, there is only existence - but as she spends more days in freedom, she slowly expands the limits of her perception.

I loved the parallels between Sebastian's and Rachel's development: they both struggle to break free from their habitual ways of thinking. Of course, Sebastian's limited life is due only to his own selfish indulgence whereas Rachel's was forced upon her (and the "mystery" of who really killed her husband ... isn't really a mystery), but they both have to break free of their comfort zones and I appreciated how their characterization dovetailed.

And really, Patricia Gaffney's writing is exquisite. She has a gift for cutting into her characters' thoughts and intentions and picking them apart with careful thoroughness - and I think that's how I could never truly hate Sebastian. Because I knew him too well, and I could see how hard he tried to change in the second half of the novel.

There are probably lots of people who still won't like this novel because of the rape element, and they are more then entitled to. The first half of the novel is meant to be excruciating - and your enjoyment of the novel hinges on how well the second half convinces you that things can be different.

For me, the brutally objective portrayal of Sebastian in the first half, coupled with the gorgeous writing and characterization in the second half, sold me on this novel, and on Patricia Gaffney's awesomeness. It's refreshing to find awesome new romance authors while I'm still struggling with my apathy with the genre.
A+
Posted by AnimeJune at Sunday, October 27, 2013