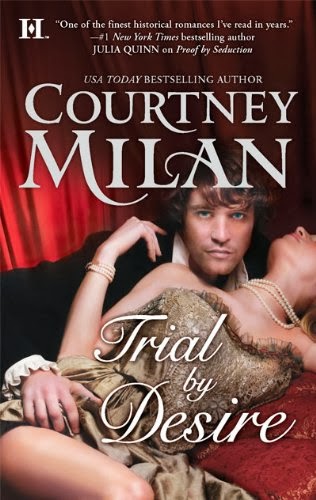 The Chick: Lady Kathleen Carhart. While hiding beneath the guise of a flaky society lady, she secretly saves women from their abusive husbands.
The Rub: Her estranged husband unexpectedly returns - right when she's hiding the battered wife of one of his bros.
Dream Casting: Rose McIver.

The Dude: Lord Ned Carhart. A young aristocrat who went to India to atone for his feckless youth and gain control over his depressive moods.
The Rub: He's back in town, but his wife threatens his tightly-held control over his emotions.
Dream Casting: Tom Mison.

Kate: Now that we're married, can we have sexytimes now?

Ned: NOPE SORRY, MY MANFEELINGS TELL ME I HAVE TO GO TO INDIA KTHXBAI.

Ned: Sup. I'm back. What's with the cold shoulder? I abandoned you for three years, refuse to have sex with you or touch you, and ignore everything you actually say because I'm only thinking of your comfort.

Kate: You're a moron. *hies off to save ladies*

Ned: Wow! You save ladies for a living! Clearly I've come in at just the right time to do everything for you and save everyone because I'm a dude!

Kate: I am inexplicably unoffended by this. Proceed!

Ned: Oh bee tee dubs, I have depression but I've decided to trust you now because I feel like it.

The Word: This was an interesting novel to read because there was an enormous gap between how much I loved the heroine - and how incredibly annoyed I was with the hero.

The novel opens with our hero, Ned (who we previously met in Milan's debut novel Proof by Seduction) abandoning his wife of three months to battle his personal demons in India.

His abandonment devastates his new bride, Kate, and leaves her with a whole host of trust issues and a burning desire to prove to herself that she's more than just a wife to be laid aside like an accessory. So ... she becomes a Battered Woman Saver, secretly using her wealth and status to spirit away abused wives and give them new lives and identities in America.

For reals. Her newest case is her friend, Louisa, Countess of Harcroft. Her husband, the Earl of Harcroft, is a vicious abuser who has already started threatening their infant son, Jeremy. Louisa's husband's high rank and her baby being his heir make this Kate's toughest case yet, and she can't afford to make a mistake.

So, of course, this is when Ned decides to make his glorious return - three years after deserting his wife to fart around in India. And did I mention he and Harcroft used to be bros? Kate (who is hiding Louisa and her baby on her property) obviously can't afford to trust Ned with her secret.

I was consistently infuriated by Ned in this novel. We're clearly meant to empathize with him more than Kate because, as we soon learn, he suffers from bouts of terrifying clinical depression. Which sucks because, well, it's the 19th century and people hadn't even identified it as an illness yet, much less developed treatment for it.

I tried to empathize with Ned, really I did. I understood his dedication to physical activity and why he was constantly challenging himself and creating intentionally uncomfortable environments in order to keep himself mentally alert. I also understand that depression is something that only the sufferer can really deal with. Unfortunately, the bulk of his condition more or less translates into the common hero angst of, "I can't be near the heroine because she makes me feel the powerful Man Feels that are too manly for her delicate female sensibilities!"

His own capacity for empathy is breathtakingly shallow. He shows up after three years and spends much of the first half of the novel befuddled at Kate's anger with his past absence and present refusal to do the nasty. Can't she tell that he's only protecting her from his Big Bad Man Feelings? Can't she tell, magically, that he's doing all of this for her own good?

I understand that the running emotional subplot of this novel is Ned's realization that Kate is her own awesome heroine, doesn't need rescuing from him and that he doesn't have to be Big Strong Hero Ned around her, but he never really loses that condescending vibe - especially with his patronizing attempts to emotionally manipulate her into trusting him.

Kate, on the other hand, is pretty freakin' awesome. She's a gallivanting Lady Batman who saves abused women while hiding her true identity beneath the veneer of an airhead debutante. Of course, the downside of that veneer is that even the people close to her believe she's too delicate and flighty to participate in intellectual discussions, and her loneliness is starting to consume her. I loved her character and her conflict and also her refusal to put up with Ned's ridiculous angst.

All in all, Trial By Desire is kind of a middling novel - it's got a good set-up with a strong heroine, but a condescending and oblivious hero coupled with inconsistent pacing and a strangely anticlimactic ending.
C+
Posted by AnimeJune at Monday, October 21, 2013