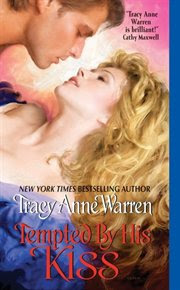 The Word: As I discovered while reading Meljean Brook's Demon Moon, life's too short to read boring books (note the word choice - bad books can still be really entertaining!).

As it happens, I had a terrible first impression going in to Tempted By His Kiss. There was absolutely nothing about this book that stuck out as interesting or particularly original. It just seemed so tired and done before - and this was just in the first chapter. So I set myself a goal - I'll read the first 100 pages, and if the novel doesn't pick itself up from the Bare Minimum of Writing Effort by then, off to the secondhand bookstore it goes!

Well, here you are and here am I, and I'm already reading something different. But that doesn't mean you guys won't get a review.

Tempted By His Kiss is the first in Warren's series about a wa-ha-hacky English clan of Crazy Hot Angsty Dudes (and The Token Crazy Hot Sister). The language is the standard exaggerated, repetitive style that permits sweeping blanket descriptions without actually putting anything in detail - the perfect style for wallpaper historicals. Seriously, I wanted to take a red pen and scratch out every last appallingly redundant use of the words "feminine" and "masculine" as adjectives. We're romance readers - I think we can infer that the lady is ladylike and the man is manly. Move on, please.

Anyway, our hero is Cade Byron, and we know he's the hero because his presence allows me to scratch off the Hot Recluse, Empathy-Baiting War Injury, and Sad Spy Past squares on my Regency Hero Bingo Card.

He's drinking alone and brooding, having literally nothing better to do with his time, when our heroine barges into his house and demands his hospitality. I'm not exaggerating. It's the middle of a blizzard, there's no one around for miles, and her carriage has broken down so she basically calls him out for not bringing out the welcome mat to a total stranger. Cade eventually acquiesces (even though the heroine, Meg Amberley, is SUPER RUDE) because he's not a total ass, but he still intends to keep to himself.

But NO. Meg is not only SUPER RUDE, but SUPER INVASIVE and ENTITLED. Pretty soon, she's barging in on his privacy and criticizing his personal life and, within the FIRST DAY, starts making uninvited comments about Cade's hand-waved Angst-Device Alcoholism. I'm sorry, you do just DO NOT make comments about a person's addictions the first day after they've let you shack up in their house. I'm pretty sure Emily Post dedicated an entire page to that, somewhere.

And on top of having the standard "feisty marshmallow innocent" personality and a total lack of boundaries, Meg is described as a lithesome white-blond angel with gorgeous blue eyes and teeny-tiny hands. There are seriously too many words used to describe how tiny her hands are. I mean, it's alright to use it once when it's in a direct comparison to the hero's, but I mean, tiny hands don't seem hot to me - they just remind me of this: 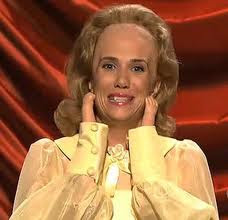 So anyway, Meg beats Cade at chess and gets him to open up more and they make happytimes of the "told instead of shown" variety. Yawn.

Eventually things take a turn for the creepy when Cade slips on some ice and lands on his Injured Thigh of Angst and has to take some laudanum to get some sleep. Laudanum, unfortunately, gives him terrible Exposition Nightmares, where we learn his horrible past where his French peasant girlfriend was raped and murdered when his spy cover was blown.

Wow. Okay - that's some legitimately dark material Cade has to work through. I kind of get the reclusiveness and the hand-waved alcoholism - but then Meg RUINS IT.

Meg, SHE WHO HAS NO BOUNDARIES, hears him cry out and goes into his bedroom to investigate. While he's moaning in very obvious distress, Meg takes a moment to admire how sexy he is - you know, when he's writhing in the midst of narcotic-fuelled night terrors. So hot. Then she decides to calm him down by stroking and petting him.

At this point, Cade appears to come to, and almost immediately starts pawing her boobs. Meg knows this is completely inappropriate but Cade is apparently SO GOOD that even half-drunk and coming out of a coke dream he's too seductive for Meg to resist. Until he murmurs another girl's name - then Meg gets all hurt and realizes she doesn't want to date-rape him after all, and skedaddles.

Cade finds her hair ribbon in his bed the next morning, however, and concludes that two plus two makes semi-consensual sexytimes. They only have time for about half of One Incredibly Awkward Conversation before a Human Plot Device barges into Cade's house (LIKE, SERIOUSLY, CADE, DO YOU NEVER LOCK YOUR DOORS?) and spots the two of them and suddenly they must Fake an Engagement to save Meg's reputation, and of course faking an engagement absolutely requires Meg meet Cade's Sequel-Baiting Family.

And that was the 100-page mark. I very lightly skimmed the rest to see if anything else of note occurred - OF COURSE Cade's family is perfectly loving and inviting, because there have NEVER been ANY families who disagree on certain points, and of COURSE they love Meg TO PIECES, because there have never been wives who have been disliked by their in-laws in the history of time. Tracy Anne Warren steals feathers from the caps of Quinn, Ashley and Balogh by having an Older Brother Responsible Duke character doubtless reserved for the last novel in the series.

I mean, I get it, sort of - it's the "fantasy" element of romance where the heroine who has no family is adopted into a large, happy one. BUT - every other romance novel with a family does this. Every dynamic has been done before, none of this is original or captivating. This novel offers NOTHING new to the genre at all.

Eventually, an evil French spy returns to plague Cade, but no one believes Cade, his alcoholism is magically hand-waved away because he's got the love of a good woman and at one point Meg manages to stretch her itsy-bitsy digits around the trigger of a gun and shoot someone.

"Don't move or I'll shoot!"
Blah. No thanks. Again, the only scene that really got a rise out of me was the coke-dream scene, but other than that - it was just bad. And not even uniquely bad in an entertaining way - just bad and familiar enough to be annoying.

So I'm off to greener reading pastures!
DNF