"Sins of a Wicked Duke," by Sophie Jordan 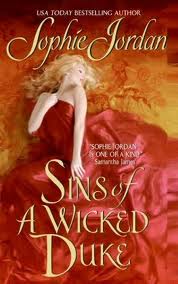 The Chick: Fallon O'Rourke. When she's fired for the umpteenth time for not giving into her employer's licentious advances, she decides to disguise herself as a man and find work as a footman.
The Rub: However, she's soon hired by the most notorious womanizer in London! Will she be able to hide her identity?
Dream Casting: Bryce Dallas Howard.


The Dude: Dominic Hale, Duke of Damon, a.k.a. "The Demon Duke." He refuses to live by society's rules, ever since he was abused as a child.
The Rub: Not living by society's rules is really boring, lonely work.
Dream Casting: Tom Cruise by way of Stacee Jaxx from Rock of Ages.

Dominic: Hey! Pretty girl! Let me seduce you by snogging a prostitute in front of you!

Fallon: NO! GROSS! *leaps from carriage*

Fallon: Crap! Now that I'm in drag as a footman, I have to work for this creep!

Dominic: Hey, footman! Serve me while I sleep until noon, seduce married women and laugh at their gun-toting husbands, and act like a jerk to my lovers ....

Dominic: ...all the while sporting this Bad-Ass Snake Tattoo on my man-boob!

Dominic: But - I save urchins! And I'm a secret painter!

Fallon: *swoons* All is forgiven!

Romance Convention Checklist
LiveTweeted: My livetweets for this novel have been Storified here.

The Word: Fallon O'Rourke, our heroine, is a scrappy Irish lass who's had and lost more jobs than she can count. Thanks to her glorious mane of red-gold-honeymustard-passionfruit-pixiewish-coloured hair, she can only hold a job so long before a randy nobleman makes a pass at her, resulting in her sexy ass being fired. During one such encounter where her employer's son fires her for kneeing him in the balls, a well-appointed carriage rolls up and a gentleman offers her a ride.

Fallon (who's just realized she's used up her last chance with her employment agency and is now homeless) accepts - only to discover she's sharing the coach with a Duke of Slut and two of his Hos. The Duke of Slut is immediately attracted to Fallon, and his idea of seduction/hospitality is to have one of his hos 'be mother' while she watches - and I'm not talking about pouring tea.

Fallon is inexplicably turned on by this grossness, but when the Duke refuses to let her out of his carriage, she retains enough common sense to leap out of it at the first opportunity. The Duke follows her and gives her his card - as it turns out, he is a duke. Dominic Hale, Duke of Damon, to be precise. He promises that he's super good at sex, and then he leaves.

While Fallon stays the night with a childhood friend, she ponders her declining options. As a woman, she knows she will always be vulnerable to sexual advances and the ensuing dismissals if she refuses - so, on impulse, she cuts off her Magical Fantastic Hair, fakes some references, and shows up at her employment agency looking for work as a footman. Unfortunately, due to Plot-Propelling Coincidence, Fallon is hired by the Duke himself.

What follows is a disturbing and entirely unromantic mistorical rife with inaccuracies, shady moralizing and misogynist victim-blaming themes.

Dominic's father had such a terrible reputation that when he died and Dominic's maternal grandfather became his guardian, Dear Ol' Granddad consigned Dominic to the care of a zealot governess who physically abused him in an attempt to repress his bad genes and stick him to the straight and narrow. Since then, Dominic has intentionally lived a life of a licentious prick to stick it to the man. He's so bad, you guys! He even got a tattoo! Take THAT, Grandpa!

However, the truth is that Dominic is a disgusting, misogynistic narcissist who pimps his Sad Childhood all over town as a moral Get-Out-Of-Jail-Free card. Because he feels so dead inside and he's got a sad past, he's free to exploit, seduce, corrupt, and ultimately abuse women as he sees fit.

He comes equipped with a few tacked-on "sympathetic tropes," but they're only tenuously connected to his character or the narrative as a whole, since their entire purpose is to make Dominic look slightly less like a Completely Terrible Human Being:
The latter is the most hilariously out-of-touch indicator of his Secretly Sensitive Nature. You paint? That's nice, but at the risk of Godwinning, so did Hitler.

Fallon, meanwhile, has issues with blue bloods - her father was a gardener for a wealthy lord, only to take ill and die overseas on an errand for his employer. No matter that her father died of an unplanned-for illness doing what he was paid to do, Fallon believes her dad was all but bloodily trampled beneath the feet of every member of the House of Lords, and thus hates aristocrats with a Fiery Redheaded Irish Passion.

One would think this baggage, however overblown and unreasonable, would qualify Fallon for the presidency of the I Hate Dominic Hale Club. Well, you'd be wrong, and this is where the disturbing themes come into play.

The "romance" is completely and utterly unbelievable. Dominic is, at heart, a narcissist. Everything comes down to him and what he wants. His desire for Fallon (both during their first encounter and when he sees through her footman's disguise) is motivated entirely by how it makes him feel. Fallon's presence is the only thing that can pierce his numbness, so he craves it. Her feelings never factor into his equation. She makes him feel good, therefore she should be his.

One of the most heinous examples of this is the scene where Fallon, having been promoted to Dominic's valet, takes a bath in an adjoining room while believing Dominic is enjoying a prostitute. Dominic walks in on her naked and accosts her. Fallon tells Dominic to stop, but Dominic, "recognizing her desire," molests her to orgasm without her consent, and then snarls, "You're welcome!" You know, because he didn't get off. He's just selfless like that. He then proceeds to mope about how violated he feels for having been duped.

As well, he abandons his Tacked-On Sympathetic Tropes as soon as they become actually difficult, such as his reputation for protecting the females on his payroll:


She stared. Her breath rising and falling. "You said I would be safe from you."

He nodded fiercely, dragging a hand over his face. His every muscle strained to drag her back into his arms. "I did."

Her whispered accusation knifed through him. "I did not know I would want you so much." - p.243

Yup, he's sworn to protect his female domestics and would never exploit his power over them - unless he really really wants to. What moral fortitude.

Moreover, it's totally Fallon's fault that he really, really wants her. A lovely scene happens later when Dominic catches Fallon and another footman exchanging friendly, platonic banter. Dominic's narcissism causes him to project his violently possessive jealousy onto Fallon. He tells her, "You could be less provocative," (p.253) upgrades to "Perhaps you should rethink what you do around men ...  [you] Twist them into knots ... make them want you even when they know they should not" (p.253-54) and completes the Victim-Blaming Combo Move by shoving her against a wall.

And how does Fallon react to having him mansplain that her history of unwanted sexual advances is entirely the fault of her Nasty Womany Wiles? She kisses him. As you can probably tell, I'm not a huge fan of the heroine, either.

Ultimately, the hideous Orgasm-As-Consent and Orgasm-As-Love themes lie at the heart of the relationship in Sins of a Wicked Duke, because there's no other romantic development to be had. The couple share nothing in common and have almost no positive scenes together that aren't sex scenes.

Fallon has no reason to like Dominic - until she sees him naked and is aroused. Fallon clearly and distinctly tells Dominic to stop as he attacks her after her bath, but he makes her like it, so it's okay! Fallon, as a footman, witnesses Dominic's laziness, appalling treatment of women and disregard for the safety of his house and staff, and yet after one orgasm she is willing to convince others of his innate goodness despite witnessing no actual actions to back this up. Oh wait, I forgot - he paints. Just like Mother Teresa!

Dominic's attitude, behaviour, and actions remain unaltered by the book's end. He's simply "misunderstood." Can't you see? His precious paintings! His precious urchins! In the end, it is Fallon who has to learn to overcome her bigotry towards the One Percent and simply give in to her desires. I think I need to go take a shower.

Avoid this book like the plague.
D-
Posted by AnimeJune at Sunday, July 22, 2012