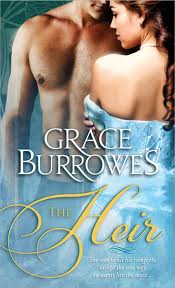 Another day, another DNF review. I was given this one at RWA last year and thought it sounded interesting - plus I'd been reading some pretty decent reviews on it.

So I gave it the 100 Page Drop treatment - I decided to struggle on for 100 pages, and if the novel didn''t picked up by then, it would get the boot. Unfortunately, it didn't.

The novel got on my nerves almost immediately - firstly, the hero's name is Gayle, which only makes me think of historical romance author Gayle Callen. Gayle has recently become the heir to the Duke of Moreland after two of his brothers passed away (one from the war [I think] and the other from consumption). The ensuing maniacal pressure the Duke has placed on his two remaining legitimate sons to Impregnate Them Ladies has caused Gayle to hide in London during a summer heatwave while his brother Valentine pretends to be gayer than a picnic basket.

While staying at his new townhouse, Gayle tries to help a chambermaid whose blouse buttons have gotten caught on a grate (for reals) only to wind up with a serious concussion after his misunderstanding new housekeeper Mrs. Seaton bashes him over the head. Upon learning the truth, Anna Seaton is terribly contrite and spends the next hundred pages plying Gayle with lemonade, muffins, and cookies.

While drinking glass after glass of lemonade, Gayle and Anna share polite, respectful banter - generally involving Anna mildly reproaching him for being rude and Gayle mildly apologizing. With excruciating slowness - and all the while munching on an exquisitely-buttered muffin - Gayle then makes respectful, wordy overtures to Anna, mainly involving how much he'd like to munch on her exquisitely-buttered muffin. Anna mildly flutters about how that would be inappropriate, Gayle backs off, and they drink some more lemonade.

Things pick up slightly after Gayle's pre-impregnated mistress tries to trick Gayle into claiming paternity for her baby during a hilariously awkward sex scene, and she reveals Gayle's father arranged the scheme because he is that desperate for Gayle to marry and breed. This results in a very brief shouted argument between father and son and Gayle's slightly more insistent - yet still respectful and wordy! - seduction attempts on Anna.

In one hundred pages, Anna drinks about 4,382 glasses of lemonade and hints at possible sssssecrets exactly once. Gayle's Fake-Gay bro Valentine shows up, necessitating more muffins and lemonade and verbose, circular discussions between the brothers on whether or not it's kosher to bang the housekeeper.

Nothing about this book was especially terrible or offensive - Gayle and Anna are pretty reasonable people who like to talk through their issues. However, the plot was slower than molasses and so much of the narrative was sucked up by minutiae to the point where nothing substantial had happened 100 pages in.

Skimming ahead, I was inundated by reams and reams of verbose dialogue that revealed absolutely nothing. The Hot Bastard Brother of Gayle and Valentine shows up. Their awful dad yells some more. At the very end, Anna's secret past is revealed to involve a Secret Sister and an unwanted engagement to a Fortune-Hunting Turd. Anna then takes a bullet wound which no amount of lemonade will heal, but somehow a HEA happens.

Don't worry about me, though, as I am already off onto greener reading pastures.