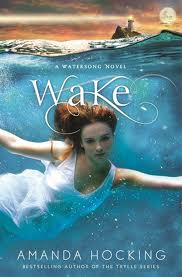 The Protagonists: Gemma and Harper. Harper is the overprotective older sister who's spent nine years raising Gemma after their mother was incapacitated by a car accident. Gemma just wants to swim and be a regular girl dating regular guys without her sister breathing down her neck.
Their Angsts: Three creepy, possibly-supernatural girls want to add Gemma to their special circle of BFFs - whether she wants to or not.

Brian: Gemma and Harper's dockworker dad. Does a good enough job, but hasn't gone out and socialized since his wife's head injury.

Alex: Harper's friend, and Gemma's crush. May also have a thing for Gemma.

Daniel: A hot twenty-year-old who does odd jobs around town and lives in a tiny houseboat. Harper hatelikes him because he's hot and jobless.

Thea: One of the Three Girls -  the Reluctant Redheaded One.

Lexi: One of the Three Girls - the Bubbly Blond One.

Penn: Leader of the Three Girls - the Bitchy Brunette One.

Marcy: Harper's unpleasant and venomous coworker at the local library.

Angst Checklist:
The Word: Gemma and Harper are sisters who live in the picturesque seaside town of Capri. Gemma is a talented swimmer with Olympic aspirations and a serious crush on Harper's geeky friend Alex - however, she seriously chafes under Harper's repressive replacement-parenting. Ever since their mother was mentally handicapped by a car accident and their grief-stricken father decided parenthood was a part-time gig, Harper's taken over and turned Shrill Overreacting Mothering into a science.

And then there are the girls: Thea, Lexi, and Penn, three mysterious, preternaturally gorgeous and confident girls who have suddenly moved to Capri. Everyone assumes they're tourists, but because they're extremely forward and unbearably pretty, everyone in town either hates or is afraid of them. When they start following Gemma around and inviting her to swim with them in the bay, both Gemma and Harper are extremely Weirded Out but the three girls won't be denied - they'll make Gemma one of them by hook or by crook.

I'll be blunt and say this novel supremely disappointed me, and I didn't have the highest hopes in it to begin with. This was a book I picked up at BEA thanks to the gorgeous cover, but the story inside is shoddily constructed out of cliches, flat characters, hamfisted writing, and troubling messages. I don't even know why I'm spoilering this, but the Three Girls are sirens. Really, really, obviously sirens. The book makes no attempt at suspense or surprise or development. Instead of giving us any spooky build-up as to why the Three Girls are eery and off-putting, the story simply gives us a bloody prologue that tells us right at the start that the Three Girls find boys Magically Delicious. No surprise. No discovery.

However, everything about this book is hammered over the head with the author's Tell Over Show writing style. There's no description, there's no opportunity for the reader to explore and interpret what's going on in the story - it's just plunked down in front of us like a day-old fish, whether it fits with the character's POV or not.

As well, all the characters and their relationships are so predictable and moth-eaten. Harper is the Girl Who Can't Have Fun, who spars with Daniel, The Slacker Boy With Hidden Depths - so naturally they fall for each other. Gemma's crush Alex is the Geeky Nerd - but of course, despite being on no teams and not exercising, he's still got fantastic muscles! Most disappointingly, the Three Girls are superficially-depicted almost to the point of parody.

I will grant this book points - Daniel and Alex are both very nice, respectful boys, with no jerkiness or stalkery behaviour written off as "boys will be boys." I also appreciated the gender-reversed dynamic of Gemma and Alex's relationship - in this paranormal YA, the boy is the sweet-natured, innocent human who's snooped at through his bedroom window and the girl is the man-eating creature who craves love more than human flesh (at least for now).

However, so much of this story is left open-ended - it has all the structure of a leaking bag of flour. There is no build-up, there is no resolution, there is no climax excepting a half-hearted, last-minute confrontation at the end that goes nowhere. I had a similar problem with The Vicious Deep - I've noticed recently that a lot of first novels set in prospective series don't have a conclusion or answer any questions because they're so bent on saving the interesting stuff for later books.

Every novel, regardless of its series order, requires a problem and a resolution. It's basic storytelling, and a series strong enough to stretch out over several novels should have more than one major problem or obstacle behind it, anyway. I might suggest the author read The Hunger Games trilogy (which, for all its faults, knew how to resolve a storyline while leaving an opening for future books) or some classic high fantasy trilogies.

Finally, my last problem was with the themes behind the depictions of the Three Girls. Thanks to an over-explainy prologue, the reader knows the Three Girls are up to no good, but the way the other characters justified their suspicion and hostility towards them was troubling. The Three Girls are depicted as off-putting and terrifying, to the point where people will cross the street to avoid them - and why? Because they're too pretty (and wear revealing clothing). They're too confident. And they travel in packs. To be fair, they do eat people, but I kept asking myself, why is their beauty, their confidence, and their friendship depicted as a threat? Why are we expected to fear pretty, confident girls who stick together?

The book skirts the line with this theme, with off-the-cuff scenes like one where Harper ruminates on how she doesn't have prejudices against anyone, even pretty girls, and I wanted to ask, "why EVEN? Why should pretty girls EVER be subjected to prejudice?" And there's another awful scene where Harper's venomous female coworker out-of-the-blue insults the Three Girls by accusing them of being bulimic. Because they're so hot, you see - and that's somehow offensive. If this was an attempt at satire, it's a poor one (and Jennifer's Body did it a bajillion times better), and comes perilously close to body- and slut-shaming.

All in all, Wake is a novel to avoid. If man-eating hot girls is your bag, I'd recommend the far superior and snarkily clever Jennifer's Body instead.
D+
Still interested? Wake comes out August 7th. You can preorder here.