"A Season To Be Sinful," by Jo Goodman 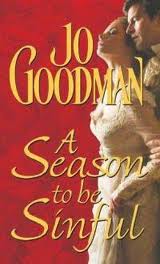 The Chick: Lily Rose, a.k.a. Lilith Rose Sterling. An aristocrat by birth and an orphan by fate, she survived on the streets by instructing gutter children, until her interference in what looks like the robbery of a nobleman gets her grievously injured.
The Rub: The nobleman takes her to his own home to help her convalesce, but she knows that any relationship with him will only risk the anonymity she's used to hide from a monster in her past.
Dream Casting: Jessica Chastain.

The Dude: Alexander Henry Grantham, Viscount Sheridan, a.k.a. "Sherry." When a young woman tackles him and takes a knife wound meant for him, he takes her and her orphan charges under his wing.
The Rub: As he learns more about her past, he starts to realize they have more connections in common than they thought - dangerous connections. Can he risk bringing them to light?

Sherry: Well, crap. Here, have my doctor and my house.

Lily: I am highly suspicious of your kindness!

Lily: Just FYI, you'll have to wait through 200 pages of us talking before you get anywhere.

Sherry: Sounds good to me.

Lily: CURSES! I am undone by your bottomless understanding and compassion!

Bad Guy: Hey guess what I was an evil dude to BOTH of you!

Lily: Expose him, but don't kill him.

Lily: Fuck it, just kill him!

Romance Convention Checklist:
The Word: I was beginning to get a little worried about Jo Goodman. I have seriously loved some of her books - like The Price of Desire and If His Kiss is Wicked, and yet, I was supremely annoyed by Tempting Torment and bored to tears with Never Love a Lawman.

Perhaps the distinction has to do with setting. Torment and Lawman are both set in America (although Torment is a mix of Regency and post-Civil War American rather than a true Western like Lawman), and maybe Goodman's attention to detail grows dull when her attention falls on details that don't interest me at all

Or maybe the first two books I mentioned simply play by a formula that is my personal brand of literary heroin, and A Season to Be Sinful falls into the same category: that of a rakish but ultimately noble hero who comes to heal, support, and rescue a supremely competent yet horrifically damaged heroine.

Viscount Sheridan, known as "Sherry" to his friends and associates, is leaving the theatre with his mistress when an altercation breaks out and he is thrown to the ground by an unknown assailant who winds up stabbed for his trouble. Sherry emerges from the incident shaken but unscathed. Days later, when he's about to depart for his country estate, Sherry is accosted by three street urchins who demand money for a surgeon to help the woman who wound up stabbed - by him, they think.

Sherry summons his personal physician and comes to the aid of the woman, the urchins' mentor, who is now in the grip of a deadly fever from her infected knife wound. Sherry is intrigued by the fact that the young woman, in her brief moments of lucidity, speaks with an upper class accent. He is further moved to help her by his growing suspicion that she took a blade that was meant for him. Sherry, it appears, has only recently retired from a secret double life, but that doesn't mean his enemies aren't still punching the clock.

When Sherry moves to transport the woman (Lily) and the three boys - Pinch, Dash, and Midge - to his home, Lily's not sure what to believe or who to trust. Still effectively in hiding from a monster with a gentleman's name who inflicted years of brutal torment upon her, Lily does not believe that men like Sherry perform kind acts without expecting something in return, and yet her repeated attempts to provoke his anger or reveal his perfidy come to naught.

Just like my two previous fave books of hers, the joy of A Season To Be Sinful comes from observing how Lily's emotional defenses melt by deliciously slow inches - and Sherry's too. He's a very reserved man, one who's worked hard not to call attention to himself after his mischievous youth ended in tragedy, but the more time and affection he invests in Lily and the boys, the more open and laughing he becomes.

And the boys! The three urchins could have been annoyingly cutesy plot moppets, but Goodman gives them character, distinct personalities and some truly hilarious dialogue. They do help move the plot along, but it comes about organically. They are not constantly underfoot doing randomly idiotic things in order to force the hero and heroine together. They are characters in their own right, with their own forms of agency who move and are moved by the decisions of others.

And through it all we have Jo Goodman's marvelous dialogue from her preternaturally articulate characters. I used to be irritated by the pacing, but I've grown accustomed to it and now appreciate the slow-burning tension and meticulously revealed secrets. Jo Goodman is also the absolute master of showing instead of telling, and her languid pacing allows her to paint a gorgeous, romantic picture without ever resorting to clunky and obvious exposition. That being said, if you like swift-paced reads, you might not be so enamoured with Jo Goodman's writing style.

As for me? I loved it. Another reason to keep Goodman on my Autobuy lists.
A+

You can purchase A Season To Be Sinful here!

Posted by AnimeJune at Saturday, September 08, 2012