"The World According to Garp," by John Irving 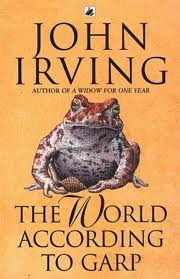 The Protagonist: T.S. Garp. Raised by an independent-thinking single mother, he wants to be a successful writer when he grows up.
His Angst: Well, he becomes a writer, and his works are published, but what is the nature of success? And how does his writing affect the rest of his life?

Jenny Fields: Garp's mother. An asexual with no comprehending of lust and no patience for social or sexual norms, she cuts her own unique path through life, child rearing, and writing - and becomes revered as a noted feminist because of it.


Helen Holm: Garp's wife. A talented English professor, she loves Garp, even as she sometimes wonders if she plays second place to fiction in Garp's heart.

John Wolf: Garp's publisher - respects his work, even as he sometimes has to play dirty tricks in order to sell it successfully.

Roberta Muldoon: Formerly a football player for the Philadelphia Eagles, this transgender woman tracks down Jenny Fields thanks to her feminist reputation and becomes one of Jenny and Garp's closest friends.

Ellen James: A young girl whose rape and disfigurement as a child sparked a controversial and fanatical feminist movement. A fan of Jenny Fields' work and Garp's writing, she wants to be a writer, too.

The Word: I'm sorry I've been away from the blog so long - I've been reading a book.

A very long and ultimately boring book. I picked this one up because it's the favourite book of a friend of mine, and the next choice for our book club.

Essentially, The World According to Garp is a bildungsroman - a coming-of-age story or fictional biography of a single protagonist (who, frequently, grows into an artist). David Copperfield by Charles Dickens is one. Jane Eyre might even be one, since the novel follows her through her abusive childhood and her years at school before she even meets her Mr. Rochester.

Bildungsromans are, I've found, large on character development and short on plot, but, as a linear recounting of a life, this is more or less expected. The story tends to be rambling and episodic, everything eventually leading to the character's success or death (or both!).

Now, if I love or relate to the protagonist of a bildungsroman, I love the novel (hence why David Copperfield and Jane Eyre are among my favourite books). If I don't love the protagonist, or if I'm apathetic - I don't.

Such is the case with The World According to Garp. The novel recounts the conception, birth, and life of T.S. Garp, the artistically-inclined son of an asexual feminist nurse who conceived him with the dying, lobotomized technical sergeant under her care. The novel follows Garp as he studies at the prestigious Steering School (where his mother is the nurse), takes up wrestling, travels to Austria, and explores and develops his desire to write and be a writer.

The novel does explore some fascinating general themes - I struggled through the periods detailing Garp's writer's block at the same time I was struggling with my own. I liked how his stories and novels all came with a powerful autobiographical influence, to the point where his wife, Helen, flat-out refuses to read any more of his novels because she can't bear to see how much of their life he's put into the pages. Reading up on John Irving on Wikipedia, this in itself seems to be pulled from Irving's own life and writing style, as several elements in his life appear in Garp and his other novels (for instance, like Garp, John Irving never met his own father, who died during World War II).

I also appreciated the exploration of feminism and gender roles, with all their advantages and disadvantages. Jenny Fields, Garp's mother, never identifies herself as a feminist until other women do after reading her autobiography, and the women's movement that rallies around her is as powerful and inspiring as it is narrow-minded and short sighted. Perhaps the scene that best indicates this is Jenny's eventual funeral, from which Garp is barred because it's women-only. Thus Garp has to dress in drag in order to infiltrate his own mother's memorial service, and the reactions to his unmasking reveal so many of the different approaches to feminism, both positive and negative.

As well, I loved how Garp essentially lives unselfconsciously as a househusband who cleans house, cooks meals, and raises his children while his wife Helen goes out everyday to work. This is never a source of angst for him, and believe me, Garp has many opportunities to angst in this enormously long book.

Finally, I adored the character of Roberta Muldoon, a transgender woman who used to play professional football for the Philadelphia Eagles and becomes Garp's closest friend. She embodies an essential conflict of gender - she identifies as female, even as she worries that some of her proclivities, impulses, and actions (particularly when it comes to using her impressive brute force to defend Garp and his friends on a number of occasions) are too male.

That being said, the writing style completely put me off. It's written in a very "telling" style, from an omniscient, future narrator. It reads like commentary, not description. As a result, I felt like I was hearing everything secondhand, like I was kept at a distance from the story while someone else made all the observations for me. Because of this, I never felt particularly invested in any of the events or characters, and by the 356th page, I just wanted the book to be done. Reading can truly be a tedious exercise when you don't particularly care about the characters or what happens to them.

I finished for the sake of Book Club (and to maintain my standing as the Only Member Who's Read Every Pick), but by the end of the novel, I was relieved. In a sense, The World According to Garp is very much like experiencing someone else's life - it's long, convoluted and detailed, and intermittently fascinating, but every interesting event is heavily couched in the tedious everyday minutia of living.
C
Posted by AnimeJune at Thursday, September 20, 2012