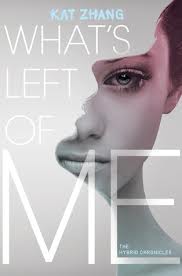 The Protagonist: Eva. In a world where people are born with two souls, she is the "recessive soul" who was supposed to fade away and leave her sister Addie, the "dominant soul," to live her life as a normal human being. She didn't, and she and Addie have been pretending to be only one person.
Her Angst: No one can know she exists, or else both she and Addie will be shipped off to parts unknown by their tyrannical government.


Addie: Eva's soul sistah and the one who can control their body. She'd rather fly under the radar and live a normal, unnoticed existence.

Hally/Lissa: Schoolmates of Addie/Eva who hide the fact that they're a hybrid - even though they long to find more people like themselves.

Kitty/Nina: Addie/Eva's roommates at the cruel psychiatric facility they're shipped to when their condition becomes public.

Dr. Lyanne: A doctor at the psychiatric clinic who sincerely believes she can help hybrids reintegrate into society.

Mr. Conivent: A nasty employee of the government who helps round up hybrid children and deliver them to the psychiatric clinic for testing and treatment.

Angst Checklist:
The Word: I was excited to start reading this book since I'd heard a lot of positive hype - and, to be fair, I read this book fairly quickly, eager to see what happened at the end.

That being said, I felt What's Left of Me was an example of a brilliant idea with faulty execution.

In an alternate universe, all human beings are born with two souls within their bodies. These two-souled beings were known as hybrids. However, the history our protagonists have been taught is that the nations ruled and populated by hybrids eventually descended into chaos and insanity, and only the Americas managed to free themselves from destruction during the American Revolution by eradicating hybrids from society and closing their borders.

In the Americas, everyone is still born with two souls, but usually by the time a child reaches the age of ten, one soul grows more dominant and the other one harmlessly and peacefully fades away, in a process called "settling." Those who do not settle by this age are taken in hand by the government and sent to shady psychiatric institutions where, more often than not, they are never seen again.

15-year-old Eva hides a secret - she is not supposed to exist. The "recessive soul" to her sister Addie (the "dominant soul"), she was supposed to fade away, and Addie/Eva's refusal to settle by the usual age ostracized and nearly bankrupted their family as they spent years in and out of hospitals trying to "cure" their affliction. For the good of their family (especially their declining brother Lyle who suffers from kidney disease), Addie and Eva have pretended to have settled for three years.

After three years of inactivity, Eva has lost all control over their shared body and is little more than a paralyzed ghost haunting Addie's mind, but she tells herself that it's better than not existing at all. That is, until they're approached by the new girl at school, Hally, who reveals she's secretly a hybrid (her sister soul is named Lissa) and that she can help them hide in plain sight and teach Eva how to move again.

Addie's afraid of jeopardizing their tenuously safe existence, but Eva is so hungry and desperate for the power to move, to live again that she insists. Addie finally consents and they spend more and more time with Hally/Lissa as well as their older hybrid brothers, Devon/Ryan. However, when disaster strikes and their condition is exposed, Addie and Eva are forced to learn the hard way just how "benevolent" their country's anti-hybrid society really is.

Let's start with the good, because there are a lot of interesting facets to this story. First of all, I loved the relationship between Addie and Eva, the push-and-pull, the power dynamic. As someone with sisters, I would seriously go batshit insane if I had to share a skull with one of them and never have any privacy ever, but the two-souls concept allowed for a fascinatingly new examination of sisterly relationships.

I loved how loving and fractured their relationship was - especially with the guilt Addie harbours over being the "dominant" soul who's capable of moving their body and being recognized in society and having a life while no one even acknowledges that her sister exists (not even their parents). I loved how Addie didn't have to set the plot going by visiting Hally/Lissa at their house. She controls their body, she could have ignored Eva's pleas and lived her life in peace and safety, but she didn't. That sacrifice adds so many layers and facets to their relationship. At the same time, I understood their frustration when they disagreed over how to act or move.

That being said, the rest of the novel is really frustrating - partly because some aspects of this novel are so good.

In regards to the central concept, the questions kept building up as I read the novel: what's supposed to be good about being a hybrid? What are the advantages? What can they do that one-souled people can't? Because even by the end of the novel it still sounded like having two souls is a major inconvenience compared to having only one. How do the two souls have lives? How do they choose postsecondary education if one wants to go into Arts and the other into Science? What happens when one soul falls in love with a man and the other soul falls in love with another man? And what about their partners' extra souls?!

And the worldbuilding for this type of society was just as frustratingly vague and nonsensical. For instance, why do parents even bother giving both souls names if they expect only one soul to make it? How do they even identify both souls in a newborn? Do they care when the recessive soul disappears? Do they mourn? Is there a social event, some sort of funeral for this sort of thing? If they don't care, why? How do they accept that one of their children will always be doomed to a premature death?

Again - these questions spring from the fact that Kat Zhang is working with a very original and fascinating story concept. There are so many directions to write about and explore with a concept like this, and I think that's where my dissatisfaction with this novel comes from. The novel has a brilliant idea - and it's put to use as mere window dressing to a standard dystopian adventure about a self-righteous teenager fighting The Evil Authority. Yup, the authority is just plain evil because it believes in the black-and-white "Hybridity is Bad" mindset - even though the story never gives a satisfactory explanation of how hybridity is good.

As for the novel's other features, the writing styles demonstrates some effort at writing lyrical prose, and while I sincerely appreciate that since I loooove lyrical writing styles, in some cases this results in cumbersome or confusing passages. For instance, there's a scene where Eva describes having a rubber stopper slammed into her windpipe - and for a few moments I kept reading to figure out who had attacked her like that, until I realized it was a poorly-integrated metaphor for her sudden silence.

That being said, What's Left of Me was still a quick read - part of that might have been my quest for answers, of which there were very, very few. I suspect many of the answers are being saved up for future books, a theory I deeply resent. I understand the need to save suspense and mystery for future novels, but a first book should still resolve and answer certain obstacles and problems, and I dislike first novels that explain nothing and leave open-ended conclusions in order to manipulate people into buying the next books.

Ultimately, though, my main beef with What's Left of Me is that it could been so much more, but it isn't.
C+
Disagree? You can purchase What's Left Of Me: A Hybrid Novel, here.