"The Mockingbirds," by Daisy Whitney 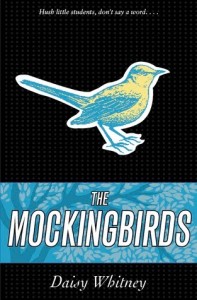 The Protagonist: Alex Patrick. When she wakes up in a stranger's dorm with no memory of what happened, she realizes she was too drunk to give consent.
Her Angst: Her school, Themis Academy, is infamous for being more focused on how their students appear decent than actually ensuring that they are, so who can she turn to for justice?

T.S.: Alex's best friend and roommate. Is Awesome. Stands up for Alex and insists she seek justice for what happened to her.

Casey: Alex's older sister, now in college. Also Awesome. She founded the Mockingbirds back when she was at Themis to help students that the faculty ignored.

Maia: Alex's other friend, and a fierce debater. Serves as Alex's student advocate in her Mockingbird trial against her attacker.

Amy: The current leader of the Mockingbirds.

The Word: I was clued into this book while reading a post over at Stacked about YA novels about rape and sexual assault. The premise of the Mockingbirds drew me - a girl who is date-raped at an elite prep school seeks restitution with the help of a Secret Society of Student Justice. It made me think of The Disreputable History of Frankie Landau-Banks. It made me think of Veronica Mars. Plus, with the Steubenville scandal still over our heads it seemed like a pretty relevant story.

However, it wound up being a bit of a let down.

Piano prodigy and high school sophomore Alex Patrick wakes up with a killer hangover in the dorm of a boy she doesn't know with no memory of what happened and two condom wrappers in the garbage bin. Sick and ashamed of herself for apparently acting like such a slut, she can barely bring herself to divulge the details to her best friend T.S. and her older sister Casey. Thankfully, T.S. and Casey are Smart Awesome Ladies who realize that Alex likely didn't consent to her impromptu deflowering - and Alex's slowly returning memories confirm this.

But what can she do? Discipline at her elite boarding school, Themis Academy, is a joke - no one's willing to jeopardize the school's reputation by even acknowledging that its students are capable of wrongdoing, and Alex refuses to go to the police or tell her parents. That's when Casey suggests that Alex go to the Mockingbirds.

Themis Academy's open secret, the Mockingbirds are the school's undercover law enforcers who punish the crimes that the faculty pretends don't happen. Unfortunately, what sounded like a bad-ass secret society of vengeful smart-alecks on paper is more boring in execution - the Mockingbirds are more like Law And Order: Teen Court. They serve papers. They determine court hearings. They have three separate but equal branches.

And you'll figure it all out as you read it, because all the Mockingbirds take an incredibly long time laying out their entire organization in meticulously dull detail. I realize vigilante justice isn't a healthy or admirable thing in the real world - but the Mockingbirds go to such extreme and unsolicited lengths to show Alex and the reader that they have checks and balances and regulations that all the excitement about the story quickly shrivels up and dies. The Mockingbirds spend more time explaining what they do than actually doing things.

And even with the Mockingbirds' excruciatingly detailed system, they harbour a lot of skewed perspectives on justice. For example, before she joined, one of the Mockingbirds was held down while a girl tried to carve the word "Queer" onto her back with a knife. She went to the Mockingbirds, who gave her attacker a trial that didn't actually result in anything since her attacker graduated days later. When asked why she didn't go to the cops, she said the trial had already made her point.

Except now a psychotic homophobic bigot with an Exacto knife went off to college consequence-free to harass and attack more people because her victim would rather "make a point" with a silly school-trial. Um, nice job?

And when it all comes down to it, the Mockingbirds really aren't that relevant to the story. The actual story is how Alex recovers from her rape and learns to enjoy music and boys again, and the Mockingbirds themselves have little to do with that. Their only real contributions to the story are a channel through which Alex can "press charges" against her rapist without her parents finding out, and some mild romantic conflict as one of the Mockingbirds, a science geek named Martin, develops feelings for Alex but technically isn't allowed to put the moves on her while her case is ongoing.

The novel shines when it focuses on Alex's trauma and recovery. Some people think of date-rape as "diet rape" or "not rape-rape," but Alex suffers immensely from her assault - she rearranges her whole schedule to avoid her rapist at school, and loses weight because she can't even sit in the same cafeteria with him. Her fears come to a head in a chillingly effective scene when she's forced to re-enact a rape scene from a play in class, a scene that also demonstrates the school's oblivious inability to discipline its students.

Ultimately, though, The Mockingbirds was a bit of a drag. Over-justified, over-explained, the Mockingbirds are little more than a distracting and tedious gimmick intruding on a genuine story of recovering from assault.
C+
Posted by AnimeJune at Sunday, April 28, 2013