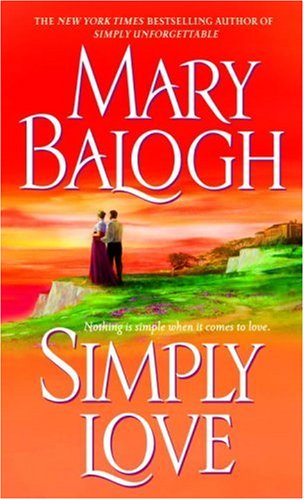 The Chick: Anne Jewell. A teacher at Miss Martin's School for Girls and mother of a young son, she enjoys her independence, even if she is a bit lonely.
The Rub: She bore a child out of a wedlock after her employer raped her, so she knows that not only will most of society reject her, but she's also terrified of intimacy.
Dream Casting: Georgia King.

The Dude: Sydnam Butler. The capable and dedicated steward of the Duke of Bewcastle's estate in Wales, and also a childhood friend of the Bedwyn family.
The Rub: Was horribly tortured and maimed in the war, and believes he's too ugly (inside and out) for any sort of romantic love.
Dream Casting: Rob James-Collier with an eye-patch.

Joshua Moore from Slightly Scandalous: Come to my house party!

Anne: Um, okay, I guess. So long as I'm treated like a servant because of my Dirty, Dirty Unwed Mother status. Oh hey, look, a cliff upon which I can Angst!

Joshua Moore: Hey guys, let me introduce my Super Awesome and Dear Friend Sydnam Whose Face Will Only Bother You If You're a Terrible, Terrible Person.

Sydnam: If only I wasn't horribly scarred and ugly!

Anne: If only I wasn't a Dirty Unwed Mother who's scared of sex!

Sydnam: Guess we better get married and solve all our internal problems before the book's over! Hey, look, I can paint just as awesomely with my left hand! Who knew?

Anne's Family: And even though we still kind of blame you for getting raped because it's the 19th century, we're sorry for dumping you and want you back!

The Word: I enjoy romance because I love reading about people who, after pages of struggle and toil, finally obtain their Happily Ever After.

However, once the HEA is over and done with, I'd just as soon watch the hero and heroine piss off.

Nothing annoys me more than a romance novel in which prequel couples continue to hang around like unwanted houseguests, drinking all the good beer and farting on the couch when I'd much rather be reading about the actual couple at the centre of the novel.

It's particularly egregious in Simply Love.

Every. Single. Bedwyn. from Mary Balogh's previous six-book series shows up in this novel with their blissfully satiated spouse and several sticky small children in tow to spout lame jokes, act like meddling matchmakers, and achieve no narrative purpose whatsoever.

But this isn't actually the Bedwyn Reunion Novel - no, this story ostensibly revolves around Anne Jewell (a secondary character from Slightly Scandalous) and Sydnam Butler (the younger brother of the hero from A Summer to Remember). Both Anne and Sydnam experienced terrible traumas as young adults that seemingly destroyed their bright futures.

As a young governess, Anne was raped by the son of her employer, and was subsequently fired when she discovered she was pregnant. Thanks to the protagonists of Slightly Scandalous, she and her son David were saved from destitution and she eventually obtained employment with Miss Martin's School for Girls.

The hero of Scandalous (Joshua Moore) continues to correspond with Anne and dote on David, partly because, as the cousin of Anne's rapist, he feels responsible for David and considers him family. Anne accepts Joshua's friendship, but his familial overtures make her extremely uncomfortable - she does not want to dwell on her rape or accept any sort of connection from it. However, when Joshua invites David and Anne to a house party held by the Duke of Bewcastle, Anne cannot refuse a chance for David to socialize with other boys his own age, even though she cringes at the thought of inflicting her Poor Unworthy Tainted Self upon the rarified Bedwyn company.

We met Sydnam back in A Summer to Remember - once a promising painter, he joined the war effort to prove himself to his two older brothers. When he was caught by the French during a covert operation, he endured weeks of hellish torture rather than reveal British secrets, and lost his right eye, his right arm, and a vast swath of skin on his right side as a result. He now works as a steward on one of the Duke of Bewcastle's estates in Wales and has adapted to his disabilities as well as his gruesome appearance.

He and Anne meet by chance when Anne sneaks out of the house in order to avoid having to dine with the All-Important Bedwyns (Anne is incredibly martyrish at the beginning of the novel - despite being personally invited, she'd prefer to be treated as a servant). Anne takes one look Sydnam's marred face and flees. Horribly ashamed of herself, she approaches him later at a dinner to make amends and the two wind up connecting over their shared loneliness.

And it's a nice enough story, and one I was particularly looking forward to since I knew both characters from previous Balogh novels. However, this time around - I was bored. Extremely bored. I know that Balogh favours thoughtful internal conflict over overdramatic external conflict - but her best novels still include a bit of both. I didn't feel there was enough of the latter in this story, at least in the first half. The first half is basically both characters a) moping about how their love is impossible and b) agreeing with each other about how nice the landscape is while c) all the Bedwyns giggle behind their hands, show off their innumerable children, and meddle in their affairs.

The second half picks up a little - after a disappointing one-night stand, Anne winds up pregnant and the two have to marry. Yes, the "I Forced Him/Her Into Marriage" angst is annoying, but we finally get some confrontation and drama as Anne deals with her fear of intimacy, Sydnam learns to enjoy painting again, and both of them confront their families (including the one that had turned its collective back on Anne) with their rather unorthodox marriage.

Among the things I enjoyed about this novel was Anne's relationship with her son David - despite her martyrish tendencies in welcoming company, she is fiercely protective of her son, to the point where she rejects Sydnam's and Joshua's well-intentioned offers to adopt him. David is her son and has her last name - she had to raise him all by herself and she refuses to let some dude take all the credit.

That being said, I felt there really was not enough basic story material for an entire novel here. There was just such an awful amount of filler - there are too many landscape scenes to count, and every previous Balogh protagonist who shows up just has to recount the entire back cover blurb of their own novel, and Anne and Sydnam dither around with lot of woo-woo conversations about the mystical sacred beauty of Welsh nature. And those Very Real Problems the protagonists have? They're solved remarkably quickly. Maybe there would have been more time to develop them if the Bedwyns had all decided to go to Disneyland instead.

Simply Love might have worked as a novella, but as a novel, it felt bloated and watered-down.
C+
Posted by AnimeJune at Thursday, May 02, 2013