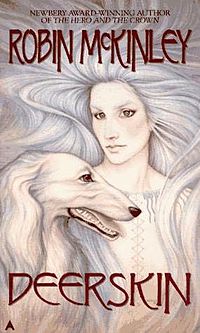 The Protagonist: Princess Lissla Lissar. The only child of the most beautiful Queen and most handsome King in the world, she has a lot to live up to - even though she's forced to live in the shadow of their greatness.
Her Angst: After her mother dies, her evil and grief-maddened father demands her hand in marriage. When she refuses, he attacks her and nearly destroys her.

The King: A disgusting and vile man who takes his dead wife's promise to only marry an equally beautiful woman to monstrously literal lengths.

Ash: Lissar's protective and loyal fleethound who follows her into the wild after her father's assault.

Viaka: Lissar's one true friend while living under her father's roof.

The Moonwoman: The Goddess of the Moon who comes to Lissar's aid, and trains her to be her emissary on Earth.

Lilac: A stable worker who befriends Lissar when she comes to the yellow city.

Prince Ossin: The heir to the Sixth kingdom who would rather work in his kennels with his beloved dogs than dance attendance on princesses at balls.

Word: People warned me about this book when I picked it up secondhand. I, myself, wasn't sure what to make of it, especially after my lacklustre reaction to McKinley's Beauty. Deerskin is about a million times better than Beauty - and also a million times darker.

Deerskin is intended as a retelling of "Donkeyskin" - a Cinderella-esque tale where a fair maiden runs away from a cruel parent and dons an ugly disguise until she wins the heart of a Prince thanks to a ball and a trio of magical dresses. Deerskin, however, takes it in a decidedly darker direction that casts a shadow over traditional depictions of fairytale morality - especially the idea of beauty.

The first part of this novel revels in mounting dread. In a wealthy kingdom, the most handsome King in the world wins the hand of the most beautiful woman in the world. In ordinary fairytales, this would be cause for celebration. In Deerskin, McKinley aptly depicts how their combined beauty does not inspire love in others, but obsession. Their adoring citizens are so fascinated by their beauty and their grandeur that they are blinded to all else, and the King and Queen are just as obsessed with themselves, if not more so.

As a result, the King and Queen's daughter, Lissar, is perpetually overlooked and ignored - when she isn't being forcefed stories of her parents' greatness by their worshipful servants. Then her mother takes ill and dies - but not without an attempt to extend the influence of her beauty from beyond the grave. The dying Queen extracts a promise from her husband that he'll only marry again if he finds a woman as beautiful as she was.

Not long after her mother's death, Lissar notes a change in her father's behaviour towards her - a profoundly disturbing change. However, she is alone in this - her father's subjects are so focused on his magnificence, on his return to his old glorious self from the madness of his grief, that no one pays any attention to Lissar and her growing terror at her father's newfound fascination with her, especially as she starts to look more like her mother with every passing day.

The dread, the disgust, and the dramatic irony build chapter by chapter as Lissar's world closes in around her - until at last her father's sanity breaks and reveals the scalding, hideous ugliness beneath the perfect facade.

What happens to Lissar is monstrous and awful and written in a deeply traumatic fashion. I've heard from several readers who've refused to read this book because of what happens, or who've read it and refuse to read it ever again - even people who love it, even as they admit it's too painful to reread.

The rest of the novel concerns Lissar's escape and recovery - every painstaking, lyrically-written detail. With her identity and her memory shattered by her experience, she essentially has to rebuild herself as a person from the ground up, and this makes for a fascinating, detailed read. Yes, this novel is extremely dark and slowly-paced. Lissar's healing process takes up two-thirds of the book and even by the novel's end, although she achieves a form of triumph, she still lives in pain.

So why read Deerskin? Why bother with it when it's all about doom and gloom and pain? Well, as someone who loves fairy tales, I adored how McKinley expertly picks apart the common truths and tropes of fairytales and turns them over to show their sinister implications.

In Deerskin, however, the subjects' fanatical adoration for their beautiful King and Queen is empty and shallow, because they are more concerned with the appearance of goodness than the performance of goodness. Lissar sees her own beautiful appearance as a curse - not only because it attracts her father's unwanted attention, but because it impedes the development of her own identity separate from her mother's. When the King declares his intention to marry his own daughter, the subjects blame Lissar, because they cannot allow their perception of the King's perfection to be tarnished.

This is contrasted with the depiction of the Sixth kingdom - the place to which Lissar flees. Lissar's own people sneer at the Sixth kingdom's impoverished, common, countrified ways. They are an ugly, small, backwater kingdom with an ugly, fat, backwater heir named Prince Ossin.

McKinley takes this man and makes of him a Prince Charming in the truest sense of the word - for he is very charming, and very wonderful, in a very un-fairy-tale way. Again, he is not a handsome man - he's overweight, beady-eyed, and rather smelly from spending all day in the kennels with his dogs. He's not even a particularly good prince - he'd much rather go hunting and train pups than handle matters of state. Moreover, he is often perceived by others to be a bad prince because of his looks, his clumsiness, and his political disinterest.

And yet, with his actions around Lissar, who comes to work in his kennels, he demonstrates that he is a good man. He does not rescue Lissar. He does not go to battle for Lissar. He does not kiss her and turn her from an emotionally-traumatized toad into a fully-functional, well-adjusted princess. He is simply there, present and open and practical and honest and overwhelmingly generous with his kindness. These two grow attached the more time they spend together, and the more they share in each other. There is no winning or possessing or rescuing involved.

McKinley creates a gorgeously-written fairytale from the plot lines that fairytales traditionally reject. Despite its slow build and its gruesome subject matter, I would recommend this as an intense and wholly original reading experience.
A-
Posted by AnimeJune at Monday, August 12, 2013