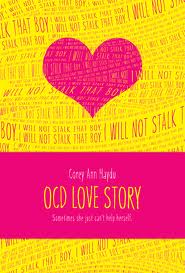 The Protagonist: Bea. After a particularly bad break-up, she's been seeing Dr. Pat for therapy. When her therapist asks her to join a group therapy session for teenagers with Obsessive Compulsive Disorder, she's certain Dr. Pat has made a mistake. She not that crazy.
Her Angst: She starts falling for a fellow therapy mate named Beck - he has some pretty serious compulsions, too, but she doesn't mind. But what will happen if he starts getting better as she starts getting worse?

Lisha: Bea's best friend from grade school. Remarkably tolerant and okay with Bea's odd little quirks - but as they start getting worse, how long will she stick around?

Dr. Pat: Bea's therapist. Bea alternately wants to please her and resents her for trying to fix problems that don't seem all that important to Bea.

Beck: A boy with ongoing OCD whom Bea meets when he has a panic attack at a school dance. He's big and strong - but he has his own issues.

Austin: A self-absorbed indie rocker who attends couples therapy before Bea. Bea becomes fascinated with his style, his rock star life, his devil-may-care attitude - and then convinced that she has to keep observing him if she wants to keep him safe.

Sylvia: Austin's unhappy wife. Bea wishes she had her life, even as it appears that Sylvia's not as satisfied with it as Bea is.


The Word: I'm going to have to get a little personal about this review.

OCD Love Story scared the shit out of me. In a good way. In just the way I needed to be scared.

I've been dealing with some fears of my own. I've let some worries and anxieties get the better of me lately, and after an incident in New York City while I was attending Book Expo America, I realized that I wasn't dealing with them in a way that was rational. Instead, I was making my own life smaller. Part of me hoped I could just ignore it and keep myself in a safe space and it would disappear on its own. I didn't want to go to therapy. Crazy people need therapy. Therapy is expensive. Sometimes therapy doesn't work.

I'm not going to say that OCD Love Story was the One Big Motivating factor that got me to make moves towards getting help and solving the problem, because that's not true. That honour goes to my family, especially my mother. But this novel's amazingly detailed portrayal of its heroine gave me an astonishing amount of insight into my own problems that helped me better understand why I needed help, and why going out and getting it while it's still relatively minor is better than waiting until it grows bigger and sucks all the enjoyment out of life.

Our heroine Bea believes her problems are pretty minor. Almost too minor for therapy sessions with Dr. Pat, which she's attended since a particularly bad break-up with a football player. Definitely too minor for the group therapy that Dr. Pat recommends - one participant's plucked her head nearly bald, and another's scratched up his face thanks to his compulsions. Bea doesn't understand why Dr. Pat wants her to share her life with a bunch of kids who are clearly way crazier than she is.

Bea's just a little bit cautious. She's a nervous driver. She collects and scrapbooks articles about accidents and murders for Current Events class. She likes to take notes about the interesting people she meets - particularly Austin and Sylvia, the two gorgeous, ultra-fabulous people who see Dr. Pat for couples therapy right before Bea's sessions. So she's a bit quirky. It doesn't mean she's totally nuts. It doesn't mean she actually has Obsessive Compulsive Disorder.

However, she does develop a crush on Beck, another participant in her group therapy sessions. Like her, he seems to rest closer to the "normal" side of the spectrum. He gets a little too intense about his gym work outs. His parents are concerned about how much he washes his hands. Sometimes, to calm himself, he'll tap his foot in groups of eight. But he's super cute and he likes Bea, too. Their separate weirdnesses somehow fit together.

However, the more you get to know Bea and learn about her life, the more you learn how deep her issues are, and how worse her issues get the longer she refuses to address them. It's fascinating how a small, relatively harmless quirk evolves into a compulsion. For example, Bea starts taking notes about Austin and Sylvia because they're interesting and she can overhear their sessions in the waiting room. Soon, she's driving by their house and taking notes about them every day, and the more she does it, the more she convinces herself that if she doesn't do it, something terrible might happen to them. She's not stalking them. She's just looking out for their safety.

Bea, as a character, resonated extremely powerfully with me. She has wishes and desires and is so frank and honest about herself - even as she descends deeper into her compulsions, she knows she's doing it, she knows it's irrational, and yet at same time she can't help herself. Her developing relationship with Beck is equally fascinating - she's actually comforted by his compulsions, to the point where she starts resenting him when he shows signs of improving, of "leaving her behind."

Bea gives us a sympathetic and detailed view into OCD - like how a lot of compulsions are simply ways sufferers convince themselves they are controlling the things they are afraid of, when they are afraid of things that ultimately cannot be controlled. Things like death, random acts of violence, or natural disasters. Bea's read so many articles about seemingly-harmless people who suddenly snapped and hurt someone, that she can't stand to touch sharp objects around people she cares about. She wouldn't really hurt them. She's just being careful. Just in case.

It's frightening to identify so personally with a fictional character with similar issues, to realize that a complete stranger who's never met you has constructed this pointing hand out of paper and ink that reaches out and pokes you right in the chest. Hey, you! Yes, you! I see you!

I'm not going to go into too much detail about my own personal situation (although I almost did - this review was initially nine paragraphs longer, you're welcome!), just enough to say that this novel invoked an extremely personal and positive reaction in me, and helped me look at my situation with a measure of hope. This book is powerful and poignant and funny. Bea has a problem, but her life isn't All Problem. She's a person - who happens to want to be a fashion designer. Who likes drinking stolen wine with her best friend while watching dumb reality shows. Who likes and eventually loves Beck because of, in spite of, as well as, on top of his compulsions.

And isn't this what literature is supposed to do? Inform readers about how different people live, and also inform those different people that they are not as alone, nor as abnormal, nor as incurable, nor as weak as they thought?
A+
Posted by AnimeJune at Saturday, August 03, 2013