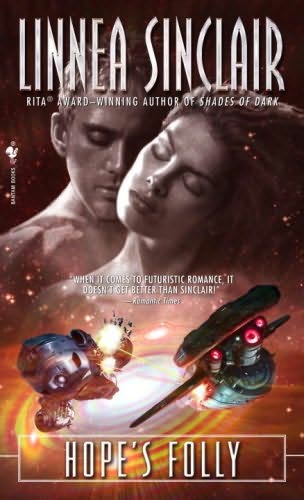 The Chick: Rya Bennton. A security officer aboard the Hope's Folly,  she's determined to protect its Admiral - Phillip Guthrie - from all threats - including a possible traitor on board.
The Rub: She's also idolized Phillip since she was nine years old, which makes objective thinking rather difficult.
Dream Casting: Christina Hendricks.

The Dude: Admiral Phillip Guthrie. In order to help the Alliance against the evil Empire, he has to transport an outdated, malfunctioning ship to a safe haven.
The Rub: He quickly falls for Rya, but he's worried that the age difference and the fact that she's his best friend's daughter will get in the way.
Dream Casting: George Clooney.


The Word: I am a fan of detailed settings, where the environment comes to life because the author has clearly done her research. Unfortunately, with Linnea Sinclair, I've found you can have too much of a good thing.

While I read and enjoyed Games of Command by Sinclair, I was bored to tears by The Down Home Zombie Blues. The endless deluge of technobabble left me feeling lost and distanced me from the story and the emotional relationship.

I had the exact same reaction to Hope's Folly. I made it about 240 pages in before I had to start to skim. Phillip Guthrie is an Admiral of the Alliance - the band of space rebels who hope to overthrow the evil intergalactic Empire run by the dictatorial Tage. Unfortunately, the Alliance is short on pretty much everything - ships, guns, crew members - so Guthrie winds up with an outdated bucket of a starship, a dedicated but depleted skeleton crew, and orders to transport the ship to the protected dockyards of Ferrin.

One of Guthrie's crew members is Rya Bennton, a talented weapons expert whose father was killed in one of Tage's purges. While part of her hopes to avenge her father's death, another part of her is just happy to be working under Phillip Guthrie - her childhood hero and one of her father's best friends. She is ridiculously in love with Phillip, and has no idea that he soon comes to return her feelings. Unfortunately, there's a pesky 16-year age difference, the fact that Rya is Guthrie's inferior, and the problem of two separate space villains and a space traitor who want to either kill or capture Guthrie before he makes it to Ferrin.

Linnea Sinclair is an absolute master worldbuilder, and if you love and are experienced with military science fiction you will probably love this novel to pieces. If you are, um, more of a novice when it comes to sci-fi, this book may very well bore or confuse you.

Jargon. There's a lot of it, along with endless descriptions of military procedure, the ship's design, the different decks, the training of various crew members, and the technology used to control every little appliance on the ship. It's not enough for Phillip to give an order - the author also has to explain what his order means, his history with the crewmember he ordered, the science behind the technology ordered, and the various parts of the ship that the crewmember will pass or deal with in his quest to fulfil the order.

Frankly, I'm not sure how many of these details are ever relevant, and it's rarely entertaining. After two hundred pages muddling through confusing names and details, I only had the barest sketches of who the protagonists were. Guthrie is Old, has a Bum Leg, and is Stressed All the Time. Rya Thinks She's Fat, loves Fondling Guns, and thinks Guthrie is Hot Stuff. I never felt the story let me dig any deeper than that - there were too many details and schematics and technobabble sucking up air that would be better spent on the romance, which moves at an absolute snail's pace.

After about two hundred pages of determined reading, I realized that it was difficult to pick up where I left off because all the technobabble basically read the same to me, and that's when I realized I needed to back away. I skimmed to the end, but nothing really interesting happened.

I would hesitate to call this a bad novel or even a poorly-written one. It is extremely heavy in technobabble, but if you're familiar with science fiction this may very well not bother you as much as it did me. Bear in mind though, if you're not familiar with science fiction, this may not be the book to start with. Or end with. I'm not sure I'll be trying Linnea Sinclair again.
DNF
Posted by AnimeJune at Wednesday, August 28, 2013