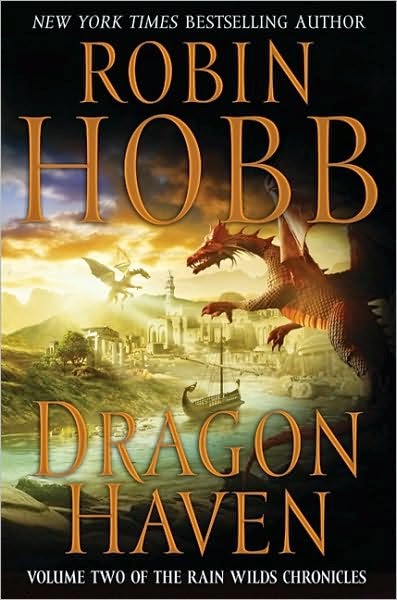 Thymara: While most of the other keepers seem to have bonded with their dragons, hers remains frustratingly arrogant and aloof. Will she ever be able to win her over?

Alise: The pampered dragon scholar starts to get her hands dirty, and finds herself enjoying her life far more than expected.

Leftrin:  This riverboat captain is still in love with Alise - but she's married, and he's got secrets he still needs to keep under wraps.

Sedric: When he drinks dragon blood and becomes bonded to the weakest and slowest-witted of the dragons, he can no longer remain the uninvested, ignorant city boy any longer.

Greft: The self-styled leader of the keepers whose revolutionary ideas have more to do with grabbing power for himself than improving the lives of his dragons and fellow keepers.

Sintara: A beautiful blue dragon, she refuses to bond emotionally with her keeper. Humans are weak pathetic creatures! What are they good for, anyway?

Carson: A hired hunter who tries to help Sedric adjust to the new changes in his circumstances.

Jess: Another hunter, this one with far murkier intentions towards the dragons.

The Word: You know what's the most powerful feeling I experienced reading this novel? Relief.

I was highly disappointed with the first novel in this trilogy (Dragon Keeper) for more than a few reasons - the gratuitous fan service, the endless repetition of magical concepts from the first Liveship Traders trilogy, and the disturbing characterization of the first two explicitly gay major characters I've encountered in a Robin Hobb novel (not counting the gender-bending Fool from the Farseer books and the random lesbian spear-carrier who appears a handful of times in The Liveship books).

THANKFULLY, none of these issues carried over into this second, highly entertaining, and thought-provoking novel. Seriously - this book fixes all the problems I had with Dragon Keeper. Firstly, no fan service from previous characters - the protagonists are all on their own as they navigate the treacherous Rain Wilds territory to locate the lost Elderling city of Kelsingra. Unbeknownst to them, there is a traitor in their midst who has been hired to harvest dragon parts for the dying ruler of Chalced, who superstitiously believes in their magical curative properties.

There are no more tedious explanations of sea serpents and their cocoons here, either - instead, the story focuses on how, miraculously, the dragons previously dismissed as crippled or mentally deficient are starting to grow and change and improve thanks to their bonds with their human keepers. While several dragons (like the glorious blue dragon Sintara) still try to enforce the idea that dragons are The Rulers of the Earth and don't need humans - it becomes increasingly apparent that maybe bonding with humans is an integral part of the dragon maturation process.

In the last book, I'll be honest, I had serious problems with how the LGBT characters were portrayed. Sedric and his secret lover Hest (Alise's husband) came across as horrific gay stereotypes - Hest was the raging, closeted, misogynist bully who continually criticizes Alise's fashion choices; and Sedric was a mincing fop who spends most of the first novel moaning about getting river mud on his beautiful silk shirts.

However, in this second book, we get a far deeper look into Sedric's motivations. Yes, he's still kind of a spoiled city boy but now it's backed up with actual characterization that goes beyond "Alise's Token Gay Best Friend." When he accidentally-on-purpose drinks dragon blood, he develops a bond with the underdeveloped copper dragon Relpha. Having an innocent creature come to love and depend on him (and being able to psychically feel that trust) forces Sedric to reevaluate his relationship with Hest. Robin Hobb is an expert at introducing insufferable characters only to slowly evolve them over time (see: Malta from the Liveship Trader books).

As well, surprise surprise, we gain three (!) more LGBT characters in the novel who are all distinct, positive characters.

And finally, Dragon Haven also explores themes of sexuality - female sexuality and the rules governing it, to be specific. Thymara, one of the dragon keepers who has been marked with scales since birth, has been told her entire life that sex is forbidden for people like her. She has followed these rules faithfully, and is shocked to discover the other marked keepers have abandoned these rules and have started exploring their sexuality as a rejection of the Rain Wild culture that treated them like despised outcasts.

Thymara can be quite a judgemental character (there is a fair amount of slut-shaming on her part, initially), but her character arc is intriguing. The Rain Wild rules may be prejudicial, barbaric and unfair (breeding amongst the scaled is mainly forbidden because deformed babies are considered a waste of precious resources), but mindlessly defying these conventions without considering the real-world consequences of one's actions is not an appropriate response. Thymara remains celibate (and earns mockery for it), but her motivations for this choice evolve as the book does, becoming a choice based on agency and her ambitions for her future, rather than an unquestioning, meek acceptance of a biased system.

I am really, really glad this book didn't suck. It did the opposite of sucking, actually. It's pretty awesome, actually. Great female characters, complex themes, DRAGONS, and a dash of romance. What more could you ask of Robin Hobb?
A+
Posted by AnimeJune at Thursday, June 26, 2014