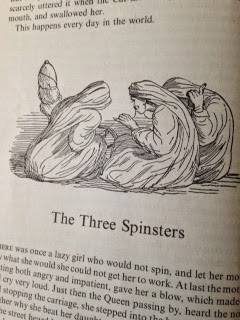 So there's this girl, right? This girl is so freakishly lazy that one day, her mother completely loses her shit and beats her so viciously that the Queen, passing by in a carriage, hears her screaming from several dozen feet away.

The embarrassed mother lies and tells the Queen that her daughter is addicted to spinning, to the point where her mother can't provide enough flax.

"OMG, calm down," says the Queen, who is also a closet spinning enthusiast. "I have plenty of flax in my castle, your daughter can come and live with me."

The Queen takes the girl to her castle and shows her three rooms full of flax. She tells the girl that if she spins all the flax in these rooms, she'll get to marry the Crown Prince, because being a hard worker is a helluva lot more useful than being able to sleep for a hundred years or run really fast wearing only one shoe. You go, Queen!

The three women look up, learn the girl's predicament, and offer a trade: they'll spin the flax into yarn for her, and in return she'll invite them to her wedding and treat them like royalty. The girl agrees, the three women spin all three rooms in no time flat, and before you know it, the girl's getting married to a prince who is absolutely in love with how ambitious and take-charge and competent his wife is.

The girl does not forget the three spinsters, though, and invites them up to the royal table just as she promised. The prince, less than thrilled with their weird deformities, asks how they got such big feet, lips, thumbs, etc. The spinsters reveal their unique appendages are Darwinian adaptations to spinning, and the prince is so freaked out by it that he promises he'll never make his wife work again - because being industrious and self-motivated and goal-oriented is all well and good - but not if it makes you ugly.


Points Added For:
Points Deducted for:
And the moral of the story is: with the right friends, you'll never have to work again!

Rating: Eight freakishly-big thumbs out of ten.
Posted by AnimeJune at Thursday, June 26, 2014