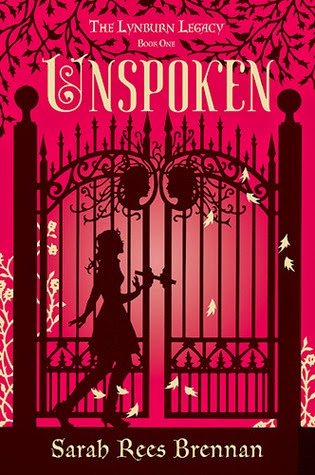 The Protagonist: Kami Glass. An investigative report-in-training, she's always looking for the next big story to blow wide open, in her small English town.
Her Angst: The return of the infamous Lynburn family looks like the perfect scoop - until she learns she has a secret bond with Jared, the Lynburn black sheep.

Angela: Kami's ornery BFF who's happy to help with Kami's adventures, so long as they doesn't involve Annoying People or interfere with her naps.

Jared: The "voice" who has conversed with Kami in her head for the better part of her life. The good news? He's real and so are his abs! The bad news - he's real, and knows all of her innermost secrets.

Ash: The cute and helpful son of Lillian Lynburn. Jared's cousin. Genuinely likes Kami, and worries about her connection to his "dangerous" cousin.

Lillian: Rosalind's icy sister and Ash's mother. Less awful to Jared, but not exactly welcoming, either.

Uncle Rob: Lillian's husband and Ash's dad. The only member of the Lynburn family who's openly loving to Jared.


The Word: Kami Glass has lived her whole life in Sorry-in-the-Vale, a bucolic little English village with roots going back hundreds of years. Despite being born there, she's always been a little bit of an outcast - partly because of her Asian heritage and partly because she regularly holds conversations in her head with an imaginary boy named Jared.

Now hear me out.

More than anything, Kami wants to be an investigative journalist, and sussing out the town's myriad secrets is her life's ambition. She thinks she's hit the jackpot when she learns the town's founding family, the Lynburns (two surviving sisters, a cousin, and their respective sons Jared and Ash) have returned to Sorry-in-the-Vale after a long absence in America. They're rich and live in a mansion. Everyone in town lives in fear of them, but refuses to explain why. And the two Lynburn boys are ridiculously hot, angsty, and mysterious. Kami can't wait to interview them and find out what all the fuss is about.

Hear me out! Just give me a minute!

When Kami runs into angry, mistreated Jared Lynburn, she discovers that he's the boy she's secretly conversed with her entire conscious life. Her imaginary boy is real, and neither knows what to do about their psychic connection, or what it means with regards to the Lynburns' dark history with Sorry-in-the-Vale.

Okay, now, I can see you side-eying this review already. Instant bonds, a Love Triangle with Angsty Angry Loner Boys, a quirky heroine too nosy for her own good. The perfect ingredients for One Hot-Ass Mess of a Book.

Except this book is actually kind of ... good? Amazingly good, even. One of the best things I've read this year, if you want to be specific. Yes, Unspoken trades on a lot of popular YA tropes that have been beaten into glue by previous and less-skilled authors, but Unspoken does it in an incredibly intelligent and self-aware way.

Kami does have an instant bond with Jared, but it's not a source of fuzzy duckling feelings that eschew reality. Rather, their connection is embarrassing and unpleasant and awkward. It's one thing to believe in a "real" imaginary friend - it's an entirely different thing to discover you've placed the quotation marks on the wrong word and you have very little privacy or independence for your own thoughts. Their bond is a source of (rather than a cheap solution to) conflict.

The story is not all about the guys, either. I mean, they're important - the Lyburn boys do live in a decrepit, thunderstorm-prone mansion drenched in sssssecretssss - but the novel spends just as much time with Kami and her friends Angela and Holly. One of the more interesting subplots involves Kami re-thinking her dismissive opinion of Holly as a boy-crazy flirt - thanks, in part, to Jared calling her on her close-mindedness.

Kami is such a dynamic character. I loved her. She's confident and take charge, and refuses to lower her expectations for anyone else. I loved her righteous search for the truth - even as she learns that some truths are ugly and painful and can erode her trust in the social structures in which she's lived her whole life. Even then, she never gives up her trust in herself. Take her bond with Jared - she's fine with using it for their friendship, but it makes the prospect of a romantic relationship deeply uncomfortable to her and she refuses to give in to Jared's pressuring. Yes, she genuinely likes and trusts Jared, but she respects herself enough to set boundaries and stick by them.

In fact, Kami's strength and confidence are the reason Jared doesn't look like a complete asshole in comparison. He's a very angry, broody, demanding character with more than just a few crazy wives locked up in his attic (metaphorically speaking!). He had an extremely lonely and painful childhood thanks to an abusive father and a selfishly uninterested mother, and even his aunt and cousin don't treat him much better.

His bond with Kami is pretty much the only positive relationship in his entire life and it's entirely understandable, from a character development standpoint, why he wants to hold onto it and develop it. But he's very aggressive about the bond, and constantly pressures Kami to deepen it. If Kami had been one of those submissive, doormat characters who treat the hero's Sad Past as a free pass to be an ass (hey, I rhymed!), Jared could have been a horrific character. However, Kami is constantly fighting back with her own strength and forcing Jared to back down and rethink himself, and because of this equal balance, I was able to enjoy and understand Jared more. And even so, I felt his angry tantrums got a little repetitive towards the end.

All of these elements, brewed together, creates a delicious, seething cauldron of Gothic mystery that keeps the reader guessing. Something is definitely amiss with the Lynburns and their connection to the town. However, as Kami discovers, her town is is plenty amiss all on its own. With developed female characters, a great mystery, lots of small-town secrets, and swift pacing, Unspoken is a fantastic addition to my YA bookshelf.
A
Posted by AnimeJune at Sunday, June 22, 2014

Labels: A Reviews, Fantasy, YA