"The Naturals," by Jennifer Lynn Barnes 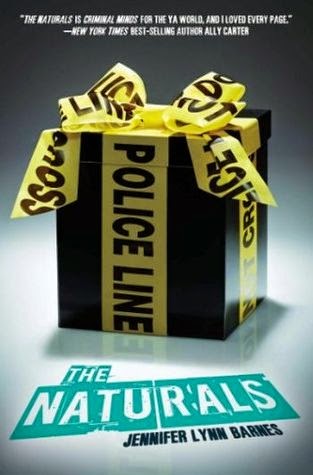 The Protagonist: Cassie Hobbes. A teenage girl with an astounding ability to profile people who is recruited by the FBI to help solve cold cases.

Her Angst: Her mother was murdered and the killer was never found - could the FBI help her find out who did it?

Dean: A brooding loner who, like Cassie, is an expert profiler.

Agent Locke: One of the FBI agents who helps train the Naturals in reinterpreting evidence.

Agent Briggs: The head of the Naturals Program.

The Word: Cassie has a gift. Thanks to her mother's training, she can look at people, assess their details, and successfully determine their backgrounds and guess their future decisions. Cassie also has a curse. Her mother - who travelled the country using her profiling skills to pose as a psychic - was brutally murdered by an unknown assailant when Cassie was twelve, and she's never truly gotten over it.

Now seventeen, Cassie's approached by a mysterious boy who leaves a business card from the FBI. The FBI has started an experimental program that involves recruiting teenagers with raw, miraculous crime-solving gifts (dubbed Naturals) to help solve cold cases. A human lie detector and an emotion reader count among their recent recruits. Cassie agrees to join the program - partly to help people, but also to look for a chance to use FBI resources to find her mother's killer.

As Cassie starts practicing her abilities and getting to know the deeply weird, deeply troubled fellow Naturals in the program, a mysterious serial killer with ties to Cassie's past starts stalking prey closer and closer to the Naturals' home base, making it difficult for Cassie and her pals to stay uninvolved.

I was hooked on The Naturals from beginning to end. It has an original and highly interesting concept (teenagers hired by the FBI to solve cold cases) that's backed up with a well-developed setting, entertaining background details, and razor-sharp pacing. The nature of the "Naturals" (teenagers with preternatural detection skills) also provides oodles of angst and dark pasts to go around. None of these teenagers developed their abilities in the happiest of environments, but it is incredibly fun to watch how Cassie and Dean determine a stranger's personality just by looking at her parked car.

That being said, the author doesn't spend time developing all these characters equally. Cassie is a wonderful and unusual protagonist. Despite being taken in by her father's loud and affectionate clan, she has trouble connecting to people, always feeling one step removed from the ability to return the love they lavish on her. She worries that she's too broken by her tragedy to love anyone back. Michael and Dean, the two other points of the novel's standard-issue Love Triangle, also get some backstories, but the other members of the team don't get much more than an introduction and a few scenes to air out their unique quirks. But there's every chance we'll get to learn more in the sequel.

There's also some pretty graphic violence - and sadly, it's all directed against women. Women are constantly victimized in this book. And while I realize that it's common enough in serial killer narratives to be a cliche, I wish the author had tried something different. Finally, while the big reveal is a nice surprise, it doesn't really hold up when put to severe questioning.

All told, however, The Naturals is a whip-smart, incredibly fun and original YA mystery.
A
Posted by AnimeJune at Saturday, August 16, 2014