"And Then He Kissed Her," by Laura Lee Guhrke 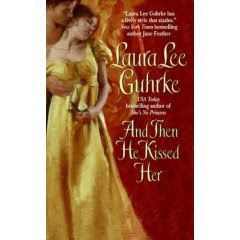 The Chick: Emma Dove, a thirty-year-old girl-bachelor who's spent five years as the incredibly efficient, meticulously proper, and woefully under appreciated secretary to wealthy publisher Viscount Marlowe. She makes his publishing company run smoother, buys send-off gifts for his mistresses, and can do just about anything...except get Marlowe to publish her manuscripts on etiquette.
The Rub: Her upbringing (by her cold father, and then later her affectionate, if rigid, aunt) has since been so strict that she has emerged with flawless manners and an encyclopedic memory for the rules of proper conduct ... as well as a life of dull spinsterhood living alone with her cat.

The Dude: Viscount Harrison "Harry" Marlowe - one of the only members of the Peerage not in debt, because he happens to be the owner of a successful publishing company. He has instincts for what sells and what doesn't, and cannot imagine what his dull, sober secretary could possibly write that could sell.
The Rub: He and his family have been in disgrace ever since he spent five years petitioning Parliament to divorce his adulterous wife who ran off to America with her lover. Since that betrayal, he has no intention of marrying again.

The Plot:
Marlowe: Let's see - Miss Dove, did you send the diamonds to my ex-mistress? The sapphires to my sister? The printing list to my editors?

Emma: Yes. Did you read my manuscript?

Marlowe: Er, not for us, feel free to try other markets! -- *flees*

Emma: *WORST BIRTHDAY EVER* I quit!

Emma: And you're selfish, careless, and a liar! Plus, it turns out ladies actually LIKE reading my stuff so now I'm insanely successful!

Marlowe: Hurrah! Ah well, might as well get married, too.

One Persnickety Aunt who Influences from Beyond the Grave

One Gift of Naughty Books


The Word: There are a few plot elements that aren't my favourite but that I've come to see as the norm in some forms of Regency romance. That is, while they occur so often in romance that I don't automatically mark a book as bad if it has these elements, in novels where they don't occur it's a pleasant surprise.

One is the Love At First Sight plot. You know, the Hero is gazing dispassionately across a crowded ballroom and spots the Heroine and is immediately struck by Catastrophic Upheavals of Unheard-of Emotions. They've happened enough in books where if the book is still well-written and entertaining, I'll still enjoy it, even if I tend to think it's a little unrealistic. What can you discern about a person in one glance other than looks? You can't tell if a person is funny or charming or sensitive or generous just by looking a person for two seconds. Which leads into my second not-favourite plot element:

The Pretty Heroine Meets the Pretty Hero plot. There are an awful lot of these, especially in Regency, where the Heroine is just gorgeously, unbelievably beautiful, as is the hero. I know that everyone is beautiful in their own way, but I've read so many stories about the supermodel gorgeous girl falling for the supermodel gorgeous guy to have supermodel gorgeous babies. I don't understand the relevance of good looks. WHY does the heroine have to be beautiful? WHY does the hero have to be handsome? Beautiful and Handsome do not necessarily equal Attractive. I mean, look at Jane Eyre - she's plain, he's boney-faced (and eventually maimed). They can still get it on. It happens so often that it doesn't really bother me - but it does mean that when a book doesn't use these, that it gets a little extra positive attention from me.

Case in point: And Then He Kissed Her. Marlowe has known Emma for years. For years, he's walked past her desk and she's typed his memos with brisk, humourless efficiency. In return, he paid her a man's salary and that was that. She was an employee. He simply never saw her in a sexual way. And she's not exceptional-looking, either. She's skinny, she has tiny boobs (that are hilariously dissed by one of Marlowe's busty ex-mistresses), she's plain and freckled. Besides which, Marlowe has become somewhat notorious (even amongst his family members) for preferring exotic-looking, curvaceous and, let's face it, slutty women as his sexual partners and Emma is so far out of his preferred category that even his family never suspected Marlowe or Emma to be having an affair (as many other members of the ton did, as it was incredibly unusual to have a female secretary).

Of course, a straw eventually breaks the camel's back - in this case, Emma discovers that Marlowe never read more then a paragraph of each of her manuscripts before chucking them in the dustbin. For once in her life, she gives in to her emotions (in this case, rage and disappointment) and quits without notice. When Marlowe's company falls into absolute chaos without Emma's constant assistance he tries to coax her back and she launches into a passionate diatribe about what an asshole he is.

And - aha! That is how love blossoms. I loved it. Emma's true personality was been so smothered by rules of propriety that when she was bound by employer-employee boundaries she was a dull little mouse that Marlowe never had a second glance for. However, once she quits and throws caution to the wind, her real personality is revealed to Marlowe, who wastes precious little time in falling in love with it and becomes determined to bring it to the surface in Emma as often as possible.

And that's when Marlowe starts noticing the beautiful parts of Emma. She's still not an Amazon, but once Marlowe starts paying attention to her, he notices the little parts of Emma that are beautiful - the colour of her hair, her smile, her eyelashes. The little parts of everyone that are beautiful. There's a lyric from Roger & Hammerstein's musical Cinderella that seems particularly relevant to discussions like these, where Cinderella sings, "Do I love you because you're wonderful? Or are you wonderful, because I love you?" That's kind of the thing here - I've come to accept the story where the hero is struck blind by the Heroine's beauty (and vice versa) to discover later that she comes with the bonus of a great personality. But I have to say, I really prefer the story where the heroine becomes beautiful because the hero loves her so much.

Not to mention this story was well-written and paced. This was one of those stories where I loved the heroine as much as the hero. The book is partly about Marlowe, but his change in his life view is relatively minor in comparison and happens relatively quickly at the end of the novel. Most of this book is about Emma's transformation from a repressed rule-follower whose devotion to propriety has gained her absolutely no advantage in life to a woman willing to ask (and fight!) for what she wants.

Laura Lee Guhrke also manages to jam-packing the novel with a wealth of period detail. This is relatively late Victorian period here, not Regency, but everything from the clothes to table arrangements to home decor are lavishly described while at the same time fitting in with the story and not appearing a huge chunks of awkward exposition. This book had a great setting as well as fantastic and emphatic characters. This book is a combination of nothing but good things, so it receives a well-deserved A.
Posted by AnimeJune at Monday, June 23, 2008