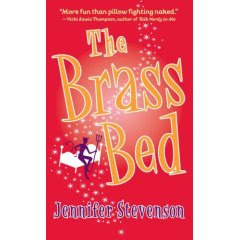 The Chick: the ridiculously-named Jewel Heiss, a fraud investigator with extreme sexual proclivities who can't keep a partner because she's literally screwed and dumped every man in the office.
Shady Past: Oh noez! She's an orphan! She lost the family farm! Guess she better fuel all those abandonment issues into an insatiable appetite for weird sex! Also, likes to get it on with swans.

The Dude: Clay Dawes, a con man who's convinced dozens of lonely housewives that his ancient brass bed can cure their sexual dissatisfaction. In return, he allows them to convince him that they keep coming back because he's such a sweet guy, and not because there's actually a magical sex demon secretly possessing his bed.
Shady Past: Wah, wah, his mean ol' con man dad kept dumping girlfriends so Clay never had a mommie. Guess he better fuel all those Oedipal issues into an pathological desire to lie and manipulate people!

The Other Dude: Lord Randy, a Regency cad who sucked in the sack so his ex-girlfriend cursed him to remain in a brass bed until he magically gave one hundred women an orgasm - Jewel Heiss just happens to be the big one-oh-oh. So he has to give her several big "oh"s, if ya know what I mean.
Shady Past: Boo hoo, he's got Stockholm syndrome and doesn't like the fact that he's dependent on a woman for everything from freedom to Thai food. Guess he better fuel all those misogynist thoughts into an uncontrollable need to get nekkid and/or possess various pieces of furniture at comically inopportune times!

The Plot:
Jewel: I like sex! All the time in fact! Can't get enough of it!

Randy: *materializes* Free sex! Come and get it! Every one hundredth customer gets a free sex slave!

Clay: Let's see if I can manipulate fraud investigator Jewel into having sex with me. Good morning....

Randy: *materializes* Last one in Jewel's a rotten egg!

Jewel: Awww...I don't have to pick one of you guys or resolve any of my personal or sexual issues right now, do I?

The Word: Nuh-uh, you'll have to wait until www.greenmanreview.com posts the full review!