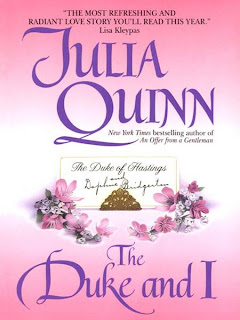 The Chick: Daphne Bridgerton, one of eight (!) liberal, wealthy siblings, all currently unmarried, although their formidable mother Violet is trying desperately to rectify that situation.
The Rub (yes, I'm changing "shady past" to "The Rub." It makes more sense - not all characters have hidden secrets but ALL have some major problem or other that needs to be resolved.): All the boys of the ton think she's funny and kind and caring, but see her as too much of a friend to consider a romantic attachment.

The Dude: Simon Basset, Duke of Hastings, a "rake" (the term is bandied about very loosely in this book) who is determined never to marry or have children, and avoid society as much as he can. However, as he's handsome and a Duke, every mother within a 50 mile radius is determined to marry him off to their daughters.
The Rub: Spent his childhood overcoming a vicious stutter, and lives in the shadow of his deceased, abusively neglectful father.

Daphne: I want to marry and have children, but men won't notice me!

Simon: I've vowed never to marry or have children, but women won't leave me alone!

Simon: Alright, as long as I don't have to get married.

Simon: Alright, as long as I don't have to have children.

Simon: Yee-haw! I mean, DOUBLE DAMMIT! I hate my daddy! I hate my st-st-stutter! I hate myself!

Daphne: Well, I love you.

1 Very Nasty Surprise Due to Inefficiency of Aforementioned "Sex Talk"

The Word: This is the first entry in Julia Quinn's Bridgerton series, beginning with the fourth child, Daphne. Daphne is exasperated with the boys of the ton who have nothing but the greatest respect for her but no romantic inclinations. She rightly perceives that if Simon, a manly, respected Duke, pretends an interest in her, than other men will follow suit.

Simon, new Duke of Hastings, agrees to the ruse because ambitious mothers are chucking their daughters at him like so many rotten tomatoes and he's promised himself (thanks to some seriously dark daddy issues) that he'll never marry or have children. Of course, since Simon and Daphne have to be in close proximity with each other for the ruse to convince people (and Daphne's mother who, while ridiculously eager for her daughter to wed, is no fool) an actual romance quickly develops.

What happens beyond is the interesting part. The Duke & I is an intriguing character study, and not only of Daphne and Simon. Daphne thinks she's unintentionally deflected suitors by being too nice, but Simon sees how her three older brothers have also scared away prospective matches with their overprotectiveness. He also asks about halfway through the story that if the men of the ton had to be peer-pressured into noticing her, why she thinks they're so worthy of marriage in the first place. As well, it's an unflattering portrait of the Season of the ton, where mothers who are perfectly friendly people in real life are forced to become shrill-voiced saleswomen in order to give their daughters a future. In this period of history, if a woman didn't marry well, she had nothing.

In Simon's corner, he has to deal with some depressing issues about himself, and the utter loathing he has for the very idea of peerage thanks to his abominable father, who reveled in his authority as Duke. Simon hates everything to do with his father, including his position, and his hackles are raised at nearly every social function as some old Earl or friend of his father's always manages to corner him and offer condolences or congratulations for his dead father and position (respectively), which Simon has no intention of mourning or enjoying. Quinn very ably shows that, however justified his hatred of his father is, it has poisoned and corrupted his ability to act in his own interests. If his father liked something, Simon must hate it, and if his father hated it, Simon must like it. As the book progresses, Daphne has to help Simon realize how this mindset has actually prevented him from making his own choices.

In many ways (particularly in the narrative structure), I found The Duke & I to be similar to Lisa Kleypas' Secrets of a Summer Night. I always have spoilers in my reviews but this can get rather specific so read at your own discretion. In both books, the hero (both named Simon!) and the heroine get married about three-quarters through the novel, and, coincidentally enough, because the heroine is compromised in public. The placement of the marriage in the narrative is odd - in most novels the marriage (if a marriage is not part of the plot, like a marriage of convenience story) comes at the end because it serves as the resolution to the ultimate problem of whether the Hero and the Heroine can Make It.

But in both novels, the marriage actually exacerbates a problem. In Summer Night's case, Annabelle has to come to terms with how her marriage to a tradesman has alienated her from both the noble and the middle classes, and has to (at least partially) resolve the problem by proving that her marriage to Simon was the decision of a woman in love with a man, not the choice of an impoverished, pampered aristocrat who married an industrialist to keep herself in silk stockings.

With Duke, Simon's personal life decisions based on his abusive father's treatment of him are brought painfully to the surface by his marriage. Being man and wife puts Simon and Daphne in a more intimate position where Simon can no longer just say, "No children, and that's that," tip his hat, and gallop away. He can no longer withhold himself from Daphne, and the sudden exposure of his personal problems creates a breach that must be mended by the end of the novel. How this happens I won't be so crass as to give away. You'll have to read it yourself. But rest assured, it'll be a pleasant experience. B+.
Posted by AnimeJune at Sunday, June 15, 2008