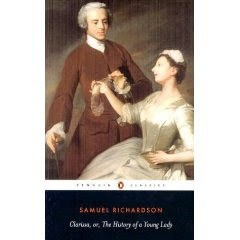 The Chick: Clarissa Harlowe. Beautiful, fashionable, kind, loyal, with an unimpeachable moral character, this third child of a wealthy, untitled family is forced to fend off her relatives' repeated attempts to marry her to the repulsive Mr Solmes, as well as Robert Lovelace's ruthless advances.
The Rub: She's a self-righteous doormat, and borders on Mary Sue territory. Also displays an unfortunate 18th-century heroine tendency to render herself physically ill due to emotional overstimulation.
Dream Casting: There's really no one I could possibly cast as Clarissa, who is repeatedly lauded as the "best of all women," and perfectly perfect in every way.

The Dude: Robert Lovelace. Wealthy, handsome, charming, and the heir to a title - his courtship of Clarissa becomes increasingly obsessive, as he becomes determined to have her, by any means necessary.
The Rub: He's an unabashed rake - and not one of those pansy rakes with a ridiculous code of honour like "never defile the innocent." He's not above using lies, manipulation, mail tampering, elaborate disguises, drugs (on himself and others), and rape to get what he wants.
Dream Casting: Again, can't really cast this dude, who makes every other rake in romantic fiction look like a lovestruck schoolboy.

Clarissa: No thank you.

Lovelace: Now will you marry me?

Clarissa's Family, Uncles, and Anna: Well, you might as well marry Lovelace now.

Messenger: Hey - I just got this letter saying the family's willing to totally forgive Clarissa for everything that's happened and ... oh, am I too late?

Clarissa's Family: WE ARE ALL IDIOTS. *PUNISHED*

1 Use of Ipecac For Romantic Purposes

The Word: This is the reader's Everest. Something that people will read once in their lives in order to say that they did it, but might never read ever, EVER again. Clarissa is well-known as the longest novel originally written in the English language, clocking in at just under a million words. Like Richardson's previous (and much shorter) novel Pamela, it's written in letter format. Half the novel involves Clarissa's letters to and from her family and friends regarding her changed circumstances, and the other half involves Lovelace's letters to and from his family and rakehell buddies as he cooks up his dastardly plans to snare Clarissa into marriage, all the while scrawling pages' worth of self-justification for his actions.

Clarissa is, as I've mentioned previously, perfectly perfect in every way. At the start of the novel, she's the darling of her wealthy bachelor uncles, her friends, the community, and her parents. When Robert Lovelace, a handsome cad, starts courting her, her perfect world starts to slip and long-hidden resentments in her family bubble to the surface, particularly among her jealous siblings James and Arabella. James knew Lovelace at university and hated him for being popular, rich, and handsome. Lovelace previously courted Arabella, only to dump her for Clarissa. The siblings also possess a deep resentment and jealousy of Clarissa herself, as she's the family favourite who unexpectedly inherited the largest share of her late grandfather's wealth just because she's so darn cute, and now stands to inherit the money of the bachelor uncles as the Apple of Their Wealthy Unmarried Eyes.

Together, James and Arabella conspire to convince the family that Lovelace's intentions are dishonest, and that the only way to protect Clarissa from his dastardly intentions is to marry her off to Mr Solmes - an elderly, wealthy widower with a reputation for being a miser. Clarissa doesn't particularly care for Lovelace, either, but when she refuses to marry Solmes, her refusal - a completely unexpected act of defiance from a previously perfectly obedient daughter - is construed as an indication of her illicit passion for the rake. This only stokes her family to go to greater lengths to try and force her to marry Solmes.

Clarissa maintains her refusal - she disapproves of Solmes' miserly character and his unkind treatment of his family. However, through James and Arabella's machinations, Clarissa's defiance is interpreted as spoiled selfishness and soon the whole family turns against her. Imprisoned in her room for disobedience, she retains only one friend, to whom she must write in secret: the fantastically bitchy spitfire Anna Howe.

Of course, when Lovelace hears about her stubborn refusal, he also interprets her unwillingness to marry Solmes as a sign that she harbours feelings for himself. He maintains a secret correspondence with Clarissa through subtle emotional blackmail - he writes that he's so passionately on fire for her that if he doesn't communicate with her he's sure to do something uncontrollably drastic. Clarissa, to maintain propriety and shield her family from scandal and violence, agrees.

The pressure from her family rapidly escalates, to the point where Clarissa becomes convinced that they are planning to forcibly marry her to Mr Solmes, whether she wills it or no. Lovelace suggests that Clarissa run away and, with his assistance, stay with a female relative of his until she's allowed to inherit her grandfather's wealth and become independent. Clarissa reluctantly consents, then changes her mind at the last minute. Lovelace, however, has planned ahead and promptly tricks Clarissa into fleeing with him, and things go downhill from there.

Clarissa's family, convinced she has eloped with Lovelace and has sacrificed her virtue, wants nothing more to do with her, and Lovelace shows an increasing desire to have entirely too much to do with her. Clarissa's only hope lies in protecting herself from Lovelace's advances while trying to negotiate with her family through letters and her friend Anna's assistance.

The rest of the novel is a battle of wills - with Lovelace rifling through every trick in the rake's handbook to take advantage of Clarissa, and Clarissa using all the powers of gentle persuasion she possesses to maintain her distance from Lovelace and salvage enough of her reputation to regain her family's approval.

I read this book for Lovelace and Anna Howe, easily the two most entertaining characters in the novel. Lovelace is a complex character - a rake, to be sure, whose initial intentions for Clarissa are far from pure. To him (at least for the first 750 pages!), Clarissa poses the ultimate challenge, the white whale to his Ahab. To tarnish the reputation of such a renowned, kind-hearted, chaste virgin would immortalize him within the ranks of the world's most notorious seducers for eons. His seduction of her is also motivated by anger - insulted by the presumption of the Harlowe family for expressing a low opinion of him (considering them to be untitled upstarts whereas he is the child of peerage), the shearing of their fluffiest, most spotlessly white sheep would be a cutting blow indeed.

However, around the novel's mid-point, his pursuit turns more into obsession, as he realizes that he might just be falling in love with her, for real. Does this change the nature of his seduction? Not a whit. His game plan remains essentially the same - he'll stoop to any means, fair or foul, to snare Clarissa. At one point, hilariously, he intentionally drinks ipecac and makes himself sick in order to ellicit sympathy from Clarissa - and it WORKS! The only difference after the midpoint of the novel is that he fully intends to marry her, and justifies that he'll then have the rest of their lives to make up for his deceit and prove his whole-hearted devotion.

As for Anna Howe, had I not known this book was actually written in the 18th century, I might have considered her character a bit of an anachronism - she's fiesty, she's sassy, she's whiptongued and smart as a tack, and has no problems speaking her mind. Whereas Clarissa is far too polite and tranquil to condemn her family's short-sighted and selfish actions, Anna has no such compunction. Clarissa is all too willing to take shit from her family and sit quietly - whereas Anna takes a gleeful delight in composing searing diatribes against the narrow-minded Harlowes, Lovelace's machinations, and the stupidity of the world in general for causing any stress whatsoever to Clarissa's well-being. Most of Clarissa's plans for redemption involve waiting out the storm of her scandal with saint-like patience, while Anna councils direct action.

My only disappointment with Anna is that the novel obviously paints her as Clarissa's "problem" friend - a well-meaning but imperfect lady meant to improve under Clarissa's benevolent influence (her opposite number is Lovelace's confidante Belford, whose knowledge of Lovelace's machinations horrifies him into eventually abandoning his rakish ways). When Anna sends letters of vitriol against Clarissa's family and suggestions that Clarissa take legal action against them, Clarissa responds with pages and pages of lectures on the virtues of familial loyalty, temperance, and tranquility, to which Anna will respond with slavish gratitude that Clarissa (perfect, lovely Clarissa) is so willing to tolerate her devilish temper and instruct her on the proper manners of a lady.

This is particularly apparant when the girls discuss Anna's boy problems - throughout most of the novel, she's courted by Charles Hickman, a man who's upright, well-off, kind-hearted and gentle. However, Anna also thinks he's boring and her inferior in intellect - a trait she cannot abide. In one of her most articulate letters, she rails against the unfairness of society that makes the husband the representative of the family. She can't stand the thought of her person, status and reputation being subject to a man who's not as smart as she is - an opinion I completely agreed with and found entirely refreshing to read in an 18th century novel. However, Clarissa naturally responds with more lectures on the natural state of wifely submission, etc. etc., along with a few well-aimed jabs at how difficult smarter men can be (in one letter, Anna whines that Hickman is not as exciting as Lovelace, to which Clarissa responds, "And that's bad HOW?").

With all of this, Clarissa is an interesting but difficult read, mainly because of the main character. In theory, I admired her actions, but in practice it was frustrating to read. In a nutshell, the plot is: "Clarissa says no." That's it, really - "no" to her family's demands, "no" to Solmes' marriage proposal, "no" to Lovelace's plots and schemes. But despite the fact that she actually shows enough spine to refuse to perform things she doesn't believe in, she also never says "yes," - that is, take an active role in her future and fight for her rights. Of course, doing so (gasp!) wouldn't have been ladylike, and Clarissa is never permitted to be anything less than the 18th century feminine ideal. Thank goodness for Anna Howe. B.
Posted by AnimeJune at Saturday, October 04, 2008