"A Dangerous Beauty," by Sophia Nash 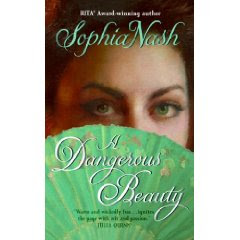 The Chick: Rosamunde Baird. As a teenager, she was caught stealing a kiss from a duke's son, but refused to marry him and eloped instead with a country squire who turned out to be an abusive monster. Her actions led her to be ostracised from both her family and her community. Now widowed and penniless, she has nothing to lose.
The Rub: On top of the fact that she believes she's barren and nearly the entire country thinks she's a whore, the one man who shows her kindness is the younger brother of the duke's son who ruined her reputation.
Dream Casting: Bionic Woman's Michelle Ryan.
The Dude: Lucifer (I'm not kidding) "Luc" St. Aubyn, Duke of Helston. A former Navy commander and war hero, he inherited the dukedom when his older brother died at sea. He's known far and wide as "Lord Fire and Ice," for his passion in the bedroom and subsequent refusal to commit afterwards.
The Rub: Growing up in family with not one, but two abusive husband and father figures has convinced him that "happy marriage" is an oxymoron. His estate is also in secret financial straits, which is he secretly trying to fix with the secret royalties from his secret novel, which he's written secretly.
Dream Casting: Clive Owen.

Ata: What? Are you BUSY?

Luc: I want to love you, but evilness is genetic, don't you know!

Rosamunde: I want to love you, but everyone thinks I'm a slut!

1 Obvious Sequel Setup (widow Georgianna - what's she been up to?)

The Word: I read romance the way my father reads science fiction - with the expectation that 70% of what I read will be awful, 20% will be pleasantly enjoyable, and 10% will be a glorious joy to read and is the reason I'm willing to slog through the other 90%. Mary Balogh's The Secret Pearl is one such novel, Jennifer Crusie's Bet Me and Welcome to Temptation are others, and this book, A Dangerous Beauty, by Sophia Nash, is another.

Rosamunde Langdon, daughter of an earl, is the family favourite. At seventeen, she's a rides-horses-astride, hair-blowing-in-the-wind, beat-boys-at-sports kind of fiesty female heroine who is sadly not uncommon in many lesser romances. Her behaviour has never been checked because her daddy and her big brothers love her to pieces. She also believes herself to be in love with Henry St. Aubyn, son and heir to the Duke of Helston, and steals a kiss from him after beating him at a horse race. However, Henry admits he's in love with another.

Unfortunately, they were apparently caught, and her and Henry's outraged fathers insist that they marry. Rosamunde doesn't understand why everyone is so upset by what she saw as a harmlessly flirtatious peck on the lips (and for much of the novel, neither could I). In a lesser romance, this fiesty Welsh lass and this nervous cold duke's son would enter into an unwilling marriage only to (could it be?) truly fall in love later.

Not so for dear Rosamunde. Instead of conceding to her father's demands, she hastily elopes with a country squire - her pride believing it better to marry a man she barely knows than a man who loves someone else. However, this is a mistake she lives to regret. Her father and brothers sever all ties to her, the community shuns her as a whore, and her husband turns out to be a heartless golddigger who insists on controlling every inch of her life. Only her sister Sylvia stays true to her.

Eight years pass. Rosamunde is no longer an adventurous, winsome girl. The eight years of misery under a cruel husband's thumb, and all thanks to one bold kiss, have taught her to hide her high-tempered nature under a dampening blanket of submission, passivity, and compliance. She blames her natural spirit for the mess made out of her life and reputation, so she's spent her appallingly miserable marriage determined never to let her passionate heart come out of hiding.

Now widowed and penniless, she receives an invitation from Lady Ata, Dowager Duchess of Helston, to attend her granddaughter's wedding and join her Widows Club, an elite circle of husbandless women Ata entertains and discretely obtains livings for. Rosamunde (as well as Sylvia, who's been living with her and her husband for all these years) has no other option - unless she wants to return to her deceased husband's cottage and submit to the lecherous intentions of his disgusting cousin. With deep misgivings about appearing in public again, she accepts.

The other wedding guests are all too obviously aware of her past, and (despite Ata's support), bitterly resent her presence. All except for Luc, Duke of Helston, and younger brother to the now deceased Henry. He notices the hints of fire that simmer underneath Rosamunde's quiet and reserved exterior. He's also a person who hides his true nature - in this case, a bookish intellectualism and literary ability he masks with a prickly shell of scalding cynical wit. Intrigued by the hidden depths lurking underneath Rosamunde's tranquil exterior, he makes it a quest to provoke, encourage, and please her in order to reveal the strong woman hiding within.

This was a delightful novel to read, on a number of levels. Mostly, this was thanks to Rosamunde's character. I've encountered so many devil-may-care heroines who somehow manage to get away with being anachronistically feminist that I enjoyed reading about a similar heroine who actually encounters social repercussions to her heedless actions. While even I thought her downfall at the beginning of the novel seemed exaggerated and a little contrived, the book surprised me by explaining it very well at the end with a twist that truly came as a surprise while still being heralded with significant hints.

Similarly, Luc was a surprise - a literary-minded writer who masks his true skills under an alpha male exterior. However, I felt his "devilish" nature was a bit overdone - I could understand how he could believe himself to be evil, or at least prone to evil behaviour, being the descendant of two generations of cruel men who abused their wives terribly, but did he really have to be named Lucifer Judas Ambrose St. Aubyn, Duke of HELston? And this isn't just me getting angry over a small detail - the novel plays on the pun of Helston being "Hell-ston" way too often.

That being said, the pairing of Rosamunde (who hides a dominant spirit beneath a submissive appearance) and Luc (who hides a vulnerable heart beneath an abrasive exterior) led to beautiful (and darkly funny) exchanges of dialogue and action. In the true spirit of opposites-attract romance, their differences turn out to be complementary rather than contradictory. Luc's provoking comments stir Rosamunde's bold temper, while Rosamunde's patience and acceptence win through to Luc's hidden tenderheartedness.

Also (and this is similar to one of the reasons I loved The Secret Pearl), the sex scenes are few, pointedly relevant, and have realistic consequences. The book is deeply sensual regardless thanks to Sophia Nash's lush writing style, and the scenes of intimacy are all the more potent because they are carefully used.

Rosamunde is, in this case, an Orgasmless Widow, a romantic cliche that is often derided, although I frankly don't understand why. In contemporaries, of course, the Orgasmless Widow cliche is a bit silly because it's often a contrived way to both demonize the heroine's previous husband and render her sexually inexperienced without being a virgin. In historicals, though, the Orgasmless Widow is fairly realistic. Sex Ed wasn't a big issue back then, and sex wasn't as clinically understood either. While there probably were a few talented lovers back then, it wasn't unreasonable to assume that many marriages, while happy, probably weren't mutually sexually fulfilling.

Anyway, back on topic - Rosamunde's husband abused her in many subtle ways, one of which was his selfish and possessive way of having sex, which taught Rosamunde to despise the feel of a man's hands. To ease this, Luc proceeds to make love to her in a long, detailed, several-pages-spanning love scene - without using his hands. I won't explain more than that, because it's a beautifully written, narratively relevant, and sexy scene that needs to be experienced firsthand.

Romances can be written in almost any setting (because love happens everywhere), with any type of people - but the true test of a good romance resides in the strength of the heroine and hero and the chemistry they experience together. Sophia Nash provides a fantastically detailed setting, appealing secondary characters, real social drama - but it's the combination of these two unique, damaged, multifaceted characters that made A Dangerous Beauty such wonderful experience to read. A few flaws (such as Rosamunde's sister Sylvia's martyr complex, and an epilogue that seemed unrealistic and overcompensating), keep this from being a perfect A, but I still want to buy this book (I've borrowed my current copy) and keep an eye out for her next Widow's Club novel, The Kiss. A-.