"The Serpent Prince," by Elizabeth Hoyt 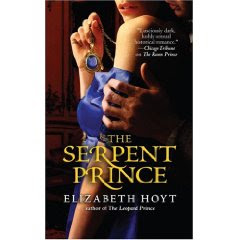 The Chick: Lucy Craddock-Hayes. An innocent member of the country gentry, she discovers Simon Iddesleigh lying in a ditch - naked, unconscious, and beaten to within an inch of his life. She takes him home to nurse him back to health.
The Rub: Simon is a sophisticated, urbane aristocrat, while Lucy is a simple country miss. What could they possibly have in common?
Dream Casting: A younger Jennifer Connelly.

The Dude: Viscount Simon Iddesleigh. Attacked while hunting for the men who conspired to kill his older brother, he quickly falls for the purehearted goodness of Lucy, whom he considers to be "his angel."
The Rub: Most of the men who murdered his brother are still out there, and Simon's determined to hunt them down one by one and return the favour. However, he's fully aware of the wrongness of his murderous intentions, and believes himself too damaged for a pious angel like Lucy.
Dream Casting: Buffy the Vampire Slayer's James Marsters.

The Plot:
Lucy: I say! A naked man! Finders keepers!

Simon: Wow, I feel better already. Want to get married?

Simon: I'll be back in a minute, I have to go powder my wig.

Two Skeezy Men Who Helped Kill His Brother: What?! You're still alive?

Simon: I challenge thee to a DUEL!

Simon: *overwhelmed by brooding angst**still alive, though* The only murderer who remains is Sir Rupert Fletcher!

Christian, Simon's BFF: But he's my dad! And a cripple! I challenge thee to a DUEL!

Lucy: No more duelling, and I mean it!

Simon: Anybody want a peanut?

Lucy: *leaves in a huff*

1 Act of Self-Pleasure Accidentally Walked In Upon (Lucy's!)

The Word: Lucy Craddock-Hayes is having a regular walk near her country home when she encounters a horribly beaten man left to die in a ditch. Without further ado, she has him carried to her house to convalesce. Once he regains consciousness, the man introduces himself as Viscount Simon Iddesleigh. Even though Simon won't tell her the exact details of his attack and Lucy's father makes his passionate dislike for the man perfectly obvious, Lucy and Simon hit it off. Lucy's bored with dull country life and her dull country courtship with a listless young vicar, and Simon is a welcome breath of charming, witty fresh air. On the other side, Simon believes himself to be a dark creature of sin and evil who likes taking refuge in the company of a good-hearted innocent like Lucy.

The hero who believes himself to be evil (or at least too evil for the heroine) is a common romantic trope. The reasons for these beliefs can range from the silly ("my father was an asshole, therefore I am destined to become an asshole") to the common ("I have sex and gamble way too much for the heroine to like me") to the realistic ("I am mentally scarred from fighting in the war").

Thankfully Simon has very understandable reasons for believing himself to be a demon. His brother, Ethan, was killed by a conspiracy of men who did not appreciate Ethan's moral objections to their plans. They did so by slandering Ethan's wife's name until Ethan (a terrible swordsman) was forced to challenge them to a duel, in which he died in less than a minute. Simon, in return, plans to do the same to the conspirators - force or trick them into calling duels, and then brutally defeat them. He's already taken one down, but has three more to go.

Again, revenge plots are common in romance novels, but this is the first one I've personally read where the hero acknowledges from the start that what he is doing is immoral and wrong, and experiences serious psychological consequences as he performs these crimes anyway. The oft-idealistic setting of the romance novel is usually very supportive of killing the "bad guys," but Hoyt refuses to demonstrate any righteousness in Simon's actions. The novel also (and this was the biggest surprise to me, who found the villains in Hoyt's earlier novel Raven Prince to be rather cartoonish) provides one of the most human romance novel baddies I've come across in a long time. Here we have a man who knowingly committed an evil act to cover up a serious mistake, but he had sincere, realistic, and understandable motivations for doing so. Yes, Virginia, there do exist people who do bad things for good reasons that don't make the bad things they do any less bad.
All of this serves to put Simon in a pretty serious moral, emotional, and psychological quandary as he continues his mission of vengeance, and also serves as the main romantic obstacle between himself and Lucy, who condemns his actions outright.

The disappointing thing about this novel, was that Simon's dueling was pretty much the only big romantic obstacle. Lucy is a bit of a non-character - she has no dark past, she has no niggling personal flaws that are solved by book's end, and she has no serious issues to deal with. She's human enough to escape being a Mary Sue, but she really has no personal investment in the romance. With her innocent country ways, she has an excellent influence on Simon and his personal darkness, but there's nothing that Simon can really do for her (besides the obvious - really good sex and financial security).

This made the romance rather lopsided, as Lucy served more as a catalyst who spurs Simon's personal recovery than a romantic character in her own right who is improved by Simon's company. In other novels, both hero and heroine come into the relationship with emotional baggage, and one of the joys of a good romance is watching how the union of two peoples helps them both to recover from their own problems.

This is why I gave this generally well-written novel this particular grade - because, frankly, the excellently realized revenge portion of the story completely overshadowed the romantic aspect of the book - turning it into something akin to an action movie where the scarred, hardbitten cop is the centre of the film's narrative but he has some winsome B-movie starlet as the requisite love interest who inspires him to greater heights of heroism but doesn't really contribute anything other than estrogen and the occasional damsel-in-distress scene.

I've always seen romance as a partnership between the hero and the heroine, but in The Serpent Prince, Simon ran the show while Lucy watched lovingly from the balcony. Sorry, but she really wasn't quite my cup of tea. B.
Posted by AnimeJune at Wednesday, October 22, 2008