"The Duke Next Door," by Celeste Bradley 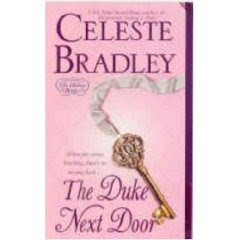 The Chick: Deirdre Cantor. Since she was sixteen, she's been in love with Calder Marbrook, the Marquis of Brookhaven (and heir to the ailing Duke of Brookmoor). When her cousin Phoebe, the Marquis' fiancee, runs off with another man, Deirdre offers to marry him in Phoebe's place.
The Rub: Deirdre jumped into marriage partly to escape her evil stepmother, but when Calder turns out to be colder and more controlling than she realized, she wonders if she's only fled one cage for another.
Dream Casting: Mamma Mia's Amanda Seyfried.

The Dude: Calder Marbrook. Nicknamed "The Beast" by the ton for his brooding nature and the suspicious death of his adulterous wife, his fiancee Phoebe's desertion has only fanned the flames of rumours that he's a violent and abusive man. When Deirdre offers her hand in marriage as a way to quiet the whispers, he accepts on the spot.
The Rub: His first wife was a deceptively beautiful woman who secretly hated him and died in a carriage accident while fleeing with her lover, so Calder naturally has some trust issues when it comes to beautiful women.
Dream Casting: A Knight's Tale's Rufus Sewell.

Calder: Dammit! My fiancee's absconded with another man!

Deirdre: Marry me instead!

Calder: Sure, why not?

Calder: Congratulations, Meg, you have a new mommy!

Calder: Chop, chop, Deirdre! Turn my daughter into a proper lady or no pretty sparkly things for you!

Deirdre: Okay, I will.

Calder: God, you annoy me.

Calder: You're a whore!

Deirdre: No I'm not.

Doctor: You can never have children!

Deirdre: *vomits* Oh yes I can!

1 Hero With a Dark Marital Past

The Word: Many years ago, a cranky asshole with aristocratic ambitions wrote a will stating that his enormous fortune would go to the first granddaughter (or great-granddaughter) who managed to marry a duke and elevate the family into a higher social circle. One of the granddaughters, Phoebe, nearly succeeded in marrying Caldor Marbrook, heir to the Duke of Brookmoor, but ran off with his bastard half-brother instead (the events of Desperately Seeking a Duke).

In The Duke Next Door, Caldor's reputation is taking a beating thanks to Phoebe's desertion. His first, adulterous wife died under mysterious circumstances that did not reflect well on him, and Phoebe's change of heart has renewed Society's belief that he is the "Beast," a villainous man who women can't help but run away from.

Phoebe's cousin Deirdre, who's (conveniently) loved Calder from afar all these years, seizes her chance and proposes marriage in order to quell the rumours. To their mutual astonishment, Calder says yes. However, what Deirdre has not taken into account in her hasty proposal is the inarguable fact that Calder is a big FLAMING IDIOT. Deirdre arrives at her new home, Stupidhaven, ancestral seat of the Marquis of Dumbass, to find out that Caldor has a daughter, Meggie, whom he's never mentioned before.

And just as Deirdre had no idea her husband had a daughter, neither was Meggie informed that her father had married. Calder, heir to the Duke of Asshat-ery, thought it would be more convenient to tell them both at the same time to spare him from repeating himself. That's not all - when Deirdre becomes understandably upset, Calder reminds her of her marital oath of obedience, and promptly orders her to be a mother to Meggie and turn her into a proper young lady. Marquis Moron lays the fucking hammer down: if Deirdre doesn't do as she's told, he won't buy her any dresses or let her attend any balls or parties!

Cue chorus of sassy "Oh No He Di'n't!"s. It's here that the novel descends into ultimate, frustrating stupidity as two equally short-sighted and ridiculous characters act out their melodramatic and unrealistic power-struggles.

Deirdre grew up under a cruel stepmother who used abusive lessons to train Deirdre in the ways of society so that she might marry a duke first and secure Grandpa Asshole's money. While at first she thought she'd escaped such tyranny by marrying Calder, she now sees that his "flaming passion" or whatever was really just the fire she jumped into to escape the pan. Her plan? To punish Calder by being as fucking irritating as possible, which involves most of the ideas in the Firey Heroine Handbook: turning up where she shouldn't, finding offense in every single thing Calder says, spoiling (and enlisting the assistance of) his daughter Meggie, converting all of Calder's household staff to her charms, flirting with harmless sadsacks until they turn into Obsessed Stalkers, and disobeying perfectly rational directions because her Fiesty, Independent Spirit(tm) won't allow her to obey any order made by That Cruel Man.

That being said, Calder's no prize either. His nickname "The Beast" is surprisingly appropriate - anyone here watch Disney's Beauty and the Beast? Remember how the Beast, at first, couldn't express his feelings so he basically just ordered Belle about ("You will join me for dinner. THAT WASN'T A REQUEST!" *doorslam!*)? This is pretty much Calder for the first half of the book - he catches Deirdre in some awkward situation, and is so blustered at how sexy she is that he acts like a douchebag and reminds her how she is his wife, that he has the legal right to do anything he likes with her, and he will, once ... once he wants to, he just doesn't want to right now, because he's busy, with - with manly stuff, yeah, and totally isn't not doing stuff to her because he's a coward. Yeah. Once he wants to do something, then the hammer will come down ("the hammer is his penis").

There's also the fact that he is a terrible father. I don't mean he's absent-minded, like Jem Strange in Eloisa James' Duchess By Night. I don't mean he isn't home enough, like Adam in Mary Balogh's The Secret Pearl. He essentially packs Meggie off to different estates and ignores her whenever he's not bitching at her to sit still and be quiet. For the majority of the book he sees her as this pesky responsibility. There's even an ugly hint somewhere around the middle of the novel that he can't bear to look at Meggie because she looks like his late wife, who was a Big Fat Ho.

While thankfully Celeste Bradley doesn't follow through with this, Calder never shows any particular affection for or attachment to his daughter throughout the book, even with Deirdre's supposed "help." He intended to pack Meggie off into Deirdre's care, and that's essentially what happens - Deirdre takes responsibility for Meggie while Calder runs around being the same jackhole he's always been. At the end of the book, Calder and Meggie are supposed to have this moment of parental bonding - but since it's a scene where Calder lets Meggie threaten a inn full of drunken louts with a pistol, it's hard to take too seriously.

And that's essentially my main problem with this book - I found it so hard to take these characters seriously because they don't act like real people, they acted like tropes. And not only the heroes - the secondary characters (like Deirdre's maid Patricia, who's so stereotypically Irish she shits leprechauns) never seem fully realized, either. Because of this, as the novel progresses their actions become more and more outlandish, until the so-called climax when events spiral into downright stupid.

As well, this novel doesn't totally work on its own. Yes, it's part of a trilogy (The Heiress Brides), but romance trilogies aren't the same as fantasy or sci-fi trilogies. Fantasy trilogies essentially tell one story over three books, so you can't read them out of order. Romance trilogies, however, are usually three separate stories that share a common thread or theme - the protagonists of the novels might be siblings, or part of a club, or used to serve together in the war. So while it's easier to read them in order, it usually isn't a huge hassle if you accidentally pick up the second or third book at the bookstore.

Not so here - this book heavily references the events, themes, and characters of Desperately Seeking a Duke, to the point where people reading The Duke Next Door first will be left in the dark. For instance, this novel repeatedly insists that Deirdre's stepmother Tessa is an evil, treacherous viper - but we never actually get to meet her until one scene near the end. The relationship between Deirdre and Sophie, and Deirdre and Phoebe (who never appears), is based on previous history that is poorly explained. Also, there's a subplot about the Duplicitous Solicitors and their schemes to undermine the granddaughters' attempts to marry dukes so that they may keep Grandpa Asshole's money for themselves that requires at least some knowledge of Desperately Seeking a Duke for it to make sense.

I'm sorry to say - wait, no I'm not sorry to say that Celeste Bradley's The Duke Next Door was a big giant dud. It didn't even reach the level of the guilty pleasure - I can sometimes tolerate characters who do silly, unrealistic, or anachronistic things if I can relate to the characters themselves and their motivations for the silly, unrealistic, or anachronistic things they do. I just couldn't do that with cold, selfish, "boo hoo lonely boy" Calder, or Deirdre, who acted Fiesty, Defiant, and Disagreeable for no understandable reason than because Celeste Bradley appears to have rubber-stamped "Fiesty, Defiant, and Disagreeable" onto her forehead instead of coming up with real character development.

I'm really glad I got this book at the library, because I don't think I would have been able to recover from the embarassment of actually having paid money for this. D.
Posted by AnimeJune at Saturday, October 25, 2008