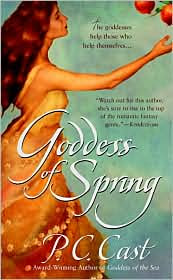 The Chick: Carolina "Lina" Francesca Santoro. A lonely forty-something divorcee whose bakery faces financial ruin, she is contacted by the Greek Goddess Demeter and offered a deal: if she'll spend six months in the mythical Underworld masquerading as Demeter's daughter Persephone, then Persephone will take Lina's place and turn her bakery into a success.
The Rub: Lina is forbidden from telling anyone that's she not really a goddess - even Hades, King of the Underworld, who turns out to be much sexier and accommodating than Demeter led her to believe.
Dream Casting: As Lina, Laura San Giacomo. As Persephone, Anne Hathaway.

The Dude: Hades. As in, Greek God, brother to Zeus and Poseidon, and ruler of the Underworld.
The Rub: His connection with the dead, and the fact that he's not an air-headed moron, renders him particularly unsuited to the company of his fellow deities, so he's a bit of a celestial outcast. Also, turned one of his mortal ex-girlfriends into a sprig of mint when she tried to throw herself off a cliff to escape from him (for reals).
Dream Casting: Heroes' Sendhil Ramamurthy.

The Plot:
Lina: My bakery is failing!

Demeter: *poof* I can help! Just switch bodies with my daughter Persephone!

Demeter: Have fun in the Underworld!

Hades: I think you're the awesomest of all.

The Actual Persephone: Hades, don't be an ass.

The Word: Carolina Francesca Santoro, or "Lina" to her friends, is in a bit of a fix. Thanks to an error made by her slimy accountant, she owes the IRS a huge debt and runs the risk of losing her bakery. In an attempt to find new recipes to attract more customers, she comes across a used cookbook for "Italian Goddesses." In it is a recipe for a delectable pizza that requires meditation and invocations to Demeter along with flour, butter and spices. When she performs the spell, she gets zapped into another world and finds herself face-to-face with Demeter.

Yes, Demeter. Goddess of the Harvest, and mother to Persephone, Goddess of Spring. Demeter is annoyed because the mortals in her world have been pestering her about the lack of feminine attention in the Underworld. Demeter's daughter Persephone, as the goddess of light and flowers and springtime, etc. etc., would be perfect for the job, except that Demeter worries her daughter is too immature and frivolous for the responsibility. So she switches the soul of her daughter with that of Lina, sticking forty-three-year-old Lina in the body of a smokin' hot young Goddess.

Lina, Demeter tells her (she doesn't really offer Lina a choice), will take Persephone's place and sojourn in the Underworld for six months to bring some sweetness and light to the inhabitants. Meanwhile, in Lina's body, Persephone will use her natural light and sweetness to make Lina's bakery a financial success, and maybe grow up a little, too. Lina, knowing her Greek mythology (particularly the story about the Rape of Persephone by Hades), balks, until Demeter conveniently tells her that most of the mythology humans have heard in her world is false, and that Hades is actually a boring loner killjoy, uninterested in women.

After that, she swears Lina to secrecy and plunks her down at the entrance to Hades, where things begin to take a very familiar turn if you've read Cast's other novels, particularly Divine by Mistake. However it's not nearly as good. Like Divine, Lina has to pose as a Goddess while people a) fall in love with her, b) swear eternal loyalty to her, c) plead to serve her hand and foot. And she also gets to ride fabulous horses. And she's pampered in every conceivable way. And everybody loves her.

Divine by Mistake's Rhiannon was able to escape being a Mary Sue because the novel also had an overarching conflict - evil demons to fight in the first book, her Bizarro-world evil twin in the second. There's no such unifying story in Goddess of Spring, which made it by turns tedious and irritating. Most of the book is like reading about someone else's trip to Disneyland, as Lina gasps with delight over the endless beauties of the Underworld (over and over again), and sickeningly cute creatures (fairies! fireflies! nymphs!) crawl out of the woodwork and shower her with praise, adoration, and sparkly drool, and as Hades becomes increasingly moody and horny around her.

This lack of conflict repeatedly irritated me. No one figures out until the very end that Lina's not a Goddess - she conveniently has a magical voice in her head that spits out ready-made infodumps about the weird things she encounters, and she miraculously manages to perform a number of celestial tasks without so much as tripping or breaking a nail. She possesses some unexplained charm over animals as well. Everyone - literally everyone loves her and it was enough to make me want to puke.

As such, the characterization is fairly one-note. Along with Lina, there is Eurydice (yes, the dead bride of Orpheus) - who's turned here into an infantalized, dithering twit who would like nothing more than to don sparkly pink lipgloss and kiss Persephone's ass all day, if the Goddess so commanded it. There is also Iapis, Hades' number-one manservant, who's wise and jovial and - oh, did I mention he approves of Lina? And that Hades' horses like Lina? And Cerberus likes Lina?

Hades is the only one who gets more characterization than the simple "would eat broken glass if it meant Lina'd be happy" personalities of the others. He falls for Lina as hard and fast as the others, but he alone manages to restrain himself because he reasons that the sunny, sparkly Goddess of Spring deserves better than the somber, emo God of the Underworld. Lina tries on at least TWO occasions to jump his immortal bones and he refuses because she deserves better than a quick tumble. Still, most of my goodwill towards him dissolves at the end, when he makes the same bonehead, inexplicable, inexcusable mistake TWICE in the span of a chapter just to add some much needed, but last-minute conflict. Sadly, because it came so late, and without so much as an augmentation of tension for a lead-in, the one time something bad actually happens to Lina it feels as contrived and fake as the rest of the entire novel.

Part of the reason I'm angry is that I'm not new to P.C. Cast's work, nor am I unfamiliar with her unique literary charms. I loved Divine By Mistake and Divine by Choice. Hell, in the latter novel she managed to satisfactorily explain away rape and adultery performed by the novel's good guys, and that's saying something. The protagonists of all three novels are middle-aged women who are zapped into magical worlds where they're treated like royalty, but still get to use their modern-day skills. However, Rhia had to confront some pretty nasty problems and use her inherent smarts and daring to overcome them. Conversely, Lina wasn't challenged by anything. It was all ointment and no fly. I never really got a sense of the strength and goodness that everyone else seemed to see because she never got the opportunity to express such talents under real pressure.

I still have Goddess of Light, unread, on my bookshelf, which deals with the god Apollo (who actually had a couple of funny cameos in this book). While I eventually will get around to reading it, I'm going to wait and let the cloying sweetness of Goddess of Springtime leave my mouth before giving it a go. Meanwhile, Goddess of Springtime gets a C+.

Posted by AnimeJune at Wednesday, October 01, 2008