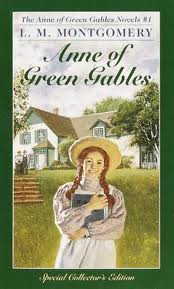 The Protagonist: Anne Shirley. An unloved orphan girl who is finally adopted by a pair of elderly siblings to help on their farm - until she finds out they'd meant to adopt a boy instead.
Her Angst: While they decide to keep her anyways, can Anne overcome her incorrigible upbringing (and equally incorrigible red hair) to make them proud of her?

Matthew Cuthbert: An incredibly shy, tongue-tied farmer who is terrified of social interaction, especially with women and girls. Anne, of course, is the miraculous exception.

Marilla Cuthbert: Matthew's unmarried sister. Initially appalled at receiving a girl instead of the boy they'd asked for, she intends to raise Anne up the proper way - although her idea of what's proper changes drastically the more she learns about Anne.

Gilbert Blythe: A popular boy from Avonlea who earns Anne's undying spite and unwilling fascination when he mocks her hair.


LiveTweeted it! Here on Storify.

The Word: Really, for the first book of my Re-Read Rollout, what other book could I have honestly chosen?

Anne of Green Gables is the story of my life. Not only in the sense that I have always felt Anne to be a kindred spirit (in imagination, intelligence, and the inability to shut up), but in the sense that it is the book that's influenced so much about my outlook on life, literature, and my personal vocation of writing. I honestly cannot remember the first time I read this book (I still have the MacMillan Little Classics edition I was given as a child, along with Heidi - a book which prompted me to try and toast cheese in the microwave), but I don't think there will ever be a time when I do not think about it.

As it is, Anne of Green Gables is a book that holds up just as well to adult reading as it does to childhood reading.

Our story begins when two elderly siblings - rigid old maid Marilla and her reclusive brother Matthew - decide to adopt an orphan boy to help out on their farm, Green Gables. However, when Matthew drives to the train station, he discovers the orphanage sent them a little girl by mistake: a scrawny, red-headed chatterbox named Anne who survived the first eleven years of her life using her wits, her overactive imagination, and precious little else.

In the time it takes to drive back to Green Gables, Matthew (an intensely shy and passive man) is so enchanted by Anne's zeal, enthusiasm and delight that he insists on keeping Anne despite Marilla's consternation. However, even Marilla is not immune to Anne's nattering charm, resulting in five years of episodic, yet wholly entertaining adventures.

I love this book. I love pretty much everything about it. Anne is constantly observing and sharing her observations, and while she helps to create a detailed picture of the community of Avonlea that embraces her, her interpretations of these observations paint a fascinating interior portrait of herself for the benefit of the reader.

Anne is such a perfect character because Lucy Maud Montgomery allowed her to be imperfect. While kind-hearted, intelligent, creative, and honest to the point of oversharing, Anne has significant flaws as well - she's vain, lazy, hot-tempered, self-absorbed, careless, and envious. Anne is developed - her actions are supported by well-established motivations and result in significant consequences that change her as a character. For instance, she's not the smartest girl in school because she's a Mary Sue who has to be because she's the main character. She's the smartest girl in school because she studies her ass off in order to beat out the boy who humiliated her in class. To me, that's way more satisfying than if she'd just been naturally awesome.

One thing I realized on this particular re-read is that the book is about Marilla almost as much as it is about Anne. Every time Marilla reacts to Anne's equally-frequent triumphs and scrapes, we learn more about her character. Anne speaks aloud the things Marilla has always secretly thought, and Anne's scrapes force Marilla to remember her own childhood foibles and romantic entanglements. As a result, Marilla embarks on her own emotional journey as she overcomes her terror of attachment and learns to acknowledge, accept, and finally articulate her love for Anne.

And of course, there is Matthew - the shy, sweet, and secretly brave old man who falls for Anne within the first ten minutes of meeting her. Despite his deep discomfort with confrontation, social interaction, and attention, he manages to intercede on Anne's behalf in his own quiet, stubborn way.

Anne of Green Gables engages both the brain and the heart, which is why it continues to entertain me as an adult reader in a way that, say, Little Women can't. Yes, the deeply sentimental scenes and vignettes are still as powerful as ever, but one can also enjoy Montgomery's wry, witty writing style, excellent sense of setting and pace, and her sly social subtext regarding the role of women in society.

Anne of Green Gables is my true Desert Island book.
A+
Posted by AnimeJune at Wednesday, December 05, 2012

Labels: A Plus Reviews, classic, reread rollout, YA