"The Birth House," by Ami McKay 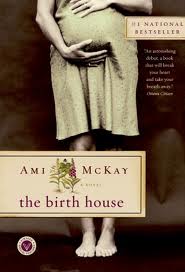 The Protagonist: Dora Rare. When local midwife Miss B asks Dora to help her with her practice, Dora is hesitant to render herself even more of an outcast in her tiny, conservative Nova Scotia town.
Her Angst: Both Miss B's livelihood and the health of the women in Scots Bay are threatened by the arrival of a high-handed, condescending obstetrician who wants to rid the town of midwives for good.

Marie Babineau, a.k.a. "Miss B.": The elderly local midwife. Despite the fact that she's personally caught most of the babies in town for decades, many of the residents superstitiously avoid her - when they don't currently require her services.

Dr. Thomas Gilbert: A condescending, malicious, and misogynist doctor on a mission to mansplain the process of childbirth to everyone he possibly can. Most definitely not related to Anne Shirley's Dr. Gilbert.

Bertine, Sadie, Mabel, and Ginny: The four town women who befriend Dora and support her as she takes over Miss B's practice.

Hart Bigelow: Archer's older brother - shyer and more reserved, he continues to look out for Dora even after she marries Archer.

The Word: I had to read this novel way, way back in university for a Comparative Literature - Women's Studies course, and I enjoyed the novel so much that I held on to it. I always planned to read it again, in a setting where I didn't have a deadline, but I never got around to it - that is, until I read Ami McKay's second book, The Virgin Cure, and was less than thrilled with it.

So, for my ReRead Rollout, I decided to go back and try McKay's debut novel that I'd loved so well to see if it held up as well outside of the classroom. Thankfully, it did!

The Birth House takes place in the early years of the twentieth century, in the tiny little Nova Scotia town of Scots Bay. Our teenaged protagonist, Dora Rare, gets roped into helping the town's midwife, Miss B, who starts teaching her the ways of herb usage and folk medicine as they help the town's expectant mothers. The two are threatened by the arrival of Dr. Thomas Gilbert, a fancy, high-handed obstetrician who opens an expensive maternity home in the area.

Dr. Gilbert is a pretty nasty character who looks down on Miss B's "quackery" and promotes the superiority of male-dominated medicine for childbirth. He markets his services like a product, one that's all the better for being "official" and expensive, and pretty soon many of the oblivious husbands in the area begin to insist their wives have their babies at the maternity home instead of coming to Miss B and Dora for help. Dr. Gilbert's arrival sets off a furious, quiet war between the women and men of Scots Bay.

Part of the reason I enjoyed this novel so much is that it offers powerful, thought-provoking themes along with well-realized characters and human drama. Too many "lit fic" novels let their message take over the story, transforming the characters into passionless ciphers who behave in ways that support the message rather than in recognizable human ways. Here, I felt for all the characters at the same time I was entertained by the novel's central theme.

Dr. Gilbert is very obviously depicted as the novel's villain, and his maternity home is a cold, clinical, impersonal place where babies are "extracted," still wheezing from the chloroform administered to their mothers. This is contrasted sharply with the communal, comforting nature of the homebirths Miss B performs.

Ami McKay takes a risk with this depiction since, in this day and age, hospital births are fairly common. However, she wisely focuses the novel on the gendered aspect of the contrast. It's not so much that obstetricians are worse than midwives - rather, it's about how Dr. Gilbert presumes to enforce how women have children when he clearly has no respect for women, and how that symbolizes the oblivious male attempt to control an event that is innately feminine. Dr. Gilbert repeatedly endangers his patients by mistaking their legitimate fears and concerns for "hysteria" - if he cannot find a scientific explanation on hand for it, then clearly the female is being silly and male science must save the day.

This bleeds over into the general theme of women's reproductive rights as Dora treats a wide spectrum of women - from exhausted women whose husbands want another baby to survivors of repeated sexual abuse. This message is conveyed all the more potently thanks to the vivid characterization and gorgeous writing style told from Dora's point of view as she comes to learn more about the women of Scots Bay.

I enjoyed this novel fully as much as I did the first time. Stellar characterization, excellent historical detail, and pertinent themes wrapped in a rich, evocative writing style. If you're a fan of historical fiction that still maintains a contemporary relevance, look no further than The Birth House.
A

You can purchase The Birth House here.

Posted by AnimeJune at Saturday, December 29, 2012