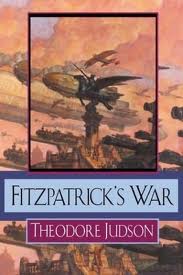 The Protagonist: Sir Robert Mayfair Bruce. A talented young engineer with a knighthood for bravery is delighted to find himself noticed by the powerful and influential Fitzpatrick in his quest for glory.
His Angst: Robert finds his loyalty tested as Fitzpatrick's quest for glory promises to wreak untold devastation on the surrounding nations.

Isaac Prophet Fitzpatrick: A charismatic, brilliant, driven individual who seeks to unite the world under one banner and culture. However, one cannot make a World Domination Omelette without breaking a few tens of millions of eggs.

Charlotte Raft: A possible agent of the mysterious Timermen who falls in love with Robert and decides to be his wife. His beliefs factor very little into her decisions.

Sir Jeremiah Truth Hood: The leader of Fitzpatrick's armies. An upright and religious man, like Robert he also comes to regret his actions committed at his commander's behest.

Pularski, a.k.a. "Buck": Fitzpatrick's hulking bodyguard, who hides a deeply moral soul as well as a talented green thumb. He much prefers tilling beautiful gardens and growing flowers to carrying out Fitzpatrick's murderous orders.

Dr. Murray: A member of the mysterious Timermen society, the only people on the planet who still possess electrical power and outerspace travel. Because of this, they unofficially rule the planet and can easily manipulate any power player to their whims - including Fitzpatrick.

Zimmerman: A nefarious member of Fitzpatrick's secret police force with no capacity for human empathy whatsoever.


The Word: With my ReRead Rollout, it was bound to happen sooner or later - but  Fitzpatrick's War, a novel I read and enjoyed some time ago, did not quite live up to my first experience reading it.

The reason I enjoyed it is still present (in the novel's unconventional formatting), but this time around the cleverness of the narrative framework can no longer disguise how tedious, boring, and repetitive much of the novel is.

The story is a little complicated to describe, but I'll try: Fitzpatrick's War is framed as the personal memoirs of Sir Robert Mayfair Bruce, a soldier in North America circa 2490 A.D., in a nation that has been reduced to a warmongering, steam-powered, Neo-Victorian society in the wake of a global disaster in the 21st century that stripped the world of all electrical power. America, Canada, Australia, Great Britain, and a number of other nations have all united into a mega-nation known as the Yukon Confederacy.

But the story's gimmick is also the fact that this is a "special anniversary edition" of Sir Robert's memoirs that have been edited and annotated by an obsequeious little university professor exactly 100 years later. Sir Robert's memoirs have, since their publication, been deemed a slanderous text, and thus the novel is full of "helpful" (and hilarious) footnotes that explain, elaborate on, and "correct" Robert's treasonous and deceitful allegations.

The reason Robert's writings have been discredited is because he alleges that the legendary national hero Fitzpatrick (of whom Robert was a companion) was not the glorious, noble figure that Official History paints him as, but rather a megalomaniacal tyrant whose actions were manipulated by an insidious secret society.

Still there? Okay - so most of the story involves how Robert, a talented commoner, comes to be included in the inner circle of Isaac Prophet Fitzpatrick, a privileged boy expected to inherit the title of Consul of the Yukon Confederacy. Robert is initially dazzled by Fitzpatrick's attentions and the privileges and promotions this association wins him, but slowly comes to realize that loyalty to Fitzpatrick comes at an ever-higher moral cost.

This is all good stuff, and the personal politics of Fitzpatrick's War are a treat to read (especially when compared to the point of view of the memoir's future editor), but the novel doesn't really have enough of this.

In many ways, Fitzpatrick's War reminded me a lot of Solaris, by Stanislaw Lem. Both authors pay such meticulous attention to their settings, imbuing them with endless detail. The world Judson creates is so complete and detailed - the societies, the geography, the history, the politics, the weapons, the military ideology, and their steam-powered technology.

However, like Solaris, all this detail cuts into the time used to tell the actual story. Despite the unusual and creative setting, the plot of the novel (how one man is completely and utterly corrupted by power) is hardly new and would have suited a much shorter story. In many parts of the novel (most especially during the Yukon Confederacy's assault on the Chinese), the inundation of detail is simply too much. I really didn't need to know exactly how many platoons there were, the descriptions of the different weaponry they carried, and which members carried which guns. In many places Fitzpatrick's War felt like reading a history textbook - lots of detail and information but no narrative. I found myself skimming many passages.

Again, the parts of the novel that involved around actual human interactions and politics were, for the most part, interesting. All the characters had interesting roles to play - however, the one woman in the story (Robert's wife Charlotte) is such an Insufferably Smug Morally Superior Manic Pixie Dream Wife that I just couldn't stand her. It's not that I don't understand her character, and how she was supposed to shock Robert out of his staid ways and get him to embrace open-mindedness, but she could have been dialled down way more, at least if the author wanted us to interpret her as a realistic character rather than a moral-spewing cartoon.

Is this novel terrible? Hardly. It's still well-written with a splendid eye for detail. It's also very interesting to have a novel with two points of view - Robert's and the "Official Historical Account" of the future that aptly demonstrates how official history is written by winners. If you're a fan of military sci-fi, steampunkish settings, and alternate histories, you might very well enjoy Fitzpatrick's War. If you are more a fan of politics and human characters, you should probably look elsewhere.
B
Posted by AnimeJune at Sunday, December 16, 2012