Re-Read Rollout: The Villains of "The Secret Pearl" 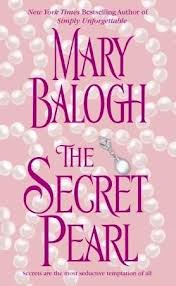 For the second book in my Re-Read Rollout, I chose The Secret Pearl, by Mary Balogh. This was my first novel by her and it immediately cemented me into a serious fan of her work. Not all of her books have been great, and none have managed to impress me as much as this one, but they've all been consistently good. I can always expect thoughtful themes, interesting characters and great atmosphere in her books.

Since I already reviewed this novel, I decided that, for this ReRead, I would focus on a particular aspect of this novel that really grabbed me.

In The Secret Pearl's case, it would have to be the villains. In a genre where villains tend to be as big, loud, and flaming as the protagonists' passions, the antagonists in this novel are so incredibly subtle, fascinating, and even sympathetic.

Lord Thomas Kent is perhaps the least developed of the three - an asshole just for the purpose of being an asshole. When the hero, Adam, went off to fight in Waterloo, he was grievously injured and thought dead for the better part of a year. During that time, Lord Thomas inherited the dukedom - as well as the attentions of Sybil, Adam's intended.

All was well until Adam returned, miraculously alive, rendering Thomas a mere "Lord" again. Although Thomas and Sybil were betrothed by that point, Thomas no longer saw any reason to honour his agreement with Sybil and split for the continent, leaving her pregnant with his child.

In many ways, Thomas isn't really an antagonist. He doesn't really oppose Adam or Fleur in any of their endeavours - the only reason he really returns to the estate is to twist the knife in Adam's back and wrap Sybil around his little finger once again just to see if he can. He's more of a catalyst - his presence heightens emotions in Adam and Sybil and allows Matthew a way into Adam's houseparty.

He also serves as a warped mirror to enhance Adam's heroic nature by comparison. While Thomas and Adam shared a happy childhood together, Adam grew to accept his responsibilities while Thomas continually shirked them. The Thomas-Sybil-Adam triangle brilliantly displays this - while Thomas enjoyed all the pleasures of an affair with Sybil, Adam shouldered all the consequences - namely, a heartbroken, embittered wife and his brother's illegitimate child.

Matthew is next - in many ways, he's a standard villain: a wealthy man with considerable power and influence who is unnaturally obsessed with the one woman who refuses his attentions, to the point of framing her for murder and theft to force her into marrying him. Matthew is an interesting character because he's so calculating, controlled, and devious that the menace in his interactions with Fleur is entirely verbal. He's a nonviolent villain - aside from one forced kiss, his reputation and his power are enough to keep Fleur compliant.

The tension between him and Fleur is even more potent because he never does act on it - the suspense and Fleur's terror of him all derive from the potential of what he can do. Fleur never hits him, physically resists his advances, or runs from him - in her mind, there is no point in doing so. As a justice of the peace, he can chain her in fetters and drag her home whenever he pleases. Therefore, it's a delicious agony to watch their many outwardly civilized and polite dialogues regarding whether she will consent to be his wife or bare her neck for the noose.

However, Sybil's characterization leaves both Matthew and Thomas in the dust. Honestly, she's one of my favourite romance villainesses ever and a highlight of the novel. You hate her at the same time you pity her. She's a victim as much as she is an aggressor - probably even more so. She truly and passionately fell in love with Thomas while Adam was MIA, oblivious to the fact that Thomas saw her merely as an attractive accessory to the dukedom he'd unexpectedly inherited. When he found out she was pregnant, he abandoned her - leaving her forced to marry Adam or face ruin.

Their marriage subsequently curdled into bitter acrimony - in part because Sybil chose to believe Adam purposefully sent Thomas away to keep her for himself, and in part because Adam (in a mistaken attempt to spare Sybil's feelings) decided not to correct that assumption.

Unlike Matthew or Thomas, who are more stereotypically evil, Sybil's antagonism is depicted as the result of moral weakness rather than a conscious choice. As Adam reflects near the end of the book, if Sybil's life had been pleasant or happy, she might have remained a sweet-natured person for all of her life.

Much like Thomas is seen as an evil comparison for Adam, Sybil is a dark reflection of Fleur. Both Fleur and Sybil were dealt monumentally crappy hands by fate. However, while Fleur fought to rise above the tragedy of her circumstances and attain peace of mind regardless of the cost, Sybil chose to wallow in her misery, becoming indolent, selfish, and embittered, carrying on mindless affairs while refusing to let Adam touch her.

Yes, Sybil is a terrible person, but it's hard not to pity her when the foundation of her character lies on such desperate unhappiness. Because of this, she's interesting and memorable. She's a fully-fledged character rather than a mere obstacle, and her conflicts with Adam and Fleur add layers of complexity to an already detailed storyline.

If you are a fan of complex, angsty historical romances or would like to try one of Mary Balogh's novels, I implore you to try The Secret Pearl. You won't regret it.
Posted by AnimeJune at Sunday, December 09, 2012