DNF Review: "Never Lie To A Lady," by Liz Carlyle 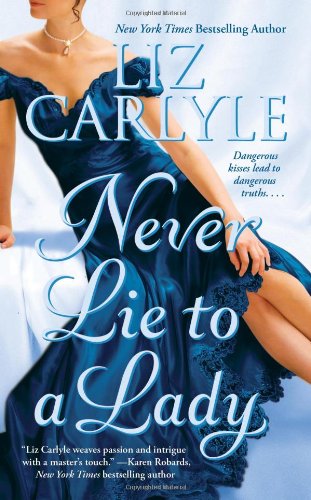 Liz Carlyle has always been a mixed bag for me - some of her books are simply exquisite, others enraged me, still others frustrated and puzzled me.

But none of them have ever bored me until this one - Never Lie To a Lady.

Lord Nash is a Brooding Angsty Alpha Male, who spends most of his free time moping about how He Doesn't Fit In, reminiscing about his moral corruption, and drinking alone in the dark. One night, at a party, he accosts a lady standing outside in the fresh air. The two share a passionate kiss and a fondle before the woman, horrified, turns and flees.

That same woman is the inexplicably-named Xanthia Neville, an enterprising lass newly settled in London after leaving her brother's plantation in Barbados who, thanks to a complicated backstory replete with Dead Parents, Slavery, Sex Addict Brothers and Evil Uncles, now runs a large and successful shipping company. While her ancestry guarantees her entry into the ton, she really has nothing in common with the aristocracy and is only attending the balls and soirees for the benefit of chaperoning her estranged young cousin Louisa at her come-out. She is embarrassed by how easily she fell for Lord Nash's charms and determines never to see or speak to him again.

Then the Major Plot steps in - two government officials approach Xanthia and her brother with a desperate request. It seems as if someone in Britain's aristocracy has been smuggling guns into Greece to support their revolution against the Turks, and the Home Office strongly suspects Lord Nash, who has maternal ties to Russia and Greece and an inherited enmity of the Turks. He also has an absurdly large fortune that comes from seemingly nowhere - normally this wouldn't bother the characters in a thinly-drawn historical but in this case it seems suspicious. They ask Xanthia to approach Nash as a representative of Neville Shipping and see if she can tempt him into asking to use her company to smuggle his guns.

Xanthia agrees - partly because it gives her a chance to see if she can do other things with Nash's guns (wink wink), and partly because she wants to get the intriguing man out of her system and uncovering his penchant for treason could be just the ticket.

I was actually quite surprised to find myself bored with this novel. On the surface, it had everything going for it - an extremely competent and unorthodox heroine, protagonists with incredibly detailed personal lives and connections, a fascinatingly detailed setting and a complex spy plot. Normally, I love these things, and actively seek them in historicals. Many lesser historicals eschew the finer details of the history because all they really want is a nice, nonspecific, but idealized romantic setting for a story that could really work in any time period.

However, romances still do need an emotional core. A meticulously-described setting won't mean anything if I'm not invested enough in the characters to care about the story. For instance, I've never felt that Julia Quinn's historicals were very particular about setting or detail, but the characters' emotional journey kept me reading.  I didn't feel invested in the protagonists of this novel. Xanthia had promise (despite her tendency towards judginess), but Lord Nash just seemed like a blank slate with a lot of Angsty Characteristics tacked on. I couldn't figure out why he felt like such a loner or had to do such mopey sad things.

To the author's credit, I did make it about 200 pages in - because she does create a very detailed and well-realized setting and uses beautiful language and those deserve credit. But by the time I was halfway in, I kept daydreaming instead of reading, and kept thinking of reading something else, and I realized it was time to move on.