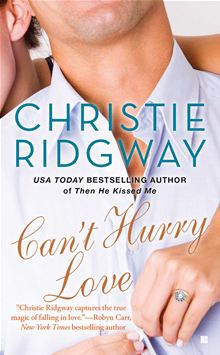 The Chick: Giuliana "Jules" Baci. As head of the family winery business, it's up to her to make the tough decisions for the good of the family, all the while avoiding the former love of her life, Liam Bennett.
The Rub: This last resolution becomes impossible when Liam reveals the details of their secret teenage wedding - which they never broke off.
Dream Casting: Lauren Graham.

The Dude: Liam Bennett. The calm, collected, and responsible Bennett brother,  he discovers Jules' presence in his town after ten years away is driving him crazy. Clearly, he and Jules need to face this tension head on if they want to have any sort of future for themselves.
The Rub: In everything he does, he can't help but compare himself to his selfish, womanizing dad, and wonder if he's turning out just like his old man.
Dream Casting: Ryan Phillipe.

Jules: Oh no! My apartment burned down!

Liam: GREAT! Now you can live with me!

Liam: Really? Even though you never bothered to annul our secret marriage after ten years?

Jules: Fine, I will!

Allie and Stevie: NO!  YOU CAN'T! YOU'LL RUIN OUR PR STUNT ABOUT OUR MAGIC DIVORCE-REPELLANT WINE AND BANKRUPT OUR FAMILY WINERY!

Jules: Whose idea was it to base our winery's entire future on a ridiculous piece of advertising?

Allie: The same people whose idea it was to force Stevie to arrange the wedding of her ex-boyfriend and the woman he cheated on her with!

Jules: Wow, if I stopped to consider these plotlines like a regular person, I'd realize we are pretty terrible, cruel, and selfish sisters. Good thing this UNSTOPPABLE SEXUAL TENSION with Liam takes up all my free time!

Liam: Let me take you down Memory Lane - with my Memory Penis!

Jules: Wow, I missed being bossed around by a man who acts like he always knows better than me, especially in regards to my own sex drive and my platonic dealings with men who are not him! I'm sorry I didn't trust you!

Liam: And I'm sorry I abandoned you after you miscarried our baby because of Daddy Issues I refuse to explain in detail!

Jules: Good enough for me! Let's get back together!

Random Villain: But I haven't threatened your lives yet!

Random Villain: *arrested* Yup. Have a good day, y'all!

The Word: You know, I think one of the most frustrating things is picking up a book by a favourite author and having it be terrible. Not "m'eh," not "below their usual standard," I mean so unbelievably stupid and awful you temporarily forget why you liked their other books in the first place. And while chewing through this book, you feel a little guilty because both you and the author (who gave you ARCs of the entire trilogy) expected you to like it.

And I hated it. Christie Ridgway, you are fabulous and you've written some of my favourite contemporary romances but please don't read this review. This book was not your best.

Or anywhere near. To be honest, the two previous novels in this series (Crush On You and Then He Kissed Me) weren't quite as good as I'd hoped, but they came nowhere near the rushed contrivance of the final novel.

The basis of the trilogy is that three sisters - Jules, Stevie and Allie - have given themselves a year to save their family Napa Valley winery after discovering on their father's deathbed that he ran it into the ground with mismanagement. In the first novel, the youngest sister Allie suggested turning the winery into a wedding destination in order to boost profits, and so far it's going relatively well. While their finances are still terribly shaky, they have more of a leg to stand on than they did a year ago.

You Can't Hurry Love deals with the final, oldest Baci sister, Jules (short for Giuliana), right after her apartment goes up in flames, along with most of her possessions. She and her assistant/temporary roommate Grace (who just got out of an abusive marriage) now have nowhere to live and Jules realizes that shacking up in the family farmhouse with her happily-married Prequel Bait sisters is not an option. Things get even worse when Liam Bennett shows up and offers assistance.

And, because Liam turns out to be a Manipulative Asshole, he forces Jules' hand by revealing their Dark Secret - they secretly married ten years ago and never bothered to get a divorce. Worse - when they married, they toasted each other with the Tanti Baci Winery's blanc de blancs. What's that? Oh, it's a Cutesy Magical Wedding Wine (for reals) and Jules' sisters have discovered that no couple in the last fifty years who toasted their marriage with that wine has gotten a divorce.

Against Jules' wishes, they've pimped that romantic legend all over town as PR for their winery so of course Jules and Liam cannot get a divorce now, or at least not until after Tanti Baci's Poorly-Explained Mass Wedding Stunt at the end of June. And - obviously - they also need to pretend to be happily married until then. Think of the winery!

Of course. That all makes sense! Just like how two people who hate each other and want nothing more to do with each other somehow never bothered to divorce in TEN YEARS.

The sheer contrivance of everything in this novel is my biggest beef - nothing happens organically in this story. Everything occurs randomly! Or by surprise! Or because the hero or heroine weren't paying attention despite how completely out of character that would be! Or just because! Every plot development smacks of authorial intent to create a specific situation or reaction, instead of letting it emerge from the characters' motivations and decisions.

Liam's getting too close to Jules too quickly? Let's bring in two Random Characters who we haven't met before and won't see again who Oh-So-Conveniently happen to know Liam's Dad's Dark Secret and choose that exact moment to drop that bombshell in Liam's lap.

Jules is afraid of emotional connection after enduring a broken marriage and miscarriage? Drop in a Random  Character with no previous presence in the trilogy who just gives Jules her Random Baby to look after so that the infant's "strangely wise" face can reawaken Jules' maternal instincts.

You've created this running mystery of a hidden Tanti Baci treasure and you need it found by the third book? Just give the secondary romance heroine an out-of-the-blue psychic power and have her find this rare, sought-after plot device in under a minute.

Need a bit of action and suspense to force Jules and Liam back together all the more? Let's bring in Grace's Abusive Husband and have him openly approach and introduce himself to the protagonists, and let's have the protagonists not freak out or call the police or tell Grace despite the fact that Grace has been Jules' roommate for months. That way we have a nice Quickie Villain on hand.

On top of the utter falseness of the plotting, we have two Prequel-Baiting Couples who bloat the storyline with their utterly unnecessary and obnoxiously saccharine Wedded Bliss whenever they're not acting like Meddling Matchmakers, two tropes I absolutely despise.

Plot contrivance and annoying tropes aside, I just plain didn't like the hero and heroine or their romantic dynamic. Liam is controlling and patronizing and spends the majority of the novel bossing Jules around because Daddy Knows Best. He's also extremely jealous and possessive, to the point where he punches another man in the face (secondary romance hero Kohl Friday) just for having his hand platonically on Jules' arm. I found this particularly unsettling since the secondary romance heroine is a victim of domestic violence. So when her husband gets uncontrollably angry at her and resorts to force, it's horrible and a crime. But if the hero gets uncontrollably angry at Jules and resorts to force - it's heroic and primal. Excuse me?

The relationship doesn't look any more appealing from Jules' POV. Despite Liam only being two years older than her, she describes their initial teenage courtship with a creepy teacher-student vibe. Disturbingly, she recounts how often she "threw herself" at Liam with the full force of teenage passion, only for "patient, tender" Liam to "tame" her wild ardour. In fact, she reveals the reason they finally eloped to Tuscany at eighteen was so that they could finally have sex! Because Patient, Tender, Daddy Knows Best Liam knows that sex should be reserved until after marriage!

Spare yourself the brainache and avoid this stinker.
D
Posted by AnimeJune at Sunday, February 17, 2013