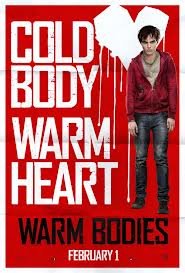 So, despite some misgivings (such as with the whitewashing of a secondary character), I went and saw Warm Bodies at the theatre on Friday, and found I was pleasantly surprised.

Warm Bodies is the rare instance of a film adaptation being better than the book. It's far more cohesive, establishes the same general plot points quicker and more effectively, and moves along at a faster, funnier pace.

It does softball some of the book's elements and themes and works with a far more optimistic tone, but I found I preferred that. It made the Redemption-With-The-Power-Of-Love solution at least look more probable than it seemed in the novel.

The general story is still the same - R (Nicholas Hoult, borrowing some of Edward Scissorhands' gruesome-cute awkwardness) is a zombie who falls in love with a human girl named Julie (played by Teresa Palmer) after he eats her boyfriends' brain and absorbs some of his memories. He rescues Julie and in the process, awakens a reaction that starts bringing him back to life - and other zombies, too.

And, like in the novel, R and Julie's quest to cure the zombies is opposed by Julie's totalitarian father (John Malkovich) and the Boneys - zombies-skeletons who have atrophied to the point of shedding their skin and their humanity at the same time.

The Main Character
I found I enjoyed the film-R much more than the novel-R. The Film Version of R is skewed more towards a younger, teen audience. He shuffles around in a hoodie and listens to 80s indie rock while his  novel counterpart wears a suit and tie and prefers Frank Sinatra. The Film portrays R as a zombified college student, while the Novel suggests R was a young, successful professional in a former life. Even as a zombie, Novel-R is more of an adult - he even has a "wife" and "kids" in the zombie society.

Film-R is also on his own, epiphany-wise, while the Novel-R is frequently visited by the spirit of Perry, the boy he killed whose brains were full of juicy Julie memories. Novel-R and Perry have a lot of dream-like discussions and Perry even helps him out of a few jams. Perry's role in the film is sadly relegated to flashbacks and was the one element of the story I was genuinely sorry to lose in the adaptation.

Neither of these interpretations is better or worse, but Film-R is funnier. Like Novel-R, Film-R has a running inner monologue that is far more intelligent and articulate than he has the power to convey to others. However, while Novel-R was a dreary, navel-gazing sad-sack who spent a lot of words Thinking Deep Thoughts about the nature of Life, the Universe and Everything, Film-R is way more of a smart-ass. He still considers the same themes, but in a more succinct and entertaining way - but, to be fair, he's also supported by a visual medium that helps impart the themes of aimlessness and mediocrity in a more immediate, symbolic fashion.

In the novel, the Boneys were inhuman skeletons who had abandoned their humanity, but they were also capable of higher thought and reasoning - their reasoning was just wholly focused on maintaining the status quo, regardless of the cost. The Boneys in the novel actually functioned as the Elders of the zombie "society" - even going so far as to perform primitive marriage ceremonies. Their opposition towards R and Julie's quest was symbolic: the zombies symbolize tradition, stagnation, and hopelessness, and R's quest threatened that sameness with the power of change.

In the film, the Boneys are just mindless monsters who will attack literally anything with a heartbeat. Therefore, their opposition to R and Julie's quest comes from the fact that zombies who start undergoing a positive change thanks to R and Julie start looking like prey to the Boneys.

Yes, some of the more sophisticated symbolism in the novel was lost in the film adaptation of the Boneys, but they did maintain their basic narrative function - they served as examples of humans who had relinquished their humanity. By reconnecting with humanity, R and his friends are able to regain it. By abandoning their humanity, zombies become gruesome feeding skeletons impervious to change.

However, General Grigio undergoes the biggest change in the adaptation. In the novel, the General is single-minded, emotionless, ruthless, and has dedicated his life to protecting humanity at any cost - even though he doesn't believe humanity is even worth the effort anymore. He isn't just an antagonist, he is a villain. By the climax of the novel, he is revealed to be insane - and threatens to shoot his own daughter after she and R present proof of the zombie cure.

In the novel's most effective use of symbolic imagery, at the end of the novel he's bitten by a zombie and immediately turns into a Boney (a process that normally takes a zombie much longer) - revealing that he was no different from the worst of the zombie horde - he was already living a life without hope or humanity.

In the film, well, he's softened up quite a bit. He's still an antagonist, but it comes from a much more emotional place. He doesn't want to believe in the zombie change - but not because he ultimately doesn't believe in change, but because he's afraid to lose what he loves most by risking it. By the end of the film, his daughter finally convinces him that change and hope are both possible and he stands down, reconciling with his daughter. This is a pretty significant change in character, and I honestly wondered why they went in that direction. It reminded me a lot of the change they put Skeeter's mother through in the film adaptation of The Help - where she went from a racist, unhappy nitpicker to a happy, supportive nitpicker.

I think perhaps this ties in to the film's overall attempt to aim for a younger audience than the book - it portrays R and Julie more as teenagers than as young twentysomethings, and it also promotes the ultimately beneficial support of parents by humanizing the General and jettisoning the original ending where he tries to kill his own daughter.

The Love Interest
Julie, out of all the film's characters, hews the closest to her Novel counterpart. A lot of her dialogue is word-for-word from the novel. However, this works as both a blessing and a curse. For instance, her interactions with her father are very similar to the scenes in the novel - she believes the war to protect humanity has ultimately stripped her father of his essential humanity. However, her father is portrayed as far more reasonable in the movie, so Julie's treatment of him seems overblown and childish.

Sure, some parts of the film seemed abbreviated and certain things didn't make sense. But ultimately? I really enjoyed Warm Bodies the film - it was efficient, enjoyable, and thoughtful without being completely bleak or pretentious. As a result, it was a little more shallow, but that's not always a bad thing.
B+
Posted by AnimeJune at Monday, February 04, 2013

Labels: B Plus Reviews, Fantasy, Movies