"To Catch a Bride," by Anne Gracie 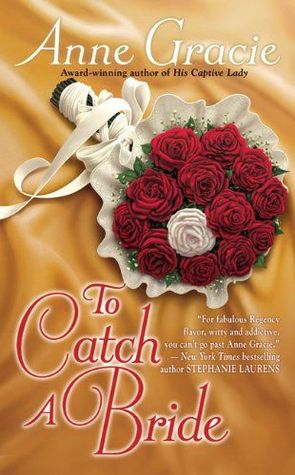 The Chick: Ayisha Machabeli Cleeve. After living on the streets of Cairo for six years before being found by the hero, she should jump at the chance to go to England and live in comfort as the long-lost granddaughter of Lady Cleeve. Shouldn't she?
The Rub: She's actually Lady Cleeve's illegitimate granddaughter - the legitimate one legitimately died years ago.
Dream Casting: Jennifer Lawrence.

The Dude: Lord Rafe Ramsey. When he learns just how unimportant he is in his brother's plans for the earldom's succession, he decides to fly off on a wild goose chase to find a long-lost aristocrat's daughter.
The Rub: Once he finds her, he starts imagining he might actually have a future with her - but will she take a reckless layabout like him?
Dream Casting: Matt Bomer.

Hero's Brother: Hey, hurry up and father my children with this special lady I handpicked for you so that my barren wife and I can take them away from you and raise them ourselves!

Rafe: Oh, yeah, I would, except it's five minutes to Run Away to Egypt o'Clock. *flees*

Ayisha: Oh no, an Englishman's showing an old picture of me! Better steal it back! *is caught*

Rafe: Yay! Come to England with me!

Rafe: But we have cookies! ...and no thugs who are still hunting you in order to sell you into white slavery.

Ayisha: Okay, deal. Let's just get on this boat with no more drama, shall we?

Rafe: Crap! I've got the plague!

Ayisha: *nurses back to health*

Ayisha and Rafe: *murder a huge-ass amount of pirates*

Rafe: Crap! Your grandma found out you're the daughter of her son's slave-mistress and she doesn't want you anymore!

The Word: To Catch a Bride starts out on a strong, if slightly contrived note - our hero, Rafe Ramsey, is the younger brother to the Earl of Axebridge. After ten years of marriage, his brother has been unable to sire an heir, and so Rafe is expected to settle, marry, and perform that task for him. Instead, Rafe decides to embark on a Random Quest on behalf of one of his Granny's old friends rather than face his impending responsibilities.

The quest is this: years ago, old Lady Cleeve's son hied off to Egypt with his wife and daughter, where they apparently all died of plague. However, evidence (and a sketch of a young girl) has surfaced indicating that his young daughter Alicia might still be alive somewhere. Rafe's mission, should he choose to accept it, is to head to Cairo and find this girl - who hopefully hasn't been sold into slavery yet.

The good news is, the girl in the picture, who goes by the name Ayisha, is not a slave. The bad news? She's had to live on the streets for six years and has a much-deserved yearly subscription of Trust Issues to show for it. When her parents both died of plague when she was thirteen, opportunistic robbers broke into their house in order to find Ayisha and sell her on the slave market. She's spent the past six years disguised as a boy in order to hide from them - and, okay, so while I don't really understand why the same street thugs would keep looking for One Random White Girl for six years, I do get how living as a boy on the streets of 19th-century Cairo was probably safer than doing it Single Lady-style.

Rafe and Ayisha eventually meet - but neither is what the other expects. To Ayisha's surprise, Rafe is not a vulgar white slaver looking to buy and sell flesh. To Rafe's befuddlement, Ayisha refuses to come to England with him, even when he promises that nothing but wealth and comfort and a loving grandmother await her.

When Ayisha's true gender comes to light - and the thugs who've (inexplicably) hunted her for six years discover who she is, she has no choice but to accompany Rafe to England, even though she's still hiding a secret that could destroy her future and her budding relationship with Rafe.

As I've said, the novel starts out strong. Ayisha's no fool - she's an excellent tough heroine with a strong practical streak, and Rafe's interesting enough despite his questionable motivations at the beginning of the novel. Sadly, most of this goodness leaches away as the book progresses.

The story sails away from everything that's unique about it around the same time Rafe and Ayisha's boat sails away from Cairo. Gone are the interesting side characters like street-thief Ali and lusty surrogate mother Laila. Gone are the interesting gender and character dynamics. Rafe settles into the Unintentionally Insulting Male Who Doesn't Understand Why He Needs To Express His Feelings role like he was born to it, and street-smart, cynical Ayisha morphs into the Ever So Slightly Unconventional But Giggly Innocent Who Is Loved By All heroine without so much as a whimper of protest. And of course we have to have a Relationship-Aiding Kitten and some Snooty British People to make this as blandly similar to every other historical romance as we can possibly make it.

To Catch a Bride isn't terrible, but it isn't terribly interesting, either. The hero and heroine aren't particularly memorable and their adventures leave little impact. There aren't any real villains with understandable motivations. Everything seems rote and predetermined - sure, romance novels follow a formula, but the best writers can work with the formula's strengths by employing strong characterization, sharp dialogue, and evocative writing to ensure that even though the destination is a foregone conclusion, the journey is still entertaining.

And, well, the only things that really stand out in this story are the troubling depictions of barren women. There are two infertile characters in this novel - Ayisha's surrogate mother Laila whose husband divorced her for barrenness, and Rafe's sister-in-law who has been unable to produce an heir to the earldom in ten years.

Laila is actually quite an interesting character at first - an open and earthy woman who misses a "good man between her thighs" and deals with her childlessness by taking in stray orphans and generally being a decent person to everybody. She eventually marries an Englishman who's "gone native," and it's lovely - until you find out a few years later she - supposedly just by magic - had three kids with him, including twins. This bothers me for a number of reasons - mainly because, early on in the book, she's portrayed as a character who has made her own destiny and built her own family from the people she cares for. Magically giving her biological children at the end of the novel promotes the very troubling idea that adopted and foster children are somehow just not perfect enough for the HEA - no, she has to have "real" children and then her life is rainbows and cherries!

Similarly, Rafe's sister-in-law is depicted as so desperate for a child that she almost tried kidnapping a village baby, so her husband "got worried." It was at his wife's urging that he made the bargain with Rafe's prospective fiancee that any children of their marriage would be turned over to him and his wife. The novel also places an unnecessary and frankly offensive focus on how plain and "horsefaced" the earl's wife is, with the hero referring to her as "horsey" more than once. Why did the novel have to call attention to her physical looks and emphasize how plain she was? To me, it seemed like an attempt to show just how much a "failure" she was as a woman - unable to have kids and ugly to boot - and how "amazing" the earl was for continuing to remain loyal to such an incomplete picture of femininity.

These final scenes left a bad taste in my mouth, with the idea that children (that is, biological children) are so fundamental to a woman's mental health and happiness that one cannot have a true HEA without them and their lack can lead to immoral decisions.

Despite the strong start, original setting, and (initially) original heroine, this novel doesn't quite measure up.
C
Posted by AnimeJune at Wednesday, February 27, 2013