Film Review: "42: The True Story of an American Legend" 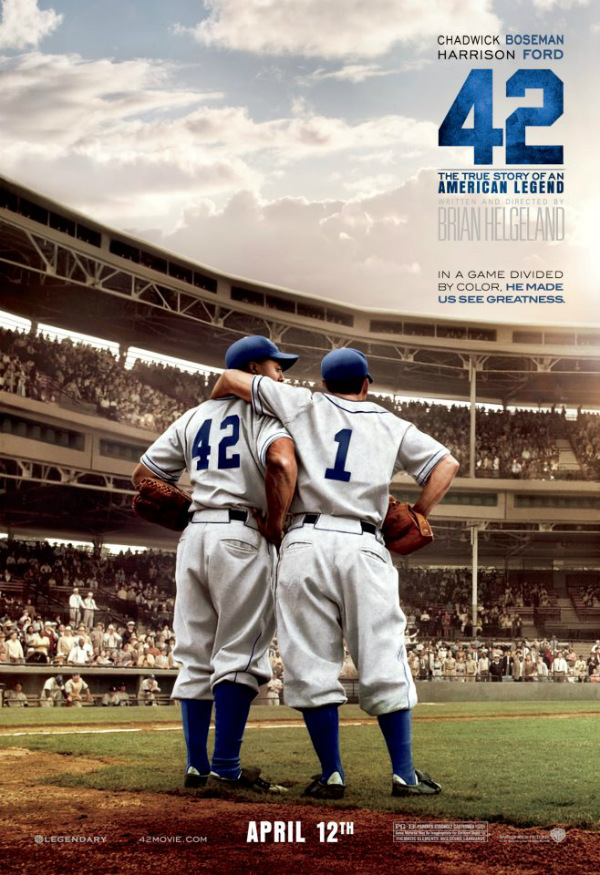 Baseball is my all-time favourite sport. My friends like hockey. My parents and sister like football (the actual kind you use your foot with, in Europe). But me, I love baseball.

I should probably be clear - I don't watch baseball. I don't have a favourite team. I don't follow the stats and couldn't name you a famous player beyond Babe Ruth, Jackie Robinson, and Sammy Sosa.

Nah, baseball is my favourite sport because baseball inspires my absolute favourite type of sports movies. Don't bother me with your Mighty Ducks or your Rudys or your Wimbledon.

Give me The Sandlot, Angels in the Outfield, Rookie of the Year, A League of Their Own, Field of Dreams.

You can keep Moneyball, though. Yeah, let's make a movie about baseball! Only we'll take out all the baseball scenes and just show people arguing about MATH. Brilliant!

There's just something about baseball. The hats and the hotdogs and the peculiar limitations of the game that allow each player to face an entire opposing team on their own as the lone heroic batter, as well as coordinate as a group when working defensively. It's the American Dream, where the game lets you be an individual as well as part of a team.

These aspects of the game help structure the plot of 42, the Jackie Robinson biopic that came out last week. Jackie Robinson (played to perfection by an electric Chadwick Boseman), is hired by Branch Rickey (Harrison Ford) to eventually play for the Brooklyn Dodgers as the first African-American in major league baseball.

At first, he stands alone at the plate. Half his teammates don't want to play with him and the other half worry that the constant racism he's subjected to will make him an emotional liability. And through it all, Jackie has to endure it silently. From the very beginning he's expected to serve as an example for all potential African-American athletes - any fighting back on his part would only serve to demonstrate that Negro players are unstable, violent, and unfit for major league sports.

However, Robinson is a talented player - he bats .625 and steals bases from under the noses of gimlet-eyed, bigotted pitchers with the rakish grin of Robin Hood. Robinson spends the first half the film proving himself as an individual player - then spends the second half proving he's part of the team, as his teammates start to respect, defend, and play alongside him - or else get traded to Pittsburgh if they fall short of the mark on the moral yardstick.

Chadwick Boseman carries this movie on his shoulders and he makes it look easy, which is a good thing, because the second most important character in this film is also the film's greatest liability. Harrison Ford, defiantly mumbling every line after gargling it in the wad of phlegm in his throat, portrays Rickey without an ounce of subtlety. He's there to wield that Moral Yardstick and rap it against as many racist knuckles as possible while regurgitating Bible quotes and inspirational slogans. His performance is jowly - does that make sense? As if he has more physical old-man jowls around his face than he actually does. He utters every line with an expression that indicates you're expected to hear authoritative folds of aging flesh softly slapping together in agreement or wobbling with fury. Unfortunately, with Ford, it only makes him sound like he's perpetually choking on a chicken bone.

The baseball scenes are excellently paced and shot, and the supporting players (particularly Nicole Beharie as Jackie's wife Rachel and Alan Tudyk as Uber-Racist Phillies manager Ben Chapman) perform admirably. However, the tone of the film too closely follows Harrison Ford's performance - there are several moments where the too-obvious emotional manipulation reveals the man behind the curtain trying to pluck at my heartstrings.

At least two child actors are called in to demonstrate How Our Actions Influence The Next Generation and a dogged string and clarinet section are quick to interject with This Scene Has Historical Significance music. I dislike it when a movie pulls me out of the experience by making it too obvious why its particular pieces and scenes are arranged a certain way. We get it, Racism is Bad, but movies are meant to be magic - we don't want to see the hand inside the puppet or the strings on the flying saucers.

42 is still a brightly shot, well-paced movie with crackerjack sports scenes, a solid supporting cast, and a charismatic lead. If you can tolerate some over the top moralizing, Ford's masticated line reads, and some overt emotional manipulation, you're in for a pleasant trip to the ballpark.
B
Posted by AnimeJune at Saturday, April 20, 2013