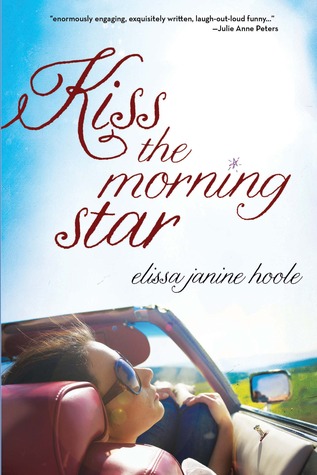 The Protagonist: Anna. It's the summer after her graduation, and her best friend Katy convinces Anna to go on an epic Jack Kerouac-inspired roadtrip in an effort to restore their friendship and their faith.
Her Angst: Anna's still recovering from her mother's death, she worries about leaving her grief-stricken father alone, and wonders what it means if her feelings for Katy go beyond mere best-friendship.

Katy: Anna's best friend, with whom she's trying to reconnect after distancing herself out of grief.

Pastor Shepherd: A zealous and slightly over-the-top pastor who encounters Katy and Anna on their roadtrip.

Seth: A cute member of a travelling rock band who Anna develops feelings for - but are they stronger feelings than the ones she feels for Katy?


The Word: Although it's been a year since her mother died in a tragic house fire, our protagonist, Anna, is still caught in a choking, listless depression. The fire not only killed her mother, but it destroyed her home, her family's church, the vocation of her preacher father, and her own faith in God. She's been living more or less in a fog until the summer after graduation, when her best friend Katy convinces her to take a road trip with her, based on the Rucksack Revolution epitomized by Jack Kerouac in his novel, The Dharma Bums. As an afterthought, Katy adds another goal to their trip - to rediscover proof of God's love.

The vast majority of things that could go wrong on this trip, do go wrong, and Anna spends most of the book Freaking Out Over Everything. But that's essentially the novel's point - Anna needs to Freak Out, to wake up, to rejoin the land of the living. Through this, she reevaluates her priorities, her faith, and her growing feelings for Katy.

Katy strays pretty close to Manic Pixie Dream Girl territory as the unconventional BFF who has to poke and prod and pester Anna into trying new things (drugs! Tattoos!), but the novel allows her to be selfish, wildly irresponsible, and more than a little nuts. She's not Anna's guardian angel - she's there to protect and look out for Anna, but Anna comes to remember that she's supposed to protect and look out for Katy, too.

Kiss the Morning Star is a slim yet potent novel. Using exquisitely-chosen language, the author balances the novel's themes (Kerouac and religion) in a subtle and extremely effective way. The influence of Dharma Bums affects the narrative through how the characters interact with the text,  but not in such a way that excludes those people (like me) who've never read a word of Kerouac.

The religious aspect of Kiss is just as effectively handled. At the beginning of the novel, Anna has rejected the religion she was brought up in. There is no road-to-Damascas moment. Anna doesn't end the book singing in the church on Sunday. Rather, the novel demonstrates that Anna's problem isn't her refusal to believe in God, but her refusal to believe in anything, for fear of having it taken away. The novel examines how Anna softens, not towards her former faith, but towards the idea of faith, in a way that demonstrates the power of God's love while side-stepping the requisite preachiness.

That being said, the novel is not without flaws. The pacing of the novel can be clunky - the ending, in particular, felt uncertain and abbreviated and left some pretty important threads dangling. I also wished we had seen more of Anna's dad - he wasn't much of a character until the very end and then as quickly as he develops importance, he's written off. But all in all, Kiss the Morning Star is a beautifully-written and entertaining examination of grief, faith, friendship, and love.
A-
Posted by AnimeJune at Wednesday, April 10, 2013