"The Lies of Locke Lamora," by Scott Lynch 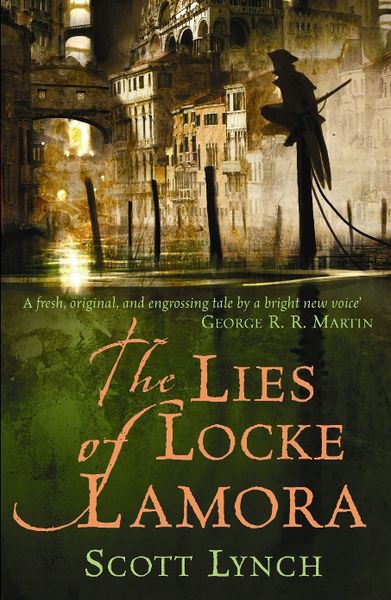 Locke Lamora: An orphan with a mysterious past, he possesses a brilliant intelligence and a near-supernatural ability to cause mischief. Now the leader of the Gentlemen Bastards, he uses his skills to fleece the aristocracy of their misused wealth.

Jean Tannen: The son of wealthy merchants who perished in a fire, he was recruited into the Gentlemen Bastards for his prodigious, instinctive fighting ability. Now Locke's right-hand man, he fights for the Bastards with a pair of hand-axes known as the Wicked Sisters.

Calo and Galdo Sanza: Twin brothers who serve as wingmen in Locke's schemes. Recruited by Father Chains, they helped train Locke and Jean in the ways of the Bastards.

Bug: The Gentlemen Bastards' current apprentice, recruited by Locke. What he lacks in impulse control he makes up for in resourcefulness.

Father Chains: A priest of the (possibly heretical) god of thieves - and the founder of the Gentlemen Bastards. He recruits orphans with special talent to train and educate them to be the best thieves the world has ever known.

Don and Dona Salvara: An immensely rich aristocratic couple who are targeted by the Gentlemen Bastards for their con game.

Capa Barsavi: Camorr's King of Thieves. He united all of Camorr's criminals under one banner and established the Secret Peace with the city's Duke: so long as no one robs the aristocracy or the Duke's law enforcement, the Capa and his thieves are free to pilfer from the merchant and middle classes beneath the Duke's blind eye and lax hand. Of course, this means Locke and his Bastards have to be especially careful the Capa never finds out about their plots.

The Grey King: A mysterious figure with possibly magical powers who has returned to wreak vengeance upon Capa Barsavi for an unknown insult - and he's willing to use force to obtain Locke's assistance.


The Word: What I particularly loved about reading Lies of Locke Lamora is that it uses traditional high fantasy storytelling (which I already enjoy) to tell an unorthodox tale in a slightly skewed setting. Camorr, the city-state that Locke and his clan call home, is not based on Medieval England, but rather Venice - with its canals and its slums and its beautiful spires.

Moreover, this novel has no quests to complete or powerful magical artefacts to obtain or epic wars to fight. Instead, The Lies of Locke Lamora uses repeated flashbacks and character detail to create the story of a brilliant con.

Locke Lamora and his gang, the Gentlemen Bastards, are the best con artists Camorr has ever seen but is too embarrassed to speak of. They are so good, they repeatedly steal enormous sums from wealthy nobles despite a Secret Peace between the authorities and the Capa (king of thieves) that forbids them from robbing the aristocracy. As well, they also have to convince the Capa and their fellow gangs that they are just a humble street band that can barely steal enough to make ends meet.

At the beginning of the novel, Locke and his conspirators set out to cheat a wealthy aristocratic couple out of tens of thousands of gold crowns with an intricately-constructed lie involving foreign wars, expensive brandy, and a lucrative smuggling operation. Locke's plans are knocked awry when the Grey King, a mysterious interloper with powerful magic and designs upon the current Capa's position, decides to "recruit" Locke into his own schemes, consent-optional. Somehow, Locke has to balance his obligations to his Capa, keep the Grey King at bay, and maintain his current con without getting caught or killed.

On top of all that, Lynch braids the present drama with frequent and in-depth flashbacks into the Gentlemen Bastards' origins - how these orphaned children became, with the help of a resourceful and duplicitous priest, the cleverest, best educated, most experienced, and luckiest band of ne'er-do-wells Camorr has ever seen.

The Lies of Locke Lamora is pure pleasure from beginning to end. You want your doorstopper fantasy with amazingly detailed settings and cultures? You've got it - and all of it conveyed organically (and addictively) through the story itself instead of in infodumps. You want your fiendishly clever Oceans 11-style con artist adventures? It's all here - disguises, set-ups, fake accents, misdirection and gloriously improvised malarkey. You want your detailed, damaged characters with intricate backstories? Done - the story breaks for several interludes into the characters' pasts as they learn their trade, and each interlude always carries some relevance to the larger story so that it never feels like it's distracting from the main narrative. Witty dialogue? In spades - as long you don't mind it heavily-laced with expletives (which I don't!).

The Lies of Locke Lamora is an enormous novel, bursting at the seams with detail and dialogue and adventure. While it can take a while to work up to the actual plot line, much like how I felt about the similarly-doorstop-sized Diviners, not a single page feels wasted.
A+
Posted by AnimeJune at Saturday, April 27, 2013