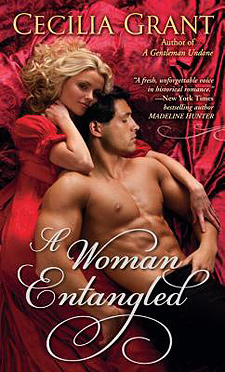 The Chick: Kate Westbrook. The product of a love match between the son of an earl and an actress, she's lived between two worlds, welcome in neither. She's determined to make a splendid marriage in order to improve circumstances for her siblings.
The Rub: Despite catching the eye of a newly-minted baron, she still has unresolved feelings for barrister Nicholas Blackshear.
Dream Casting: Kimberley Nixon.

The Dude: Nick Blackshear. A barrister with political ambitions who hopes to develop the proper social connections to improve his career.
The Rub: Three years ago, he tried to propose to Kate but was rejected due to his lowly status. Now, a scandal in his own family makes any renewal of affection impossible.
Dream Casting: Tom Hiddleston.

Kate: I wish I was a genteel, upperclass aristocrat! Too bad my family's embarrassing and my mother's an actress!

Nick: I wish I was a powerful, successful politician! Too bad my brother ruined my family's reputation by marrying a prostitute!

Snooty Relative: ...so we can help you get work as a servant!

Kate's Father: Hey Nick, my daughter is taking initiative and trying to determine her own future - clearly a terrible decision! Watch over her! And, if possible, be SUPER JUDGY ABOUT IT!

Nick: Can I continue to have small misunderstandings about her motivations and behaviour?

Kate's Father: All the better!

Kate: This can never happen again, for obvious reasons.

Kate: Welp, guess we have to have full-on sex now.

Nick: Good enough for me!

Nick: Can we get together now?

Kate: Another chapter of angst first.


The Word: Few things in life are constant, and those that are, are mostly unpleasant. Taxes. Death. The death of your favourite Game of Thrones character. And the fact that once in a while, a favourite author will write a dud.

Mary Balogh had A Matter of Class. Laura Kinsale had Seize the Fire.

And, it seems, Cecilia Grant has A Woman Entangled.

I should probably clarify right now - A Woman Entangled, Grant's third book in her Blackshear series, is not nearly as terrible as Matter of Class or Seize the Fire. As a romance in itself, it's pretty average. But when compared to Cecilia Grant's magnificent A Lady Awakened and A Gentleman Undone, it's a disappointment.

All the more disappointing because it starts off with such promising themes. Our heroine, Kate, has always yearned for the upper-class drawing-room lifestyle her aristocrat father was born into but cast out of when he married an actress. While her parents' marriage was a love match, their children have reaped the consequences of reduced prospects, social snubs, and sneering looks.

Kate has worked for years to cultivate the manners, appearance, and reputation of an upper-class girl in the hopes of making a splendid match and raising her family back into respectability. When her latest attempt to communicate with her father's family unexpectedly receives a positive response, Kate's determined to use this newfound connection to secure her future and reconcile her father with his family.

However, her father, now a barrister, worries that Kate will be taken advantage of and asks Nicholas Blackshear, a colleague and family friend, to watch over her while she attends society functions. Nick, like Kate, has been struggling to restore his family's honour - ever since his younger brother married a hooker, Nick's reputation, his legal practice, and his political ambitions took a nosedive. He hasn't spoken to his brother since.

Unfortunately, Nick has been in love with Kate for years but has kept his feelings on the back burner ever since Kate spurned his proposal and made it clear she would never marry below a baron. Awkward.

A Woman Entangled has a great idea - romance is full of socially mismatched protagonists who seemingly don't care what society thinks of them. Dukes and milkmaids. Counts and courtesans. But the stories never proceed far enough past the epilogue to examine the consequences their pairing has on their children and family. Here, the hero's current obstacles stem directly from his brother's HEA, and the heroine has to reconcile her desire for an upperclass life with her love for her actress mother and eccentric siblings - who would never be welcome in that environment.

Despite this great idea, A Woman Entangled has little in the way of actual plot or conflict. Kate and Nick are clearly still attracted to each other, and their increased proximity leads to a passionate kiss - and the rest of the book is spent angsting, bickering and internal-monologuing over this one event and whether or not it will damage their friendship and future prospects.

When I think about it, none of the characters really do anything in this book - they spend most of their time overthinking and whining about their problems. Kate, despite apparently spending years attempting to revive her family's reputation, does little more than look pretty and be extremely polite. Her predecessors were willing to create a fake heir and use complicated mathematical tricks to achieve their goals, so I expected a more detailed plan of action from Kate than "smile demurely at anyone with a title until they offer marriage." Her motivations and goals - and thus, the story itself - seemed half-baked, with no particularly strong focus or structure.

Add to that the fact that the hero is a bit of a hypocrite (he's doing to his brother what Kate's paternal relatives did to her entire family), the protagonists share no chemistry, and the novel's theme seems to be about settling for less and getting used to disappointment when your dream proves impossible. Cecilia Grant's expressive writing style is as lovely as always, but it cannot redeem a tedious, unstructured story.
B-
Posted by AnimeJune at Saturday, May 25, 2013