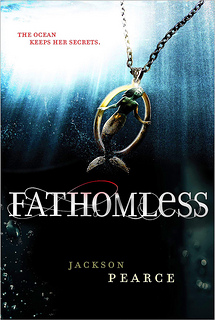 The Protagonist: Celia. One of three triplets with psychic powers, she finally discovers her ability to see into a person's past might be useful when she discovers she can help a mysterious ocean girl regain her memories.
Her Angst: Can she possibly keep the ocean girl a secret from both her psychic sisters and the cute boy who thinks she rescued him from drowning?

The Other Protagonist: Lo. An underwater creature who lives in a sunken ship with her sisters, slowly losing her memories of being human, day by day.
Her Angst: She wants a different life than this - but what if getting it means losing her identity?

The Other, Other Protagonist: Naida. A human girl who was torn from her home, stripped of her memory, and transformed into an ocean girl named Lo.
Her Angst: How far will she go to regain her old life?

Jane: Celia's other sister. Can see the present by reading people's thoughts.

Jude: An adorable musician who almost drowned until Lo saved him, although he thinks Celia did it.

Key: Lo's best friend under the sea, who is desperate to believe their myths that she'll turn into an angel.

Molly: The newest ocean girl, who still remembers enough of her past to prove that the "angels" all the ocean girls worship aren't as benevolent as they seem.

Angst Checklist:
The Word: Despite my concern about reading Jackson Pearce after hearing about how slutshamey Sisters Red was, I've always been a fan of The Little Mermaid (both the Anderson tragedy and the Disney film) and hearing that Fathomless would be a modern retelling piqued my interest in spite of myself. Unfortunately, despite the cleverness of Pearce's adaptation, the ending was a silly, undeveloped mess.

Our "mermaid" is Lo - an ocean girl who lives under the sea with her sisters near an unnamed coastal tourist town. Lo used to be human once - all the ocean girls were born human - but her memories of her human life and how the angels changed her into a sea creature are hazy and indistinct. While she loves the ocean and her sisters, she longs for something more, but her kind have only two options. They can wait out their time, grow old, and turn into an angel themselves - or they can charm a human boy into the ocean and then steal his soul by drowning him, which has rarely, if ever, worked.

When a young musician falls off the pier, Lo's newest sister sees this as her chance to try and steal his soul. However, Lo, knowing this attempt will inevitably fail and only kill an innocent boy, has had enough with this tradition and drags him to shore. There, she meets a human girl named Celia, who grabs her arm before she escapes and mutters a name. Lo's human name. A name she's forgotten - along with the rest of her human memories.

Celia is one of a set of triplets who are attending boarding school in the area. Unbeknownst to everyone, she and her sisters Anne and Jane have psychic powers. By touching people, Anne can determine their future, Jane can sense their present thoughts, and Celia can see their past. Celia's always believed her powers are lame - what's the point of seeing someone's unchangeable past? - and has always felt somewhat separate from her sisters, who use their Awesome Powers to scam boys into buying them dinner.

When she touches the strange ocean girl who rescued the musician from the waves, she can see her past - including her name, Naida. Nothing about this strange girl makes sense, so when the paramedics arrive, Celia keeps Naida to herself and is thus mistaken for the boy's real rescuer.

Lo wants to meet Celia again, to see if Celia can find out more about her past - and Celia is also fascinated with Lo/Naida, and the possibility that her powers might not be as useless as she thought. Meanwhile, both girls develop an affection for Jude, the affable, impoverished guitar player they saved from certain death.

The story itself is interesting - and I really loved how Pearce worked the details of the original fairy tale (the false rescuer, the sisters, the mermaid's pain at walking on land, the mermaid's ultimate sacrifice) into a contemporary narrative. I also liked Celia's characterization - imagine having special powers that are still less special than your sisters'! I appreciated how she felt at once left out of her sisters' circle and inextricably bound to them, and how important it was to her to suddenly have something that was hers, just hers, that she didn't have to share with her loving, if controlling, siblings.

However, everything else - like Lo's characterization, the worldbuilding, and the ultimate payoff - were disappointing and nonsensical.

With Lo, once she remembers her human name and memories, her past self of Naida becomes a separate personality from her present mermaid self, which doesn't make a lick of sense and really confuses both half-characters. At the beginning of the novel, Lo wants to become human and know her human identity, but once she gets it, suddenly she's afraid that her present consciousness will have to "die" in order for Naida to get her life back. What? Because of this, Lo's character is only half-developed - her actual desires and motivations are baffling and unclear, especially once Lo and Naida start "fighting" about their future.

Similarly, the worldbuilding is just plain ridiculous. The mystery of the ocean girls' origins permeates the entire novel - who are these ocean girls? Who are the "angels" who took them away from their human lives? And why did they do it? These are the unanswered questions that kept me reading to the end.

The answers are disappointingly silly and undeveloped. It's obvious the "angels" aren't really the benevolent forces the ocean girls believe they are, but I certainly wasn't expecting them to be werewolves. Yes, you read that right, WEREWOLVES. They hunt for girls to render them soulless like themselves - except they have to, er, "stew" in the ocean as mermaids for a certain amount of time first to erase them of all humanity. When a mermaid is completely soulless, she emerges from the sea and turns into a giant, ravenous wolf.

Because wolves have everything to do with the ocean, am I right?

The monsters' payoff in this novel is just so random and shallow. No explanation is given for why a soulless, sea-dwelling creature would suddenly evolve into a completely unrelated, land-based monster who has never had any mythological or folkloric ties to mermaids whatsoever. Why wolves? Why not turtles? Or sharks? Or the Creature from the Blue Lagoon - or something that is in some way related to the ocean since it's a key aspect of THE ENTIRE NOVEL?

Of course, it's all swept under the rug with the half-assed, unspoken explanation of "They're Just Fantasy Monsters, Deal With It." Writing fantasy means you can write your own rules - it doesn't mean you can write without rules and expect the genre label to explain everything. You want to write a story where mermaids turn into werewolves? Fine - just so long as you explain and develop your core concept. Otherwise, how are we to understand the true situation and the stakes involved? Robin Hobb wrote an entire trilogy about how sea serpents are connected to dragons, and it made sense because she wrote about how and why it worked.

Honestly, by the end, the over-the-top randomness of the conclusion pulled me completely out of the story. While Fathomless started out strongly with an interesting twist on a beloved tale, it ended up with  undeveloped plotting, confusing characters, laughable worldbuilding, and a needlessly sad and unsatisfying payoff.
C-
Posted by AnimeJune at Sunday, May 05, 2013