This episode of Downton Abbey opens with Matthew at the front, stiffening his men's upper lips before the impending battle scene, which provides just enough gunshots and explosions to wake up your dozing male significant other on the couch and confuse the hell out of him about what you are really watching.

Matthew manages fairly well until he runs afoul of an exploding shell - but thankfully, like the lofty aristocrat he has become, he survives by using lower-class William as a human shield. 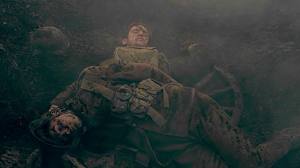 The feudal system at its finest.

The residents of Downton Abbey are shocked by this news, and Matthew is quickly transferred to the Downton Abbey hospital to recuperate. Although William's Doughy Innocence absorbed enough of the blast to save Matthew's life, it turned his insides into Yorkshire pudding. Because the British Class System is Horrible, the Obviously Dying William is shipped off to a Hospital for Poor People all the way out in Leeds.

Everyone at Downton Abbey is quick to remark that this development sucks an English Bushel of Dicks - even Thomas, who's been trying to give William the shaft (and not in the fun way) for years.

Enter Bad-Ass Mutha Violet. She confronts Dr. Clarkson, who spews his usual Mostly-Incompetent Nonsense about Fairness until Violet shuts his useless ass down. 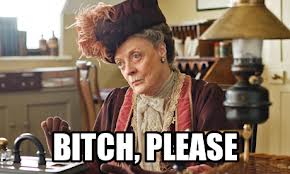 Violet departs and shakes the Privileged Aristocracy Phone Tree like a screaming toddler until William's transfer orders fall out. William lands back at Downton Abbey, which is awesome, and expresses his dying wish to marry Daisy, which is less awesome. Daisy doesn't actually love William, you see, but was pressured by the meddling Mrs. Patmore to encourage William's attentions because a broken heart would leave him vulnerable on the battlefield - a strategy that obviously didn't work.

Now that William is little more than a Sentient Bean Bag Chair, Daisy doesn't have much of a choice if she doesn't want to come across as a Horrible Selfish Hag (and I feel for her in this situation, I really do - I hate guiltships), so she agrees to marry William but not without inflicting her godawful Indecisive Mouthbreathing Fish Face on the audience for several scenes.

All the servants show up to the wedding, Daisy is dolled up to the nines, and Bad-Ass Mutha Violet unleashes the Kraken for the second time this episode to ensure the uppity vicar allows William's Make-A-Wish Wedding to go forward. Daisy and William kiss, and William departs into the afterlife, leaving Daisy a literal Virgin Widow. Don't worry folks, she'll be fine so long as she avoids rakes and Greek tycoons for the next couple of years.

Meanwhile, who should arrive at Downton Abbey but Crazy Wife Vera, who found out Bates returned to Downton thanks to a sneaky letter from O'Brien and Thomas. She took all of Bates' money but is still determined to ruin Bates' life because she is so Psychotic even Thomas and O'Brien feel bad for Bates and regret their part in luring her back.

Since Crazy Wife Vera's determined to leak the story of Lady Mary's Sex-Murdering shenanigans to the press, Mary bites the bullet and spills the beans to her fiancé, the Bear Knight Sir Richard Carlisle. Carlisle takes the homicidal-genitalia news surprisingly well - in fact, he now feels he and Mary can marry on more equal terms after he pulls her fatality-inducing ass out of the fire. However, he makes it clear that there will be no backing out of this betrothal. It's a little menacing and creepy, but it's Ian Glenn and he's irrepressibly charming and the scene of him screwing Crazy Wife Vera over is so incredibly satisfying that I just don't care.

But what about Matthew, you ask? Well, William's lower-class torso protected Matthew from death but unfortunately couldn't save Matthew's spine from injury. The doctor wastes little time informing Lord Grantham that everything below Matthew's waist is lifeless - including, he reveals, Matthew's Baby-Making Booty.

Once Mary finds out Matthew's junk has joined the ghosts of Grantham's previous Two Heirs aboard the Titanic, she rushes to his side to comfort him in his abyss of Extreme Whininess. I know I'm supposed to feel sorry for Matthew, and his injury is still really new to him, but two minutes into his "I'm a useless walking corpse and nobody will ever wuv me" speech and I'm Already Over It. 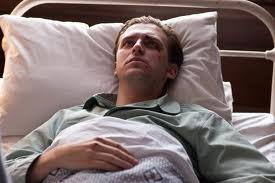 One good thing to come out of it - he dumps Rings on Her Fingers Lavinia, once he explains the situation of his Dead Booty. Poor Mary and Bells On Her Toes Lavinia share an endearing moment together where they both mourn the loss of Matthew's Upper-Crust Heir-Creating Booty. Still Possessing a Pulse Lavinia, however, insists that Matthew's Spinal Angst Injury won't keep them apart - she's still determined to marry him, Dead Booty or no. "I'll die if I can't have Matthew," says Not At All Foreshadowing Lavina.

Did I Miss Any Subplots? Oh Yeah:


Things I Liked
Things I Didn't
Final Remarks: All in all, this was one of the best episodes of the season. You had some significant and pleasantly over-the-top drama, a character death that made sense, tons of brutal set-downs from Heavyweight Champion Violet and Carlisle, and some thoughtful moral commentary - especially regarding William and Daisy's wedding.

Rating: Ten Emotionally Coerced War Brides Out of Ten
Posted by AnimeJune at Tuesday, May 14, 2013