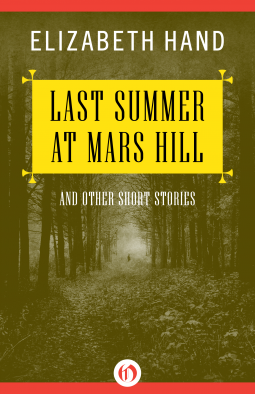 When Last Summer at Mars Hill came up on Netgalley, I immediately knew I wanted to read it. I'd read one of Elizabeth Hand's story collections before - the exquisite Saffron and Brimstone - and I figured this new story collection would be just as good.

It also wasn't that good. While Elizabeth Hand has a deft, er, hand with poetic language and vivid description, the stories in this collection come across as repetitive, turgidly paced, often self-indulgent and at times incomprehensible (particularly her science fiction entries). I found myself frantically doggy paddling towards the end, perpetually splashing but getting no closer to the final page.

Most of the stories have strong autobiographical elements, teenage narrators, and involve a similar story structure - lots of description and set-up at the beginning and a supernatural surprise reveal at the end. Because of this, most of the stories are rather top-heavy - the introductions are all filler and the narrative payoffs aren't worth the wait.

The anthology opens with "Last Summer at Mars Hill," about a pair of teenagers whose respective dying parents find a supernatural cure for their ailments at a spiritualist colony in Maine. However, the cure will last only as long as they remain there. Their parents' ultimate decisions are thought-provoking - but the actual plot and examination of life and longevity doesn't even start until relatively late in the story.

Next up is "The Erl-King," involving a teenage girl and her best friend who run afoul of a mentally unstable former rock star, an insidious evil, and a devil's bargain ticking down to a bloody conclusion. The story is slow to pick up, and hinges on a single exposition-heavy encounter that explains the entire plot in one gulp.

Elizabeth Hand explains in the author's note that "Justice" is one of her most controversial stories. Set in rural Oklahoma and heavily influenced by Greek myth, it follows a reporter trailing the story of a number of wife- and child-murderers who have gone missing. No one has found the fugitive men, but a strange number of mutilated pig corpses have turned up. You do the math.

"Dionysis Dentrites" is the one poem in the collection, a personal piece for the author based on a recurring dream she's had most of her life. Interesting but too brief.

Following that interlude is my favourite story in the collection, the whimsical "The Have-Nots." Told entirely in down-home dialogue from a chatty cosmetics saleslady, she recounts the story of how a downtrodden friend's life is changed - and eventually saved by - a Cadillac owned by Elvis Presley. Weird but delightful and brimming with empathy, it's a much lighter (and funnier!)  story than the rest of the entries in this collection.

"In the Month of Athyr" takes a trip into the seriously weird with a story aboard a space station where gender politics have been twisted almost beyond recognition. The protagonist is a teenage boy whose father brings aboard a genetically-engineered sex slave, triggering an incredibly unpleasant sexual awakening. The story makes so many vague references to other stories and incidents within the same universe that it cannot really stand on its own.

"Engels Unaware" is a deliciously satirical story of how a ruthless and greedy financial corporation (and all of its self-indulgent VPs, analysts, and office managers) destroys itself in the most flamboyantly over-the-top way possible - and all of it witnessed through the eyes of its lowly, mistreated temp, Rebecca.

"The Bacchae" is another tale the author gleefully describes as one of her most hated stories. Following in a similar vein as "Justice" - it draws from another Greek myth to switch gender roles as a strange lunar event causes all the women in the world to target and brutally murder men. The difference between "The Bacchae" and "Justice" is that "Justice" has an actual plot. "The Bacchae"'s meek, nervous male narrator simply grows more and more uneasy until his inevitable senseless demise at the hands of violent, drunk women.

"Snow on Sugar Mountain" melds science and fantasy in an interesting way in a slow and low-key tale about a teenage runaway with the power to shapeshift who seeks refuge with a retired, reclusive, and dying astronaut. It took me a while to warm up to this one, but I did enjoy the payoff.

"On the Town Route" is another story that irritated me with its long, overly-described lead-up to a Surprise Magical Climax Out of Nowhere. Our heroine, Julie, joins her close friend Cass as he drives his dilapidated ice cream truck through rural areas to distribute ice cream to impoverished families. Sounds nice - until summer ends and one of their customers reveals their true, Greek-myth-inspired colours.

The penultimate story is perhaps the least comprehensible in the collection - "The Boy in the Tree" apparently involves biochemically-enhanced autistic dream-eaters who are hired to devour the bad memories of psychologically-scarred people to help them heal. Our heroine - a dream eater - might be inducing these people into committing suicide. Or she might not. Or her doctor has been secretly sleeping with her own brother. Or not! Who knows? Not this reader.

The last story, "Prince of Flowers" is a rather standard tale of supernatural retribution enhanced by a superior writing style. An assistant curator at a museum who likes to steal inventory to display in her own home snatches a mysterious, creepy doll and reaps the horrifying consequences. While the writing and description is lovely - the depth of the story leaves much to be desired.

I wasn't altogether impressed by this collection. A few stories - mainly the ones that employ Elizabeth Hand's sharp humour - shine ("The Have-Nots," and "Engels Unaware"). Some are borderline incomprehensible messes ("In the Month of Athyr," "The Boy In The Tree,"), while others seem merely pointless ("The Erl-King," "On the Town Route").

If you are still curious about reading this (particularly if you adored previous collections like Saffron and Brimstone), I might suggest taking the 1998 edition out from the library first.
C-
Posted by AnimeJune at Saturday, May 18, 2013