This episode, you guys. THIS EPISODE. If you wanted to know the exact point at which the wheels fell off the bus of this season (if not the entire series), it's this episode. Almost this entire episode was one long uugghhhhh COME ON.

Let's start with the less UGHly parts: Mary is still helping Matthew pop wheelies in his chair, and this worries her fiancé Carlisle for Very Good Reason. His response to this is twofold - first, he tries to poach Mary's Unofficial Stepdad Carson to run his estate once he and Mary are wed, which is a rather sweet move. Secondly, he brings Breathing Normally Lavinia to Downton to distract Matthew's attentions. When neither of these completely works he outright tells Mary that he's not going to put up with her Moony-Eyed Bullshit, especially not now that he has the deets regarding her sex-murdering shenanigans.

Again, this doesn't ruin him for me because a) He's Ian Glenn, and b) He is Entirely Correct about Mary's feelings and she really isn't fooling anyone.

But then the ughhh starts. Firstly, Isobel's back at Downton. Word on the street says World War I is almost over, which means all the soldier patients can soon go home, but Isobel is determined to keep Downton Abbey open to the public so that it can be "useful" - conveniently forgetting that this Isn't Her Fucking House and Other People Live Here.

Seriously, Isobel is the worst. It's weird - last season, she was tolerable and I even kind of liked her because despite her progressive views and take charge attitude, she wasn't oblivious to social mores and had to kick her son's ass to get him to comply with them. In this season, she's turned into an insufferably naive and self-righteous martyr who is very easily tricked by Bad Ass Mutha Violet into abandoning her Downton Cause in favour of an even more Self-Righteous Martyry Project Involving Refugees.

Also, ughhhh, Crazy Wife Vera went to the courts and had her divorce with Bates overturned so they're still technically married. Can't Bates and Anna just buy their quaint little hotel and keep Crazy Wife Vera locked in an attic like Every Other Gothic Romantic Couple Does? Bates goes back to London to see if he can bribe some of the Crazy away, but no dice. He comes back saying his interaction with her went even worse than before.

But this isn't even a fraction of the UGHHHHHHH to come - no, now we must get Assface Mackenzie.

Assface Mackenzie, er, I mean, Patrick Gordon, is a Canadian soldier from the Princess Patricia Light Infantry who got his face blown off and has requested he convalesce at Downton because he "shares a family connection" with the Crawleys. Edith's assigned to take care of him and he spends a solid fifteen minutes making cryptic, illogical hints about how she should recognize him until he finally claims to be Patrick Crawley - the lost heir to Downton who supposedly drowned on the Titanic.

And seriously everything about this storyline is Horrible and Over the Top because Assface Mackenzie is the Worst Liar Ever, his story makes No Damn Sense, and Edith buys it hook, line and sinker because She Is An Idiot.

Apparently he was rescued from The Titanic by Canadians but caught Amnesia (yes, amnesia) which removed not only his memories but his Upper Class British Accent as well. He joined the Canadian army, and conveniently recovered his memories in the same explosion that inconveniently tore off his face. 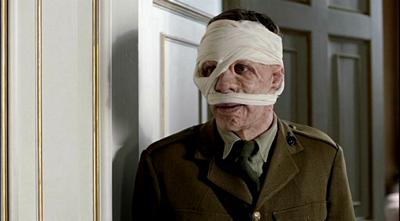 Now this is a face you can trust.

Seriously? Seriously? Edith runs to tell Grantham and the whole matter is taken Inexplicably Seriously despite the fact that every other character can see past Assface Mackenzie's obvious lie except for Edith, because she's That Desperate, and Matthew, because he needs another excuse to act like a martyr (clearly a genetic trait) about losing both the use of his penis AND the earldom.

The WORST thing about this storyline is that the writers clearly intended the truth of Assface's story to be uncertain. Assface makes this weird gesture with his fingers that Grantham recognizes. He acts all hurt that none of the Crawleys recognize him - why can't they just open their minds and see past the BLOWN OFF FACE and CANADIAN ACCENT? And when he flees at the end of the episode (once Grantham discovers evidence of a Peter Gordon from Montreal), he leaves Edith the vaguest apologetic note clearly meant to divide viewers as to whether it was for a) being unable to bear his family's doubt or b) being an Awful Liar whose Flimsy Con was Doomed to Fail from the Start.

Except it's not uncertain or ambiguous or unclear because it's a STUPID-ASS STORY. You're telling me he wasn't able to bear his family's doubt and scrutiny FOR THREE DAYS? You're telling me he's desperate to convince people he's a British peer - but not desperate enough to use an ACTUAL BRITISH ACCENT?

The worst thing about this storyline is that it's completely out of tone with the series up until this point. Yes, Downton Abbey was intended to be soapy and scandalous, but not entirely divorced from reality. Sure, we could expect premarital sex and blackmail and evil wives - but the Long-Lost Amnesiac Heir hails from the General Hospital wheelhouse. Ugh, indeed.

The only other thing worth mentioning about this trainwreck of an episode is that Matthew feels a suspicious tingle in his manparts after All Stats Normal Lavinia returns, but decides to keep it to himself to see what happens - and, oh yeah...

Some Sub Plots I Forgot to Mention:


Things I Liked
Things I Didn't
Final Remarks: I don't which which is worse about this episode - This Episode, or the fact that it only gets weirder and wackier from this one.

Rating: One Very Badly Burned Con Artist out of Five.
Posted by AnimeJune at Monday, May 20, 2013