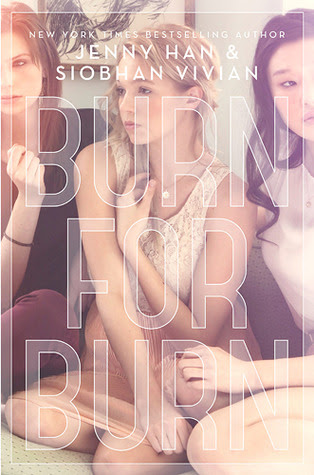 Kat: A lower-class girl who's had enough of being the butt of her ex-best friend's nasty numours.

Lillia: A member of the popular crowd who wants to protect her little sister from her own group's increasingly negative influence.

Mary: A mysterious girl who returns to Jar Island after years away to confront the boy who ruined her life.

Rennie: The Queen Bitch of Jar High who'll do anything to get what she wants - and she's not afraid to cast her former best friends aside to get it.

Alex: A popular football player who seems like a nice guy - until Kat apparently catches him fooling around with Lillia's 14-year-old sister.

Reeve: The school's popular bad boy and a total jackass.

Nadia: Lillia's little sister, with whom she used to have a close bond, until Nadia started lying and sneaking out late at night.


The Word: Revenge is a dish best served cold - but sometime it's even better when it's shared. In the small but economically diverse community of Jar Island, three girls from three very different backgrounds decide to team up to get payback against their tormenters.

Kat used to be childhood best friends with Rennie - until Rennie became the Mean Girl Queen Bee, threw Kat to the curb, and slandered her with disgusting rumours about her white-trash ways to clean up her own lower-class image. For years, Kat has been swallowing her anger and resentment, but for her senior year, she decides to make Rennie pay.

Unexpectedly, she finds an ally in Lillia - a wealthy girl and Rennie's BFF who, unbeknownst to Kat, is still recovering from the horrific results of following Rennie's lead. Now all Lillia wants to do is keep the same thing from happening to her little sister Nadia, a freshman cheerleader-to-be. When she finds out her little sis got drunk at her first party and spent the night with Alex, a senior boy she thought was her friend, Lillia decides Alex ought to learn a lesson about taking advantage of drunk girls.

Finally, we have Mary, a former resident of Jar Island who was forced to leave under mysterious circumstances when resident popular boy Reeve made her the target of his particularly vicious brand of bullying. Now she's back to stare her former tormentor in the face - and she's not the same girl she was when she left. Not by a long shot.

When these girls discover they all have a beef with a member of the popular clique, they decide to team up, in secret, and take down each member as a group, one by one.

Part of what I love about Burn for Burn is how unexpectedly complex it is, and how much history, setting, and background Vivian and Han convey in a relatively short time without compromising the main plot. Jar Island is a fascinating and diverse setting - with a social strata comprised of summer tourists, impoverished locals, renegade artists and old money families, and all of this confined to an isolated island whose only connection to the mainland is by ferry. Our characters have countless social and economic boundaries to jump across in their interactions with other people.

Nothing in this book exists in a vacuum - everyone has ties to everyone else. I was fascinated by the fact that Kat, Rennie, and Lillia all used to be best friends as children, and how the present-day Kat and Lillia interact from their now vastly different social spheres. Everyone has a background and a motivation - even (perhaps especially) the targets Alex, Rennie, and Reeve, which leads to understandable complications as our heroines have to really consider whether they should go forward with their revenge schemes.

Along with that, the book is excellently paced and addictive, and divides its narrative evenly between all three girls' viewpoints. There is plenty of scandal (both internal and external), important flashbacks, reflections on the nature of friendship, and even a sneaky paranormal element. Our heroines are definitely not perfect or even particularly moral, but they are incredibly charismatic, interesting, and likeable.

If I could find one flaw with the novel, I might wish that the ending was less of an abrupt cliffhanger - but at the same time, I like the idea of the trilogy reading more like one enormous story than three separate ones. Perhaps my opinion on this would be different if I didn't already have the ARC of Fire With Fire from BEA (although I have to wait until September to read it!).

If you're in the mood for a delicious beach read with superior characterization and a fantastically-realized setting, I can't recommend Burn for Burn enough.
A+
Posted by AnimeJune at Sunday, June 30, 2013