"Not Proper Enough," by Carolyn Jewel 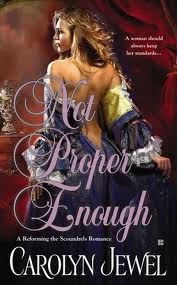 The Chick: Eugenia Bryant. Back in town to help an awkward but brilliant family friend succeed at the Marriage Mart, she has the misfortune to run into Fenris, the man who almost convinced her beloved (and now sadly deceased) husband to throw her over.
The Rub: Fenris now claims an affection for her - but can the still-grieving Eugenia bring herself to love anyone at all, much less her worst enemy?

The Dude: Grenville Foxman Talbot, Marquis of Fenris, a.k.a. "Fenris," a.k.a. "Fox." When he was young, proud, and stupid, he spurned Eugenia and ruined his friendship with Robert Bryant when he married her instead.
The Rub: Now he must fight against two overwhelming obstacles: Eugenia's understandable hatred for him and her love for her dead husband.

Fenris: I love you!

Eugenia: I hate you!

Fenris: Does that mean we can't have sex?

Eugenia: Of course not!

Eugenia: How many pages until the end of the book?

Eugenia: ... okay I guess this means I love you.

Romance Convention Checklist:
The Word: A few days before I started reading this novel (very kindly sent to me in ARC format by Carolyn Jewel), I had a conversation with Kate Elliott on Twitter about books that are "bad" versus books that simply aren't to the reviewer's taste, and how certain types of reviews can conflate the two. Certainly, terribly-written books aren't to anyone's taste, but one can dislike something without it making the book inferior.

I thought of this while reading Not Proper Enough, the second book in Jewel's newest historical series, the sequel to Not Wicked Enough. Is it badly-written? No.

Is it at all to my taste? Unfortunately, no.

Eugenia Bryant is returning to British society after the death of her beloved (truly beloved) husband, Robert, to ensure her young, clumsy friend Hester makes a good match. Unfortunately, she runs into her worst enemy - the Marquis of Fenris. Nothing surprises her more than when the despised Marquis defends Hester from a vocal bully at a social gathering - until Fenris confronts Eugenia and informs her that he'd like to be better acquainted.

It takes a rather absurdly long time to discover just why Eugenia hates Fenris so very badly and by the time we find out, it seems rather silly after such enormous build-up. As a younger man, Fenris fell in love with Eugenia but didn't pursue her because he believed she was too far beneath him, the son and heir of a duke. When his best friend Robert fell in love with Eugenia and courted her instead, Fenris did everything in his power to try and talk Robert out of the unequal match. He ended up humiliating Eugenia and destroying his friendship with Robert as a result.

Older and far wiser, Fenris desires another chance to win over the love of his life - but can Eugenia overcome her hatred for him?

The set-up sounds rather similar to Jewel's earlier novel, Scandal, where the hero begins the novel in love with the guarded, widowed heroine and spends the entire novel wearing her down. And indeed, Not Proper Enough is really one long, loooong physical seduction as Fenris and Eugenia begin an affair while he tries to win her heart in the bargain.

Here is where the "cup of terrible tea" versus "just not my cup of tea" concept comes in. The physical seduction and internal wrangling make up the entire novel, and there is little to no plot other than  Fenris' vague "Win Eugenia's Heart Through Great Sex" plan, and I found myself completely and utterly bored out of my mind. I found the endless physical descriptions and superficial banter dull. Other than the characters' Immediate Concerns (such as Fenris' love of Eugenia and Eugenia's grief from the death of her husband), the story doesn't delve very deeply into the lives and backstories of either character. Nothing really happens in this story and I found myself skimming after 170 pages.

Like Scandal, the romantic progression basically involves the hero begging over and over until at the very last minute the heroine says yes. But in Scandal, the novel explored the characters, their backstories, their non-sexual passions and interests, who they were as people, whereas Not Proper Enough just seemed to skim the surface. In Scandal, their seductions, interactions and dialogue had more meaning and depth because I understood the characters better.