"The Kingdom of Gods," by N.K. Jemisin 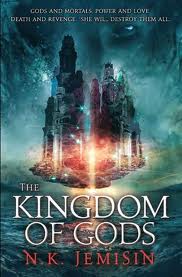 Sieh: The God of Childhood, eldest of the lesser godlings created by the Three. Despite being alive since existence began, he is lonely and aches for something more, so he befriends a couple of children, an action that has unforeseen consequences.

Shahar: Befriended by Sieh, despite being Heir of the ruling Arameri family - but she is determined to try and rule fairly and justly, and overturn the belief that Arameri are calculating, heartless monsters.

Dekarta: Shahar's distrusted brother. Sent off to become a powerful wizard, he still maintains his connection to his sister - and Sieh.


Nahadoth: God of Darkness and Chaos. Sieh's father. Loves him, but as the God of change, he cannot protect Sieh from the march of progress.

Yeine: The new Goddess of Balance. Trying to bring the Three back together again - including Itempas, who started the Gods' War.

Itempas: The God of Light and Order. Enslaved his fellow gods and godlings for thousands of years and is only now starting to pay the price for it - but will he ever be forgiven?

Glee: Itempas' daughter by Oree Shoth (the protagonist from The Broken Kingdoms). Manages his business in the mortal realm.

Ahad: A mysterious, bitter godling with painful ties to Sieh and Nahadoth.

Fantasy Convention Checklist:
The Word: This was not the review I thought I would be writing for the final book in N.K. Jemisin's Hundred Thousand Kingdoms trilogy.

I adored the first two books - The Hundred Thousand Kingdoms and The Broken Kingdoms. I didn't understand how the third book, Kingdom of Gods, could be so drastically different.

Previously, on The Hundred Thousand Kingdoms:

In this world, there were three major gods - Nahadoth (darkness, chaos, change), Itempas (light, order, stability), and Enefa (twilight, balance, death, rebirth), and their various godling children. Itempas went nuts and murdered Enefa, imprisoned and enslaved Nahadoth and the godlings, and gave power over them into the hands of his chosen people, the Arameri, who, for 2000 years, built an unstoppable empire using the gods as weapons.

In The Hundred Thousand Kingdoms, a mortal woman, Yeine, freed the gods and became the newest incarnation of Enefa, bringing balance and restoring the Three. In The Broken Kingdoms, Itempas (reduced to mortal status as punishment) set about redeeming himself with the help of Oree Shoth and stopped a conspiracy to murder the gods using the tainted blood of demons (god/human halflings).

Kingdom of Gods is Sieh's book - Sieh is the eldest of the Three's godling children, the God of Childhood. He's pretty much the deified equivalent of Peter Pan - mischievous, changeable, playful, cruel and sociopathic on occasion. Lately, however, loneliness has been devouring him from the inside out. While he adores his parents, Nahadoth and Yeine (who's more of a godly stepparent now), he knows he can never be one of The Three - because this particular universe can only support Three. Because of this, Yeine has actually been making tentative moves towards forgiving Itempas and bringing him back into the fold.

Outraged by this, Sieh flees to make mischief in the mortal realm and winds up befriending two children, siblings Shahar and Dekarta. Despite the fact that these children are Arameri (the ruling class who enslaved the gods for thousands of years), Sieh decides to make a friendship pact with them - but when they slice open their hands to make a blood oath, something goes drastically, terribly wrong. When Sieh wakes up, eight years have passed, Dekarta has been banished, Shahar is sixteen and Angsty - and Sieh has, inexplicably, become mortal. And capable of growing up.

Neither Nahadoth nor Yeine can fix or stop Sieh's aging process, and Sieh is still too angry with Itempas (the god of stability and preservation) to ask for his help.  Meanwhile, he discovers the dynamic of his friendship with both Shahar and Dekarta has been understandably and awkwardly changed by the onset of physical and mental maturity (on all their parts).

Now, I've always liked Sieh as he appeared in his minor but crucial roles in the first two books. And I thought it would be interesting to finally have a novel told from a god's perspective (the first two are told from Yeine's and Oree's POVs). However, despite my love of the first two books and my interest in the character, Kingdom of Gods was horrifically dull, disorganized, and inconsistent. If not for my interest in how the trilogy would end, I wouldn't have finished it.

First of all, the time jumps crazily for the first half of the book. One minor thing will happen, then Sieh jumps ahead one year. Then another. Then eight years pass. Then he sort of peaces out for another two years. I can sort of understand that from an immortal's perspective time doesn't mean the same thing, but the result is a plot that remains half-baked and only partially developed for a huge initial chunk of the book. How are we to understand Dekarta and Shahar as characters when we only see them for two pages and BAM! They're suddenly older and more experienced?

Similarly, the entire concept of Sieh's new condition ("mortal-ish?") is never really developed or explained. His physical and magical limitations seem to vanish or appear on a whim - one day he's in danger because he's unable to call magic, then on another he can summon enough power to kill a room full of people because he's in a bad mood.

As well, I think the use of godly POV might have hindered the character development - at least for me. Gods are supposed to be Everything and Nothing - a mixture of different things, complex, and changeable. However, in the first two books, I felt I understood Nahadoth and Itempas more clearly as characters because they were viewed from the perspective of mortals who like to define and identify things. The mortal perspective and projection of personality allowed me to see the two complex immortal figures within a sort of personality framework that allowed them to be more real and identifiable.

From Sieh's perspective, however, he's always changing, all the time, suddenly he's caring, suddenly he murders a roomful of people, now he loves children, now he hates children, now he wants to have sex, now he wants his mommy - he just kept waffling and I never got a sense of him as a character. His only consistent traits were Angst and Loneliness, and those get really old, really fast when the novel is more than 300 pages long with pacing that moves slower than molasses.

Yes, this book was slooooow. So very, very slow. The meandering, episodic, uncertain storyline meant this novel seemed to spend a lot of time doing very little. The plot takes a long time to find its footing, and even when it does, it seems arbitrary. The Big Bad is a totally random, underdeveloped villain who is entirely unconnected with the previous books and whose Master Plan is disappointingly predictable.

Honestly, I don't think I could have been more disappointed. Yes, the conclusion wraps things up in the trilogy in a vague way, but the novel itself doesn't seem very connected with the previous books - it's almost a standalone, a spin-off, that's only distantly connected to its predecessors by the abrupt, violent end.

By all means, if you're a loyal reader and want to see how the trilogy ends, read Kingdom of Gods. But in my opinion, you really don't need to.

Disagree? You can purchase The Kingdom of Gods here.