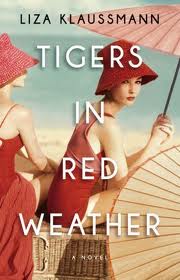 Nick: A strong-willed and enterprising woman eager to explore the world now that the war is over - although she eventually capitulates to her husband's wishes to start a family.

Daisy: Nick's young daughter whose life and goals abruptly change after she discovers the body of a murder victim as a child.

Helena: Nick's weak-willed and despicably envious cousin, whose marriage to a callously abusive movie producer leads her down the path of drugs and delusion.

Hughes: Nick's husband - he still loves his wife, but worries that he's thrown away his last chance to change into the exciting person that he could have been.

The Word: Tigers in Red Weather is the sort of novel that starts out slow, even depressing, only to slowly pick up speed and become a clever and ultimately satisfying read.

The novel zips back and forth between several dates from the 1940s, '50s and '60s and involves several different point of view. The central character is Nick, a vivacious and free-spirited woman from Martha's Vineyard who spends her summers at Tiger House, her family's stately summer home. Her POV portion of the novel is first, so we see her as a woman excited by the unknown future, by the freedom promised by the end of the war, only to slowly settle for stifling conventionality in order to please her husband, Hughes.

This raw and painful beginning distressed me at first - I am definitely not a fan of How Sad Rich Married People Suffer novels. The last one I read was Motherland and reading that novel coincided with one of the most powerful and terrifying depressive episodes I have ever had in my life, and so I had no desire to read anything even remotely like it.

However, as the novel progresses, the POV shifts to Nick's daughter Daisy, her cousin Helena, her husband Hughes, and her troubled nephew, Ed, and we spend the rest of the novel seeing Nick from different perspectives and at different points in her life, through the lenses of envy, adoration, obsession, and fear.

While the novel skips and jumps over several periods in Nick's life, the focus rests on three particular events - the state of Nick and Hughes' marriage at the end of the war, a hot and tumultuous summer in the '50s when Daisy and Ed discover the corpse of a murder victim, and finally a point in the late '60s where the family reunites at Tiger House to celebrate Daisy's impending nuptials.

As each POV outlines a particular situation, a later chapter from a different POV will fill in the blanks, each character adding their own layer of perspective to Nick's life, marriage, and family. I enjoyed this tactic very much - it kept up the pace of the story and developed the characters and themes in an interesting way. I found myself reading faster and faster as the jigsaw puzzle pieces were filled in, eager to see how a particular character approached and interpreted a familiar situation.

This tactic wouldn't have worked half so well if not for the well-realized, flesh-and-blood characters, especially Nick, who even while being smothered by the upper-middle-class life she once claimed to despise, is a sharp-eyed force to be reckoned with. And her husband Hughes, who is possessed by nostalgia for the man he used to be at the same time as Nick handles her urgent desire for progress, her wish to change into the woman she could be. Theirs is a troubled marriage but, as we discover, not an entirely unhappy or loveless one.

Liza Klaussmann also conveys a lovely sense of setting and time without using oodles of descriptive language or resorting to the hoary, obvious cliches of the time period to indicate the historical setting of the novel. None of this "oh I picked up a random newspaper today and John F. Kennedy is dead!" nonsense.

Tigers in Red Weather is a novel that can be both appreciated and enjoyed. It's got the breezy, mysterious, privileged setting for the beach reader, as well as the subtle character permutations and historical themes for the literature lover curled up at home. While it's a slow burn, it's a burn that lasts.
B+

You can purchase Tigers in Red Weather here.