"The Girl Most Likely To..." by Susan Donovan 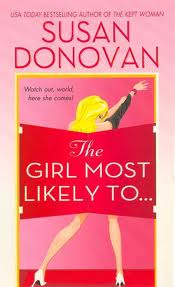 The Chick: Kat Cavanaugh, a.k.a. "Kat Turner." When she was sixteen, she got pregnant and was abandoned by everyone she trusted. Now wealthy and successful, she's determined to prove to everyone how wrong they were about her.
The Rub: Her revenge against the love of her life, Riley Bohland, backfires when she realizes she's still in love with him.
Dream Casting: Elizabeth Banks.


The Dude: Riley Bohland. After belatedly learning he has a son and fruitlessly trying to find him, he's furious when Kat comes back into town to rub it in his face.
The Rub: He realizes he was wrong to drive her away - but how can he win her trust again when he's secretly a million dollars in debt?
Dream Casting: Joe Manganiello.

Riley: OMG, how DARE you take my child away from me!

Riley: YOU AN UNFORGIVING, COLD, BABY-STEALING WITCH - and I'm still in love with you!

Aiden, Riley and Kat's Lovechild: AND I'm going to sulk about your womany lies and make you feel bad for a couple of chapters.

Kat: Are you kidding me?

Abusive Father: Did someone order a climax with a loaded gun? *dies*

Kat: IS THIS ACTUALLY HAPPENING OR DID I TAKE CRAZY PILLS?

Romance Convention Checklist:
The Word: When Kat Turner, nee Cavanaugh, was sixteen, she discovered she was pregnant, her aunt threw her out of school, her battered mother threw her out of the house in favour of her abusive father, and the love of her life (and babydaddy) Riley Bohland coldly dumped her, all in the same day. She fled her small town of Persuasion, West Virginia, uncertain if she'd ever return.

Twenty years later, she is all set to enact her perfect revenge fantasy. Thanks to a hell of a lot of good luck, she fell in with the right people and managed to build a pretty solid life for herself and her son, Aidan. Recently, having come into an unexpectedly enormous inheritance, Kat decides now's the perfect time to swing back into Persuasion, filthy rich and fabulous, to rub her good fortune in the faces of everyone who turned their backs on her. Oh yeah, and to tell her good-for-nothing high school sweetheart Riley that he'd fathered her child before he dumped her.

The trouble is, somehow Riley already knows about his secret baby, and he's furious with her. I'll warn you - there is a lot of male entitlement at the beginning of this novel, lots of Riley ranting about how Kat "stole" his boy (not their boy) and how Aiden should have been raised a Bohland in the Bohland way, and that Kat's a cold, hard bitch for keeping Aiden from him out of spite.

I'll now take a moment to explain that Riley dumped Kat the night she was going to tell him she was pregnant, and intentionally did so in the coldest way possible, because his daddy threatened to take away his car.

He dumped his girlfriend, the admitted love of his life, for a car. Yes, he was sixteen, but so was Kat, and Riley wastes an absurdly long time in this novel before he bothers to give Kat even the barest amount of slack for choosing to raise her child away from the town where she a) was thrown out of school, b) was terrorized by an abusive father c) was kicked out of her home, and d) placed second behind a car.

Okay, so it's not that bad. Riley realizes he's still in love with Kat, and she him, pretty early on in the novel, and there's a surprisingly tender scene where he sees a picture of his college-aged son for the first time and cries - not just for the years he missed raising his boy, but also for the twenty years he could have had with Kat. And while I did have problems with how everyone (including Kat) initially piled on her for deciding to abandon their faithless asses to raise her baby on her own terms, the novel does slowly, gradually address everyone's shades of grey in that situation as the characters develop.

That being said, while the novel starts out strong, with excellent dialogue, loads of emotional drama, and colourful characters, it slacks off pretty quickly. Riley and Kat realize they still love each other almost immediately, so the remaining obstacles are taken up one by one, relay-style, by Riley's Psychotic Stalker Ex, a Big Misunderstanding instigated by Riley's Psychotic Stalker Ex, Aiden's angst at discovering he's a Secret Baby, Sudden Trust Issues stemming from Kat discovering Riley's a million dollars in debt, a Mildly-Obsessed Baker who decides to blackmail Riley's Now-Ex-Psychotic Stalker Ex to break up a secondary romance, a Completely Ridiculous Secret Parentage Conspiracy Reveal, and finally Kat's Monstrously Abusive Father.

With so many of the issues coming from outside the relationship, the romantic plot felt contrived. There was some nice emotional development by the end but I felt that most of the time that could have been spent on character and romantic development was sucked up by outside drama. And while I do enjoy outside drama, it shouldn't overpower the two characters' paths to love and when they practically start out the novel on the threshold of the HEA, I don't see how much further they can go.

The Girl Most Likely Too starts out strong, has dynamic writing, and deals with some pretty dark issues, but it ultimately left me unsatisfied.

You can purchase The Girl Most Likely To... here.